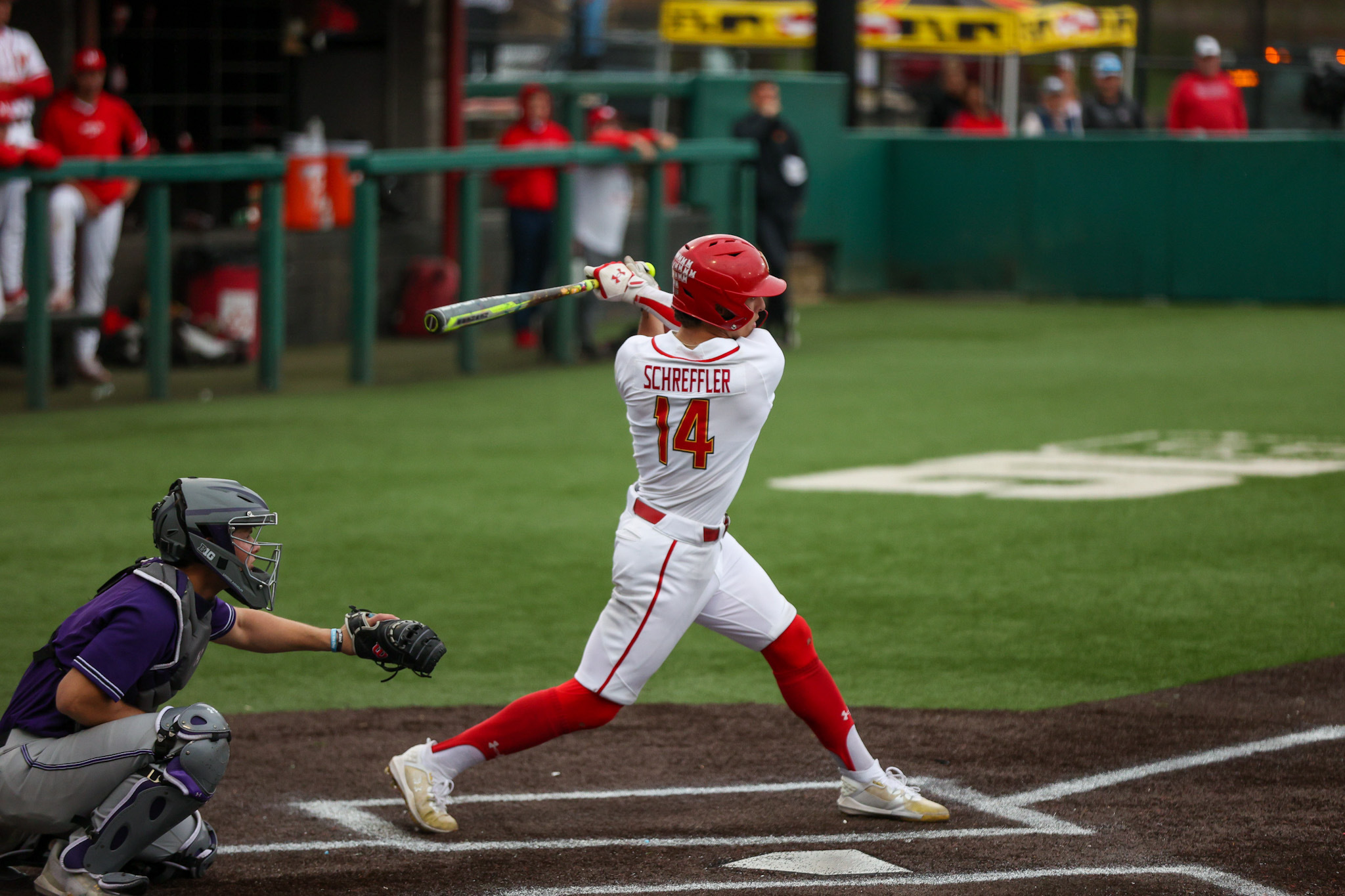 Troy Schreffler swings at a pitch during Maryland baseball's win over Northwestern on Sunday, May 1. (Cam Andrews/The Diamondback)

Michigan’s Clark Elliott frustrated Maryland. The outfielder played smart baseball — taking plenty of pitches to get on-base and swiping bags when given the opportunity.

Elliott played unselfishly. He hadn’t gotten the chance for the spotlight yet, but he would.

And it would down the Terps.

Rocketing a two-run dagger several rows back in right, Elliott padded his team’s already hefty lead in the seventh and stalled a comeback attempt from Maryland baseball.

And Michigan took their next step towards its common goal with Maryland, blasting the Terps, 15-8, in the second round of the Big Ten tournament.

The Terps will have to fight from behind to win the tournament in the loser’s bracket.

Coming off an inspired extra-innings resistance from the eighth-seeded Indiana Hoosiers, Maryland took a quick turn the next day into facing fifth-seeded Michigan in the late hours.

The Terps eviscerated the Wolverines at the plate in their last matchup, scoring 43 total runs in a three-game sweep of Michigan. But the stakes of the Big Ten Tournament Friday night made for a much more competitive battle.

Ryan Ramsey took the mound for Maryland, hoping to improve on a six-walk, four-hit outing in his last start against the same Michigan team — his worst of the season.

The Wolverines picked up right where they left off with Ramsey.

After both teams exchanged scoring hits — a RBI double down the left-field line in the first frame for Michigan and an RBI single from Bobby Zmarzlak in the second — both teams captured eyes in the third.

Kevin Keister smashed a 2-1 pitch over the far-left fence to give the Terps a one-run lead. But that’s all Maryland managed. Michigan’s Clark Elliott helped electrify Michigan’s offensive approach in the bottom half.

Elliott had already helped the Wolverines put up a run in the first with a walk and a stolen base to set him up to run home. He worked the same script in the third with another free pass and swipe of second.

Then he grabbed third on a pickoff error and scrambled home on an RBI single that helped catalyze a four-run rally for the Wolverines.

A misfire from Nick Lorusso on a throw to second that could’ve ended the frame didn’t help either. It scored a run, and Michigan quickly jumped back with a two-RBI double for a 5-2 advantage.

Maryland struck back with a two-RBI roller up the middle of the diamond from Luke Shliger that was helped by several walks as Michigan continued to rotate pitchers on the night.

“We got punched in the mouth a little bit,” coach Rob Vaughn said in a mid-game Big Ten Network interview. “[Ramsey] gets kinda banged around and it’s our job as an offense to pick him up.”

The Terps stopped there, but the Wolverines picked up right where they left off in the third. Michigan unleashed a flurry of hits after Ramsey helped with a hit-by-pitch and another walk of Elliott. Three straight hits crossed Elliott with two other Wolverines and Ramsey took his leave early.

“[Ramsey] just didn’t command the ball great tonight,” Vaughn said in the same mid-game interview. “Behind a lot of hitters, too many freebies…just didn’t quite get in the rhythm that he’s been in tonight.”

Nick Robinson turned the ball over to his offense, but not before another pair of runs scored to make it 10-4. Maryland was in dire straits.

Troy Schreffler sparked hope. The outfielder stepped into the box with two runners on and quickly found his pitch. Schreffler cracked it down the left-field line to clear the bases and Maryland inched closer to tying. Zmarzlak added an RBI ground-out to get the Terps to 10-7.

The Terps were valiantly chasing the Wolverines. Nick Robinson steadied the ship a bit with a pair of scoreless frames and Schreffler added a solo shot for further support.

It didn’t matter. A five-run seventh included homers from Tito Flores and Elliott as Maryland’s pitching went awry in its comeback bid.

The score built to 15-8 in Michigan’s favor. The Terps had no more tricks up their sleeve as they dropped their first game of the postseason.

Maryland loses its safety blanket with the drop into the loser’s bracket and will face a rematch with Indiana at about 1 p.m. Saturday.