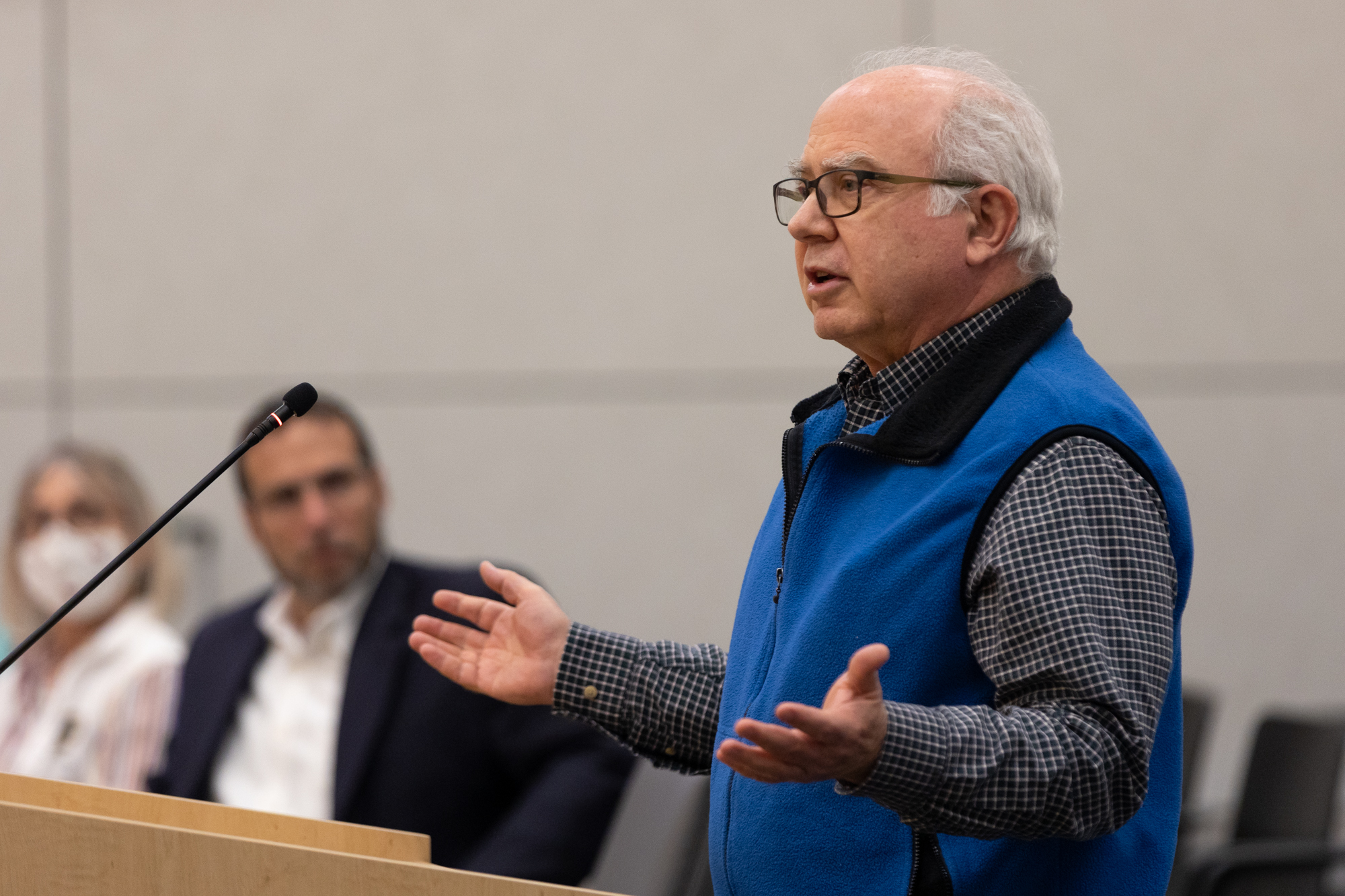 College Park residents express both support and concern for new tree ordinance during the College Park City Council meeting on May 10, 2022. The new legislation will require that residents receive permits to prune or remove trees on their properties. (Cam Andrews/The Diamondback)

The College Park City Council voted during its Tuesday night meeting to pass a tree protection ordinance that will require residents to get permits to remove or prune trees, with the goal of preventing tree canopy loss in the city.

Under the new ordinance, permits are mandatory for residents who prune more than 20 percent live wood or take out trees.

Residents who violate the ordinance must pay a penalty fee of $1,000 and residents who fail to plant a replacement tree or to pay the original fee will face an additional fee of $1,000. Council members voted Tuesday to reduce the fee to $500 from when the ordinance takes effect on July 1, 2022, to Feb. 1, 2023, so residents have time to learn about the guidelines.

Permits for the removal of “residential trees,” with a circumference between 36 inches and 80 inches will only be issued in certain situations, such as if the tree is dead, diseased or hazardous or if the tree is deemed an invasive species or the tree is “objectively determined” to adversely impact the property, according to city documents.

Removal permits will also be issued if the tree is located close enough to a house or utilities to cause structural damage, or if the tree makes expansion of the house difficult. A permit to remove a healthy “heritage tree,” with a circumference of more than 80 inches, can only be issued if its location would prevent the expansion of a house.

Pruning permits will be considered by the city’s public works director or another designated official for approval who will consider the tree’s health, potential hazards, the desirability of preserving the tree, the significance of the tree to preventing environmental degradation and the status of area’s the tree canopy, as well as “other applicable law,” the ordinance states.

The ordinance was drafted following a report that College Park’s urban forest and tree canopy is “under threat” due to new construction and individual tree removal. The study found the tree canopy in the city declined from 44 percent in 2009 to 38 percent in 2018.

Mayor Patrick Wojahn said the study was a “wake-up call” for the city to act on the environmental threat.

“I want to make clear, one thing we’ve said time and time again in response to some other concerns raised is that this is not the only part of our strategy for reviving, restoring the tree canopy,” Wojahn said. “This is one critical cornerstone of that strategy, but it is only part of the strategy.”

Some College Park residents, including Mary Cook, said they believed the ordinance’s penalty fees are excessively high during the meeting.

“Such exorbitant fines can cause mental and financial duress. Such fines could be a person’s entire paycheck for a month,” Cook said. “In the end, while you’re intent on saving a tree, you may ultimately be losing residents, residents who no longer feel safe living in College Park under such legislation.”

Resident Carol Macknis expressed support for some aspects of the ordinance, but worried residents will not be aware of the change.

“This whole city is not doing their job to educate these residents to what’s going on,” Macknis said Tuesday night.

Mitchell added she had “reservations” about the excessive fee and the ordinance’s effect on homeowners, which caused her to vote against it.

“I will do my due diligence, if this ordinance is passed … to educate my residents on how this ordinance will affect them and work in collaboration with my other colleagues to ensure that it is implemented in the correct way,” Mitchell said.

District 3 council member Stuart Adams said he believes “significant changes” have been made to the ordinance following residents’ past concerns.

“This is the toughest decision I’ve had since I’ve been on the council,” Adams said. “I would prefer a more streamlined permitting process, but we’ve got to have a process where people replace their trees because I don’t see it as I walk through the neighborhoods.”