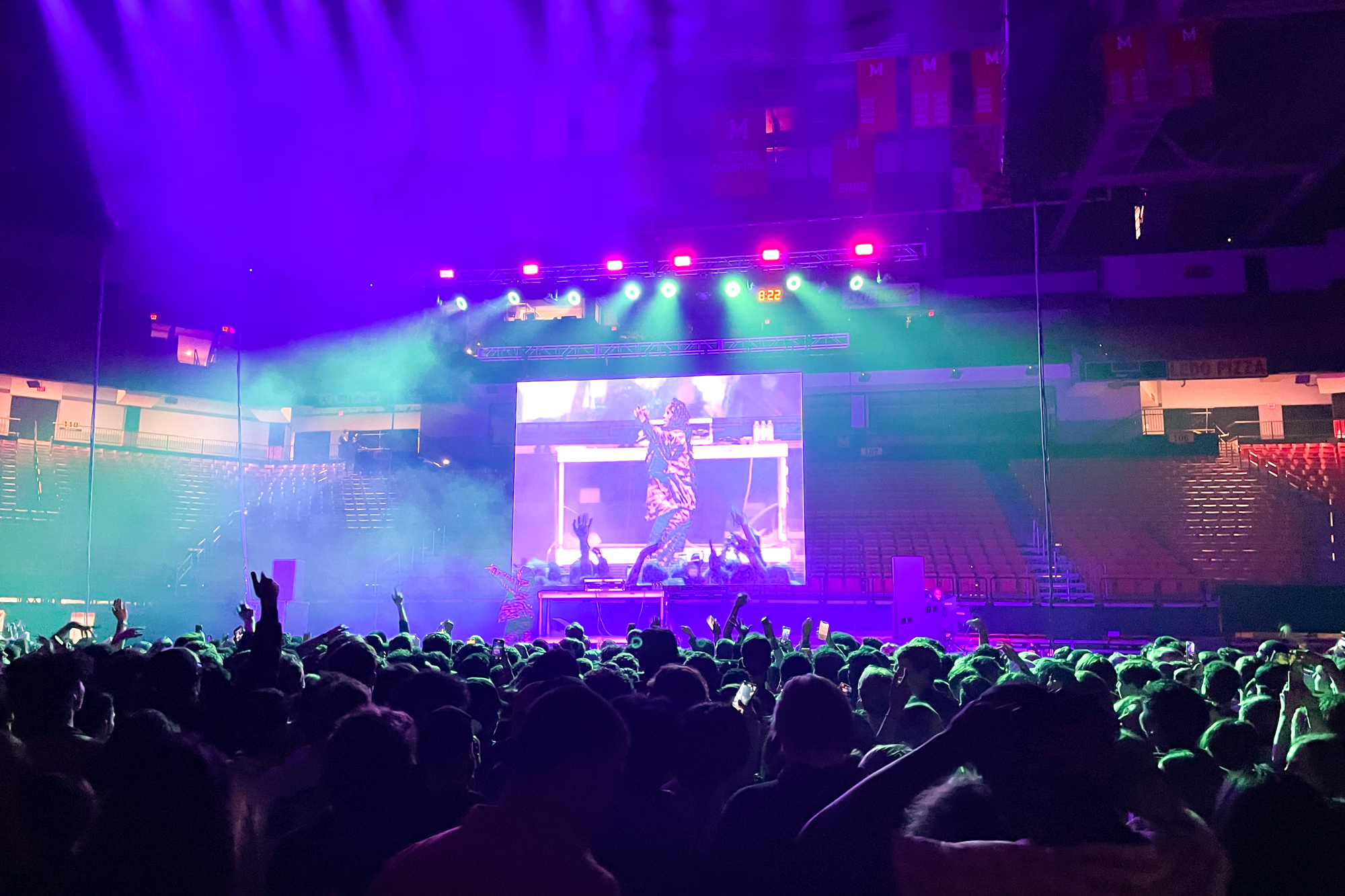 A crowd watches as Flo Milli performs during SEE's Art Attack show in Xfinity Center on May 7, 2022. (Avery Alexander/For The Diamondback)

The University of Maryland hosted its 38th Art Attack Saturday, despite inclement weather canceling the majority of its daytime events.

Art Attack was originally set to host the daytime festival on the University Recreation and Wellness fields. Instead, there were giveaways hosted in the Student Involvement Suite in Stamp Student Union along with free caricature drawings and a hair tinsel station.

Neal Dedicatoria, a junior economics major, enjoyed the event and walked away with a caricature.

“I’m glad they did have something regardless of the weather,” he said.

As typical of Art Attack, the last event of the day was a concert at Xfinity Center, this year featuring rappers Flo Milli and Polo G.

Before the concert began at 8 p.m., students lined up in the rain outside of the venue before being allowed in the building.

Sierra Hall, a sophomore hearing and speech sciences major, said she was excited for the concert despite the weather and had been planning to attend since the tickets were released on April 1.

“As soon as the tickets dropped, I bought the ticket,” Hall said.

Hall was originally supposed to perform at the Art Attack day events with her a capella group. She said because of this, the concert was the main part of Art Attack she planned on attending.

Dedicatoria said going to the concert was a spur of the moment decision. He said he would not have considered himself a fan of Polo G or Flo Milli and was unsure about venturing into the rain.

“I didn’t really want to walk, and I feel like driving wouldn’t be a good option,” Dedicatoria said. “I was definitely leaning towards not going, but I’m glad I ended up going.”

Flo Milli was first to perform at the event. She performed many of her hits alongside an unreleased song from her upcoming album.

After her performance, Flo Milli greeted members of the audience and took pictures with some of the attendees.

During his performance, Polo G featured music from other artists and there were two surprise appearances from rappers Shordie Shordie and Wale.

Wale, who is from Washington, D.C., performed his portion of the song “No Hands,” which was released by Waka Flocka Flame and Roscoe Dash.

Max Nguyen, a sophomore management major, said he was very surprised when Shordie Shordie and Wale took the stage.

“When Shordie Shordie came out, I was actually so hyped,” Nguyen said. “Respect to the DMV rappers.”