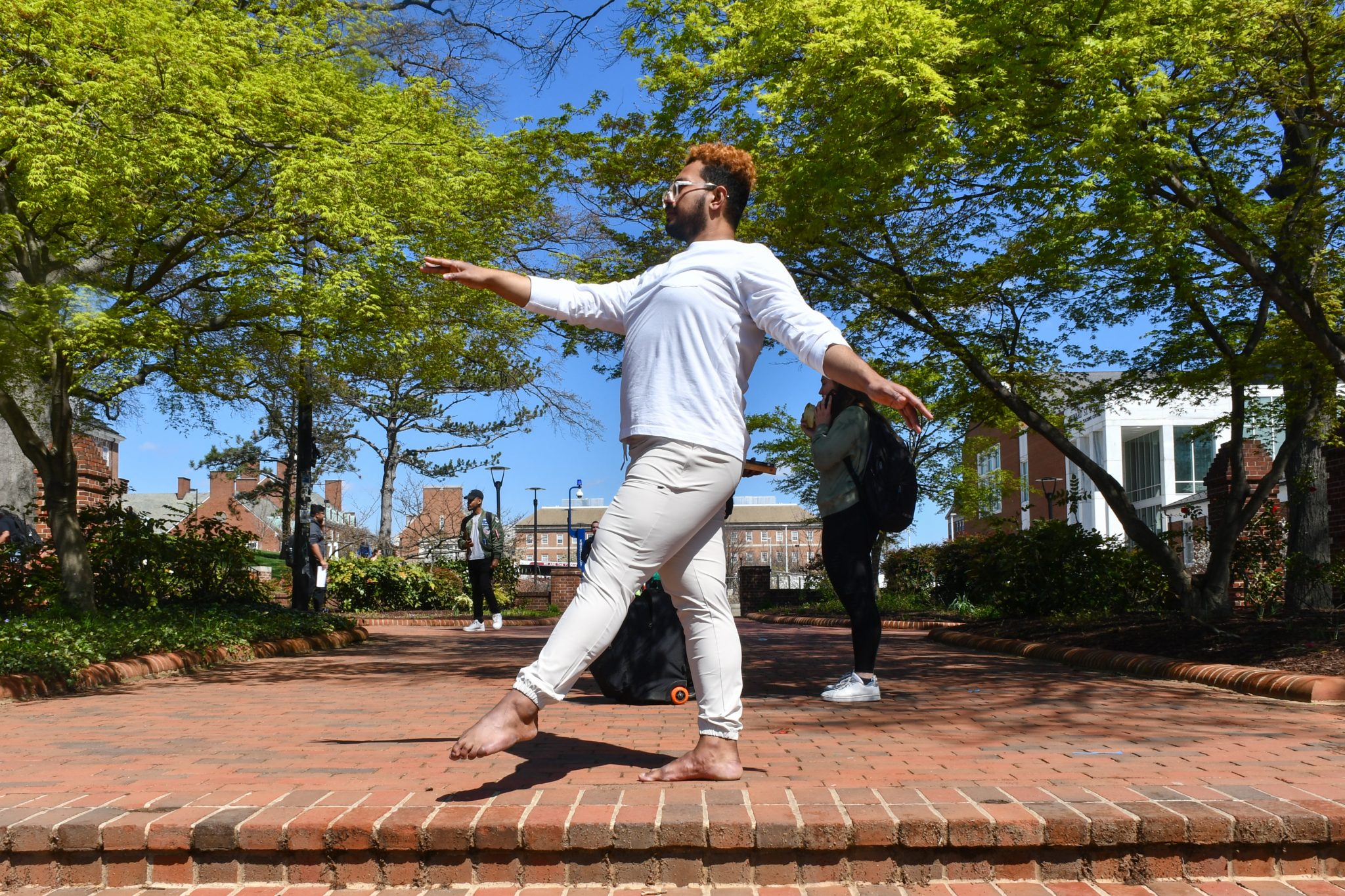 A performer strikes a pose in an art demonstration held on McKeldin Mall on April 8, 2022. (Nene Narh-Mensah/For The Diamondback)

A group of human sculptures appeared on McKeldin Mall Friday when artist Heidi Latsky presented “On Display” for the University of Maryland community.

Latsky’s “On Display” is a human sculpture court where the performers are the sculptures. The exhibit’s goal is to display and celebrate people with diverse bodies.

“This is not as diverse as I would love it to be, but it’s diverse enough to see people really of all ages, colors, disabilities being that vulnerable and fierce at the same time,” Latsky said.

On Friday, a group dressed in all white appeared in the center of McKeldin Mall. The exhibit was mounted for over an hour in the central walkway through the mall. There were signs mounted all along the walkway so that students, faculty and others could read about the display.

Briti Nebhnani, a freshman computer science major, said she heard about the opportunity to participate in this exhibit from one of her dance teachers here at the university but was already a longtime fan of Latsky’s work.

Nebhnani said many of her poses were inspired by her classical Indian dance training.

“The best part was definitely seeing people’s reactions, trying to see them figuring out what’s going on,” Nebhnani said.

The performers in the exhibit were encouraged to take poses that worked for them and oscillated between positions when they could not hold a pose any longer. This created a moving sculpture garden where the human sculptures took a variety of different poses.

The participants came from different backgrounds and represented members of the University of Maryland community, as well as Washington, D.C., Maryland and Virginia.

Pixie Ortiz participated as a sculpture in the exhibit after only hearing about it the morning of.

Ortiz is a senior dance major and has a background in ballet, so many of their poses were inspired by ballet extensions that were diminished.

“Our prompt was to treat it as a meditation and for me ballet is very meditative. So for me, when you say meditate, I think balletic,” Ortiz said.

Ortiz took a very open position as a sculpture at the top of a staircase leading down into McKeldin Mall. He enjoyed participating in this exhibit because it made them feel like a star and enjoyed seeing audience members educate themselves on the exhibit by reading the signs posted all around.

Vivian Tang, a graduate student in the human-computer interaction program, attended the exhibit in support of one of her professors who took part as a sculpture.

Tang said she has seen human sculptures before, but it has always been on an individual sculpture scale rather than a group like in “On Display.”

“I think it brings the message to life because it’s an actual human, it’s easier for the audience to relate to them,” Tang said. “It’s easier to empathize with it.”