Here’s what the Roe v. Wade opinion leak means for abortion in Maryland 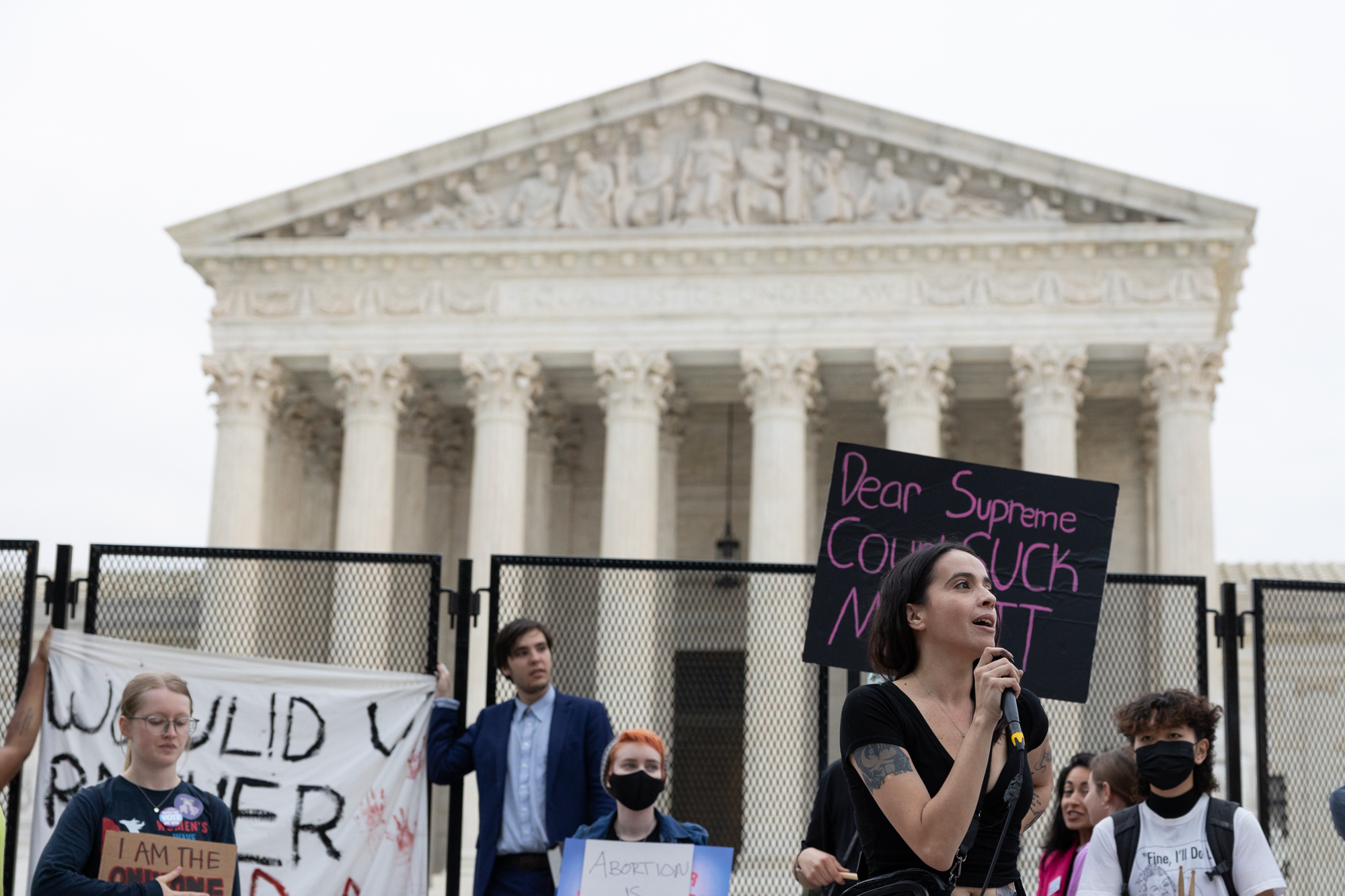 People gather outside the U.S. Supreme Court for a Repro-Rights rally to protest a leaked draft opinion that would overturn the landmark Roe v. Wade decision on May 5, 2022. (Cam Andrews/The Diamondback)

A U.S. Supreme Court ruling that might strike down the right to abortion in the U.S. could lead to strict restrictions or bans on abortion in 26 states, but Maryland will likely uphold state protections for abortion after efforts to expand abortion access and providers this legislative session.

The court has not formally overturned its landmark 1973 Roe v. Wade ruling, which serves as the foundation of American abortion rights — but a draft opinion leaked to Politico on May 2 suggests a majority of justices are headed that way.

Maryland is one of 16 states, plus the District of Columbia, in the nation that has explicitly codified Roe v. Wade into its state law. The Maryland General Assembly passed legislation in 1991 protecting the right to abortion in the state. The legislation appeared on a ballot referendum in 1992, and Maryland voters approved it with 62 percent of the vote.

Reproductive rights advocates in Maryland have been bracing for the Supreme Court’s ruling on Dobbs v. Jackson Women’s Health Organization — the case the leaked opinion concerns — since the court agreed to hear the case in May of 2021, said Dr. Kyle Bukowski, chief medical officer at Planned Parenthood of Maryland.

The central focus of the Dobbs case is a Mississippi law that bans abortion after 15 weeks of pregnancy — a challenge to Roe’s provision that states cannot prohibit abortion care before viability, which occurs at about 24 weeks of pregnancy.

Bukowski said reproductive rights groups in the state have been preparing for a variety of decisions in the Dobbs case that could limit abortion rights. The decision could have taken a limited scope to only address the Mississippi law, but Bukowski said it looks like the court has instead chosen to “fully gut Roe.”

“Nothing that happened this week is surprising,” he said. “That being said, it’s still really painful to read it in print.”

The court made it clear over the last year it were hostile to abortion access, Bukowski said. That prompted lawmakers in the Maryland General Assembly to prepare to respond to abortion restrictions that could roll out across the country with the court’s decision.

Sponsored by Del. Ariana Kelly (D-Montgomery County), the Abortion Care Access Act will allow nurse practitioners, nurse midwives and physician assistants to provide abortion care in Maryland. Previously, only physicians in the state have been allowed to perform abortions — which advocates said left two-thirds of the state’s counties without a single abortion provider.

The bill would also create a training program to ensure there are enough health professionals to provide abortion care and allocate $3.5 million yearly in state funding for the program, beginning in the fiscal year 2024.

“We wanted to make sure that we could withstand whatever the Supreme Court chose to do. We wanted to be prepared for a worst-case scenario,” Kelly said. “Twenty-six states are going to ban or severely restrict abortion, and that’s going to put a tremendous amount of pressure on our provider network.”

Despite the General Assembly’s override of his veto of the Abortion Care Access Act, Republican Gov. Larry Hogan announced last week he would not provide the requested $3.5 million in funding for the program this year.

“There are serious concerns this program would set back standards for women’s health, and hastily rushing through this funding a year ahead of schedule would run counter to those concerns,” Hogan spokesperson Michael Ricci said in an email to The Washington Post.

Lawmakers knew Hogan may be hesitant to provide funding because of his initial veto, but “it’s a different world” with the Roe decision looming, Kelly said. If the ruling is overturned, 13 states have trigger laws that would restrict abortion immediately, and Kelly expects this widespread ban on abortion to affect Maryland providers.

“There is going to be no avoiding the pressure that is put on our clinicians here in Maryland,” Kelly said. “It makes me so angry that Governor Hogan is hiding behind the idea that this is not safe for women.”

House Speaker Adrienne Jones (D – Baltimore County) also introduced a constitutional amendment this session that would afford all Marylanders the right to “reproductive liberty,” which includes the right for every woman to make decisions about their pregnancies.

The amendment passed out of the House but was not considered in the Senate. Passing the amendment and getting it on voters’ ballots will be a top priority for lawmakers next session, Kelly said.

Overturning Roe could prompt an increase in support for the amendment, said Stella Rouse, a professor in this university’s government and politics department who has tracked the Abortion Care Access Act alongside students in her class this semester.

“[A constitutional amendment] will also, I think, provide opportunities for the legislature to allocate more funding for abortion care in the state,” Rouse said. “I really foresee the legislature really having the public behind them and trying to expand on what they did this session.”

Next session, the General Assembly will also work to respond to any pressures the state’s abortion care infrastructure could face after a formal Supreme Court decision is handed down.