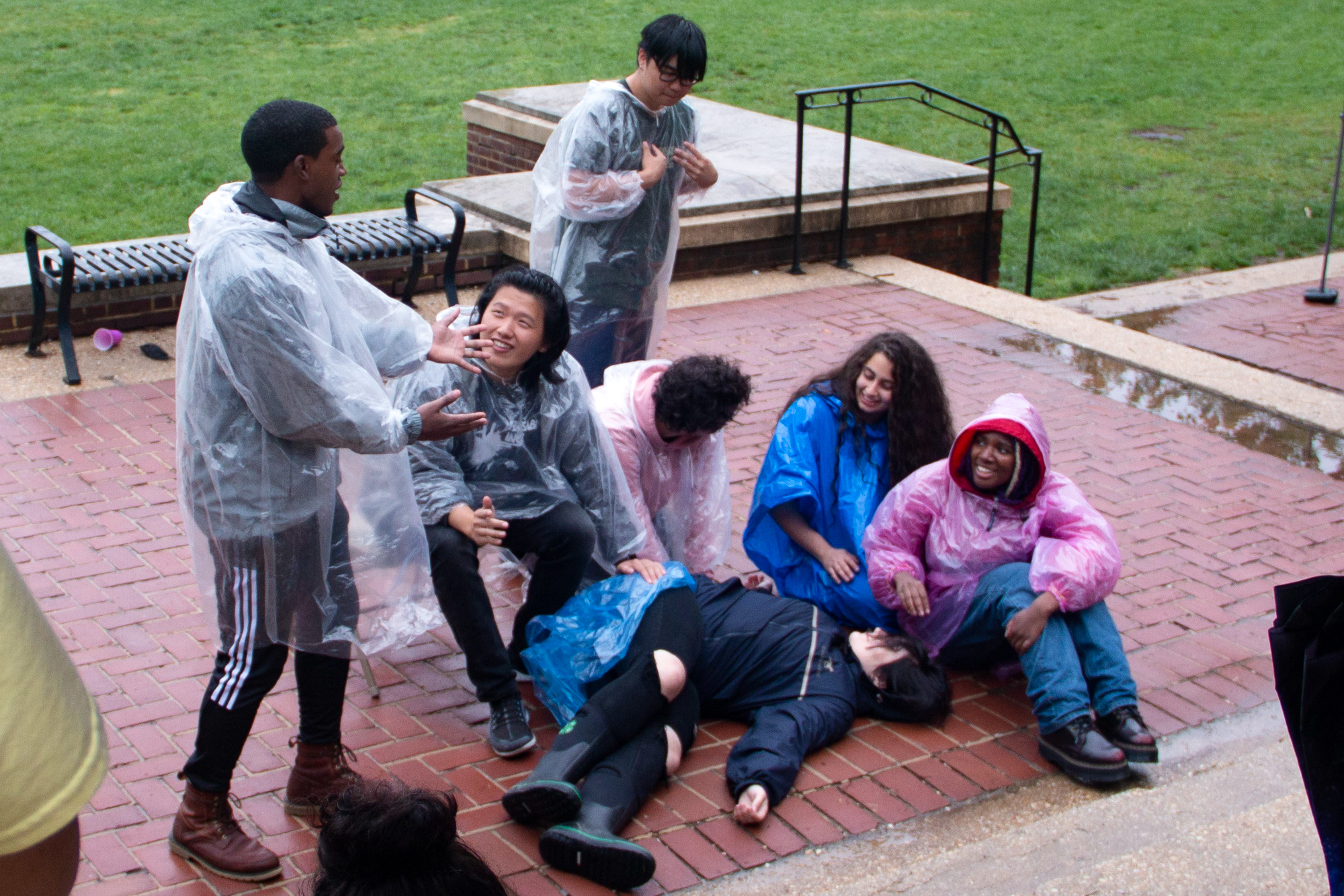 Erasable Inc.’s 24-hour show is performed in front of McKeldin Library on May 6, 2022. (Rylan Bassett/The Diamondback)

Braving the near constant rain Friday and Saturday, members of Erasable Inc. performed a 24-hour improvisational comedy show on the steps in front of McKeldin Library.

The show is held every spring semester on the Friday before Reading Day and raises money for a charity each year. This year, senior computer science major Josh Choi said the funds went to Terps Against Hunger.

Choi performed in the 24-hour show with his friends in Erasable Inc. He said the rain and fatigue were obstacles in the night. While there was an audience for most of the run, he said there was a challenging block performing to empty steps.

“There was a period for about three or four hours where there was no one,” Choi said. “And we were just at such a physical limit that we knew that  if we gave ourselves a break that we would just collapse.”

The group had a revolving crowd of students who stopped to enjoy the show. Sophomore computer science major Jonathan Camberos sat on his bicycle at the top of the steps to watch on his way home from work. He had heard about the group last semester but had never seen them perform.

That chaos in the early hours took the form of improv games that created opportunities for zany contrivances.

At one point, senior aerospace engineering major Rahul Jain pantomimed getting in the driver’s seat of a car, yelling to another, “If you shit in my car again — ”

Choi, in a game where he was the father of another performer, said, “I may be your father, but I’d wipe my ass with the cloth you’re cut from!”

During a game called Eulogy, five University of Maryland students mourned over a sixth, who was playing a recently deceased Bob from Bob’s Burgers — a character suggestion from the audience. Another student, playing the part of a priest, returned from a sojourn across the mall, so he wouldn’t hear the identity of the dead. He eulogized the mystery character in a game of macabre yet comical 21 questions.

That was about hour three.

[What I learned as an out-of-state student at UMD]

Choi described another hump between midnight and 5 a.m. when the show devolved from organized games, such as Eulogy, to the members talking about their lives.

“The rain was getting really bad, and that’s when it just turned into just flat out talking,” Choi said. “By about 7 or 8 a.m., we were back on our feet. We were performing. We were very tired. We were trying our best.”

He described a second wind in the final hour when “everyone just feels the life come back into them, and everyone’s so excited to perform and it’s amazing.”

Junior journalism major Max Bachmann praised the group’s resilience after watching for about an hour and a half. He came to watch a friend in the group.

The show ran from 1 p.m. Friday to 1 p.m. Saturday. Erasable Inc. performs much shorter sessions each Friday at 1 p.m. at the steps in front of McKeldin Library.