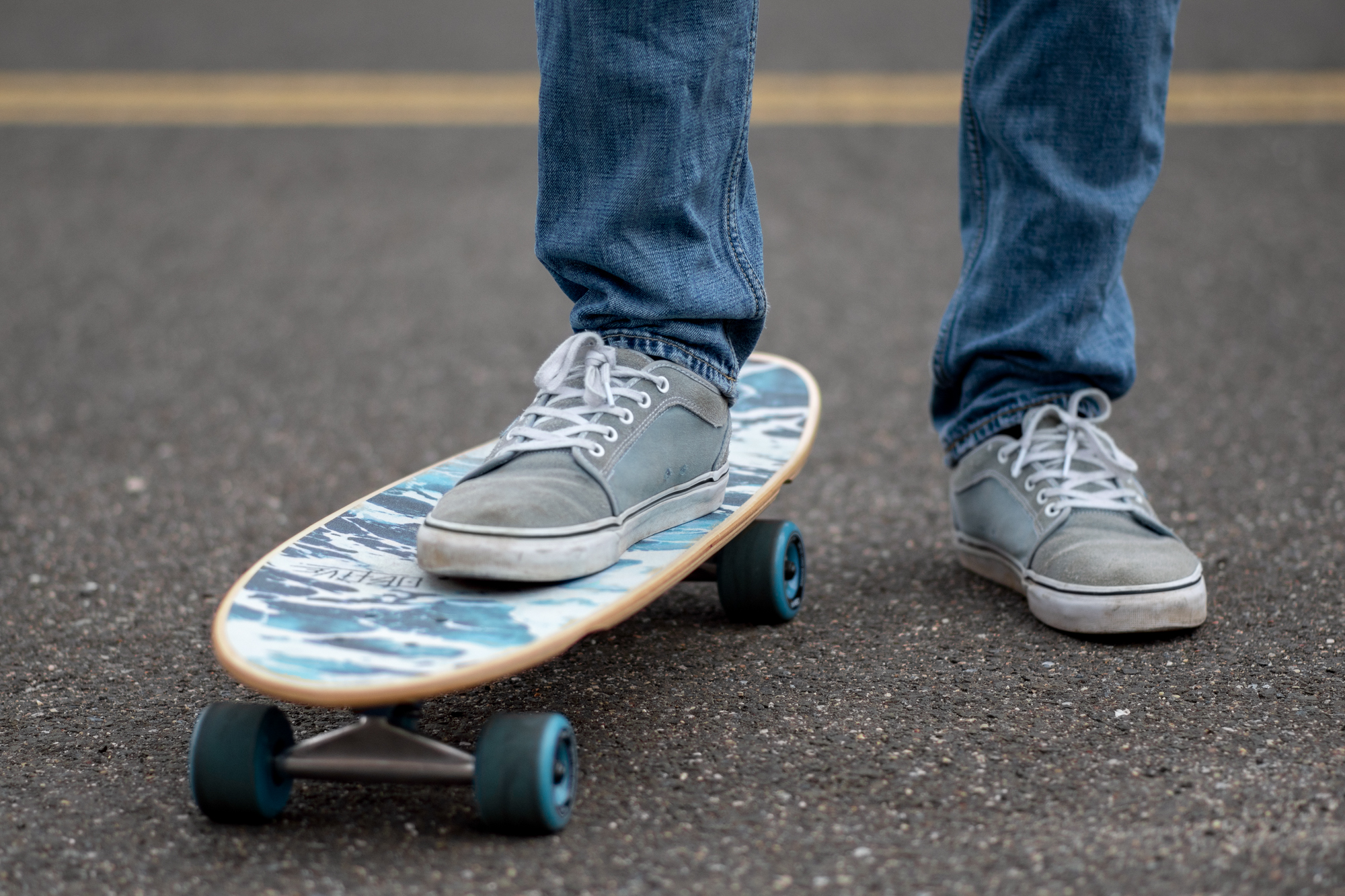 A student skateboards outside behind the School of Public Health building on April 3, 2022. (Autumn Hengen/The Diamondback)

Two skateboarding clubs at the University of Maryland aim to find a permanent space to meet and skate after multiple incidents with campus departments in the past month.

We Skate at UMD — a skateboarding club that aims to empower women, nonbinary, gender nonconforming and LGBTQ+ skaters — sent out a survey last month that received about 300 responses from students and community members who are interested in having a skate spot on campus.

Benanzea-Fontem has been messaging the Skatepark Project — a nonprofit organization established by professional skateboarder Tony Hawk — for help. He wants to have a space for skaters to hold events instead of walking 30 minutes to scavenge open parking lots.

However, he knows it’s a long-term goal.

“Campus is already pretty tightly packed,” Benanzea-Fontem said. “If you wanted to build something, you’d have to go through five or six other organizations.”

[Skateboard Basics: A guide to skating at UMD]

Benanzea-Fontem said his club would host events in the Memorial Chapel parking lot when it was empty, but it wouldn’t be long before someone asked them to leave.

We Skate has also had some run-ins with Facilities Management and the University of Maryland Police, We Skate Interim President Emma Yockman said.

“Skateboarding is controversial, in a sense, to some people who see it as vandalism or harassment,” Yockman, a junior biology major, said.

Yockman said she wanted to reserve spaces such as the Leonardtown basketball courts, and sent emails to RecWell but didn’t get an initial response. When the group went to skate there, Yockman said Facilities Management temporarily confiscated their equipment. They later found it behind the public health school building.

When she emailed DOTS about reserving parking lots for a skating event, she said they told her the skateboarding clubs can’t reserve spaces that are used for parking only. However, Yockman said that response frustrated her because people can reserve parking spots for tailgating, which is also just people hanging out in a parking lot.
“It just sort of rubbed me the wrong way that they weren’t even willing to talk about it,” Yockman said.

We Skate has received donations and advice about finding a space to skate from Rev. Nathan Hill of University Christian Church in Hyattsville. Over the years, Hill — who has been a skateboarder since the late 1980s — has connected with some of the university’s skaters through local skate spots and Instagram.

Hill said the church gave him a little bit of extra funding to spend how he wanted, so he used it to donate to We Skate, so they could purchase skateboarding equipment. Hill said he wants to support the campus skating community and make sure the students know they’re not alone.

“It’s the golden age of skateboarding,” Hill said. “People of all ages, picking it up at all levels, some doing really hard things, some just enjoying the vibe of skating on a sidewalk. It’s such a great time to be a skater.”
The two skateboarding clubs and Hill were able to meet with RecWell Director Jay Gilchrist to discuss possible solutions to the skateboarders’ lack of skating space on campus.

Gilchrist wrote in an email that for RecWell-controlled spaces, the campus tries to keep space reservations “appropriate” to the space so as to prevent damage, injury or disruption to academics. Skateboarding needs a smooth surface, such as parking lots, which pedestrians and cars use.

“As I told them, it was eye-opening for me to see that there is such a large and diverse community of skateboarders on campus that RecWell is not serving,” Gilchrist wrote.