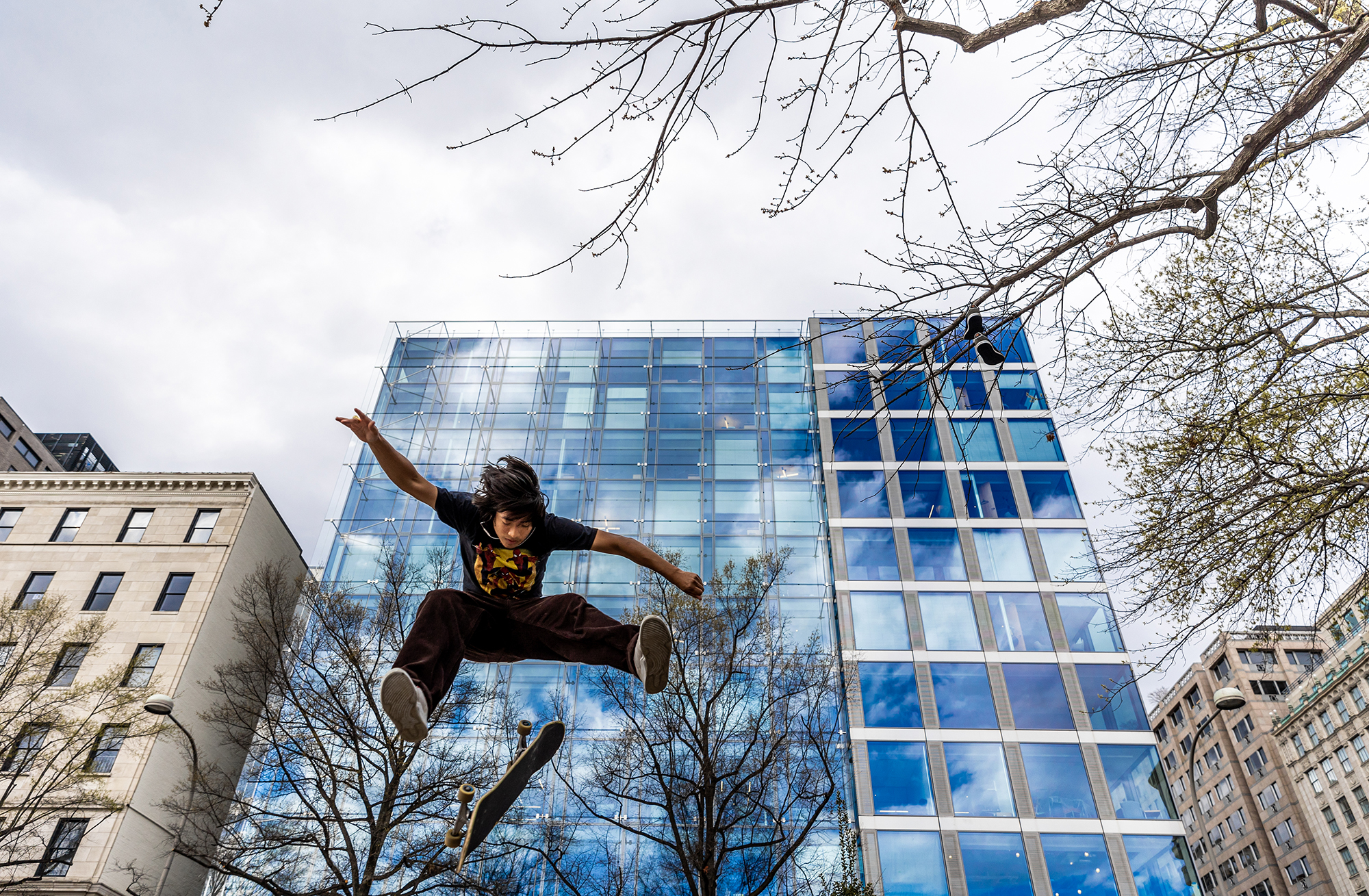 A skater flies through the air at Freedom Plaza on April 8, 2022. (Julia Nikhinson/The Diamondback)

For skateboarder Arthur Lisi, Freedom Plaza has long been a space that fostered a love for the sport. At age 13, Lisi went for the first time in 1989, and remembers watching in awe as Washington, D.C., skaters did things nobody thought were possible.

“The spot itself … it’s like it was made for skateboarding,” said Lisi, now 47 years old. “The innovation of skateboarding that was going down there at the time, was the most progressive you would ever see.”

Thousands of skateboarders have flocked to Freedom Plaza since 1980. Washington, D.C., skaters have called the plaza home for decades and, in the process, coexisted with civil rights protestors, event organizers and dancers.

Now, the thousands who consider the plaza the “skateboarding mecca” of the world are fighting to preserve it. More than ten thousand people — including some students at the University of Maryland — have signed a petition opposing plans to eliminate it.

“It’s really endearing that people are coming together, differences aside to … say that this is not okay,” said Atem Benanzea-Fontem, a junior computer science major and the president of the University of Maryland Skateboarding Club.

A proposal to eliminate the space

In February, the National Capital Planning Commission — the federal government’s planning agency for the National Capital Region — announced three proposals for the Pennsylvania Avenue Initiative, which seeks to revitalize the street linking the White House and Capitol. And Freedom Plaza — located off the northwest part of the avenue — could bear part of the renovation’s burden.

Each proposal on the initiative’s website would either reroute Pennsylvania Avenue’s traffic through the plaza or make the plaza into a green space. So far, plans are not finalized, according to the commission’s director of physical planning Elizabeth Miller.

“What we’re trying to do is make the space more inclusive than it is,” Miller said. “We need to expand and make that space more usable, more comfortable and actually more flexible.”


The NCPC will hold three public meetings where people can ask questions and voice their opinions on each proposal in April and May. The commission will also consider responses they receive during a 120-day public comment period, which runs through July 13, before crafting a final proposal for the avenue.

Miller said that there is no guarantee that the plaza will be affected in a way that prohibits activities like skateboarding, even if it is changed as part of the initiative.

The finalized version of the plan will likely be “a mix and match” of ideas gathered now, Schierhold added.

A threat to a “magical place.”

Brian Aguilar, who owns Crushed Skate Shop in Washington, D.C., and started the petition to preserve the plaza, said he “instantly felt threatened” by three proposals.

Aguilar grew up listening to his brother tell stories about Freedom Plaza long before he landed his first trick there. The plaza provides a “home base” for the skateboarding community and Crushed, which is the last skate shop remaining in the District.

“People come from all over the world just to skate the marble,” Aguilar said. “It’s a magical place.”

A quick transfer to the Orange or Blue Metro lines at L’Enfant Plaza gives University of Maryland community members a straight shot to Freedom Plaza — which is just 10 miles away from the campus and located closest to the Federal Center SW Metro stop. And members of the University of Maryland Skateboarding Club utilize the space often, Benanzea-Fontem said.

Skaters at this university have also collaborated with other students to host events at the plaza – including a “Game of Skate” competition between this university and Georgetown University skaters that will take place on April 9.

“If you’re planning to skate the entire day, people usually meet up there because that’s the most open space you can access in downtown D.C.,” he said.

Cherished memories, and a formative space for professionals

Many skaters have made their most cherished memories in Washington, D.C., at Freedom Plaza. Nnamdi Ihekwoaba remembers a decade of warm summers spent watching the sunset reflect off the plaza’s marble

Freedom Plaza provides a home for everyone, Ihekwoaba said. Many who occupy the space may have never visited Washington, D.C., if it weren’t for the plaza’s significance, he added.

Ihekwoaba has lived through protests and dances during his years skating at the plaza. He remembers elderly people who would descend to the marble on Wednesday nights in the summertime to dance.

“It’s all because there’s a space that was created for that kind of thing,” Ihekwoaba said. “If historical things that are meant to represent the people, and are for the people … are being destroyed, it really is taking away a lot of value and a lot of morality out of the city.”

When Maen Hammad moved to Washington, D.C., in 2015, one of the first things he did was skate at Freedom Plaza. He was raised just outside of Detroit and watched professional skaters dance across the marble at Freedom Plaza from hundreds of miles away.

Professional skaters who rose to prominence in the ’80s and ’90s, including Sean Sheffey, Brian Tucci and Mike Kepper, used the space as a proving grounds early in their careers.

During his time skating at the plaza, Hammad has realized how important it is for the DMV skateboarding community to have a central hub. Public spaces don’t often overlap with professional sports, but the physical space where someone skates is a crucial part of the activity, Hammad said.

“The relationship to Freedom Plaza with the skaters in particular probably has a little less to do with skating than it actually does with this idea of community,” Hammad said. “This is really a very vital and nourishing space for the exact community who lives in D.C.”

Some have also wondered about the fate of Dr. Martin Luther King Jr.’s legacy if Freedom Plaza is destroyed. The plaza is named in honor of King — who wrote part of his “I Have a Dream” speech nearby and whose time capsule is supposed to remain buried beneath the plaza until 2088.

Benanzea-Fontem believes a plan that destroys Freedom Plaza would serve as a metaphor for “destroying freedom” itself because of King’s impact on the space.

“Martin Luther King was such a huge pivotal part of our country, and he’s a huge part of Freedom Plaza, and to just simply think about destroying it, to maybe add some grass, or something far less significant, is kind of a slap in the face to a lot of people,” Ihekwoaba said. “It’s a lot deeper than just skateboarding.”

The plaza is also a focal point for a long history of First Amendment demonstrations in the nation’s capital. Eliminating the plaza would stifle a number of important gatherings in Washington, D.C., Ihekwoaba said. From Occupy Wall Street demonstrations in 2011 to pro-Trump “Stop the Steal” protests last year, the plaza is a “landmark and host” for civic discourse.

Miller said once they have realized a plan for the avenue, the NCPC will undergo environmental and historical resource analysis, with public meetings during that process. Making the space more usable to all communities in the District promotes diversity and inclusion, she added.

Black and brown people nurture Freedom Plaza the most, Hammad said. That, paired with King’s legacy at the plaza and the NCPC’s sudden announcement of the space’s possible destruction, signaled to him that some people refuse to see how communities engage with the plaza.

“I would encourage any sort of policymaker or city planner involved to go on their own on a weekend and hang out at Freedom Plaza by themselves for like an hour and just see the number of people, the types of people, the variety of conversations, the smiles, the cheers, the kids, the elderly, who are all really having a quite beautiful interpretive dance with an already existing public space,” Hammad said.

In addition to sharing the petition on social media, many skaters have reached out to the commission via email to raise their concerns. Others plan to attend one or more of the public meetings on the initiative.

Longtime members of the skateboarding community like Ihekwoaba are not surprised by the outcry of public support. Freedom Plaza has touched different communities over the last four decades. Now, the communities who use the space are protecting it in its moment of need, Ihekwoaba said. “This is our time to actually stand up and fight for something that we do care about,” Ihekwoaba said. “We can all agree on one thing: this place is extremely important to everybody.”