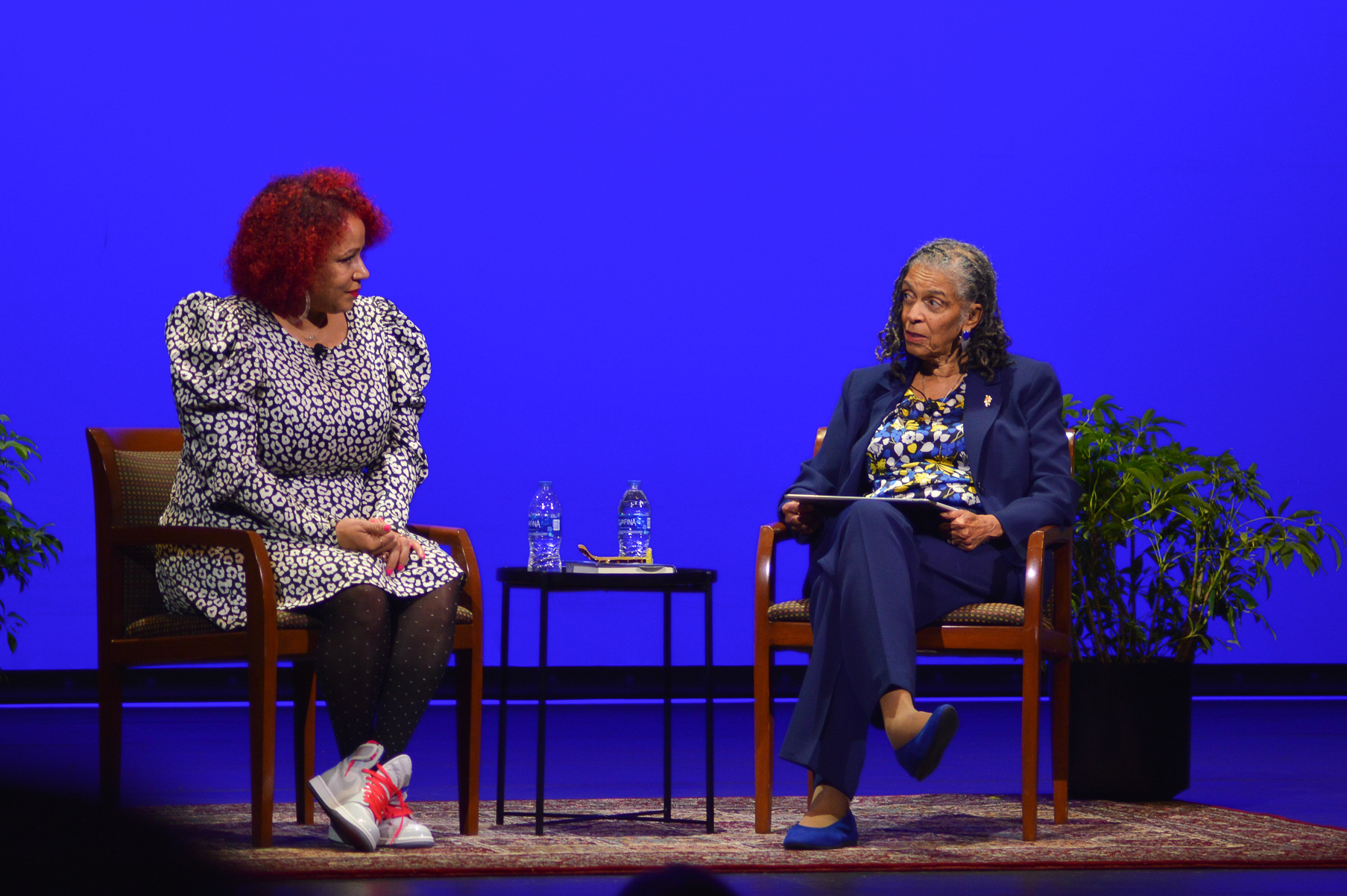 Nikole Hannah-Jones, author and developer of 'The 1619 Project,' speaks with Bonnie Thornton Dill, Dean of the arts and humanities college, during the Arts & Humanities Dean's Lecture Series on May 3, 2022. (Giuseppe LoPiccolo/The Diamondback)

The University of Maryland arts and humanities college hosted a lecture Tuesday where journalist Nikole Hannah-Jones discussed her book The 1619 Project, based on her series of the same name published in the New York Times.

Bonnie Thornton Dill, dean of the arts and humanities college, interviewed Hannah-Jones at the Kay Theatre in the Clarice Smith Performing Arts Center.

Hannah-Jones clarified some misconceptions about the project and how the American public views history in general.

She said our understanding of history is a reflection of power, not reality.

Hannah-Jones said American history is based on exceptionalism, which is a perspective that only serves to boost a sense of nationalism.

“What The 1619 Project is doing is saying that we can mark any number of people with an origin. Of course, origin stories are kind of by definition, human mythology,” Hannah-Jones said. “They are a way of defining who we believe that we are as a people, as a country, as a community, as a family.”

She said The 1619 Project was meant to share the gaps in American history that schools often don’t teach — namely, the contributions of Black people.

Sharing that missing history closed said gaps in knowledge for both readers and herself, Hannah-Jones said.

The author said the project wasn’t meant to be a history as her critics have claimed.

She said she was startled by the reactions from state legislators who move to pass laws banning schools from including The 1619 Project in their curriculums, she said.

Hannah-Jones said she was also surprised the project was mentioned by name during the confirmation hearings of Judge Ketanji Brown Jackson to the U.S. Supreme Court and former President Donald Trump’s impeachment hearings.

The journalist said the actions of congressmen — such as Sen. Tom Cotton and Sen. Mitch McConnell introducing legislation to strip federal funding from schools that teach The 1619 Project — speaks to its influence.

“When you think about that, that this is a single work of journalism, and what they say is that this project could destroy the very foundation of America. That’s amazing,” Hannah-Jones said.

To deal with the demands of her book tour, Hannah-Jones said she drew inspiration from the struggles her grandmother and father went through to provide a better life for their family. When she considers their determination, her own work feels easier.

“I get to read and I get to think and I get to write things that I hope will move people to build a better country for all of our fellow citizens and non-citizens,” Hannah-Jones said. “And I can’t imagine a better life.”