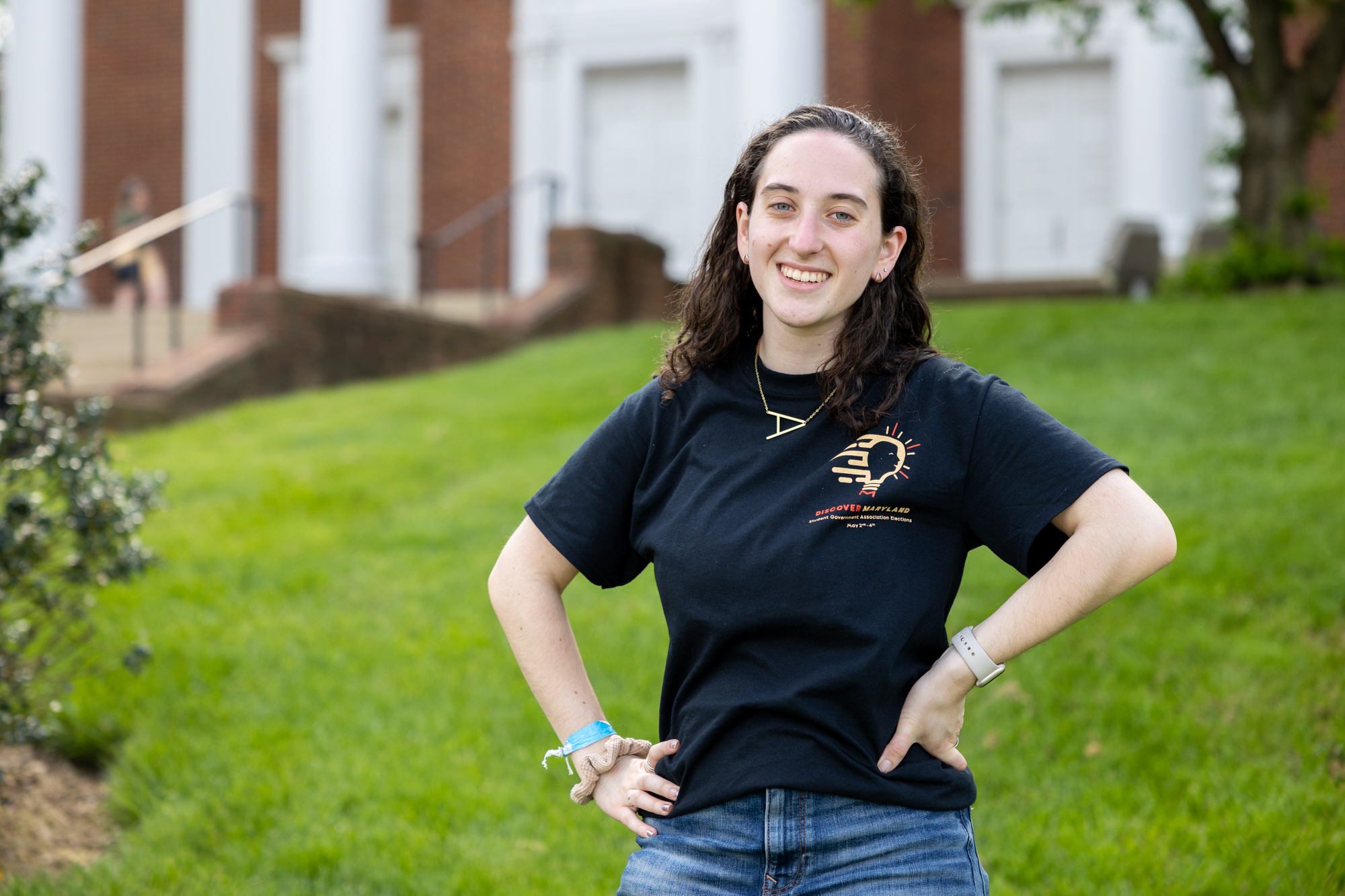 Ayelette Halbfinger, a junior finance and operations management and business major, and Discover Maryland's candidate for SGA president on May 2, 2022. (Cam Andrews/The Diamondback)

Kahn, a University of Maryland alum, grew up in the same community as Halbfinger, but it wasn’t until they worked together on the board for Terps for Israel that Kahn became close with Halbfinger. The two also worked together in the Student Government Association.

Kahn said it did not surprise her at all that Halbfinger decided to run for student body president. Halbfinger always finds a way to do something when she puts her mind to it, she said.

“I’ve never seen somebody get so much done in so little time, all by herself,” Kahn said.

Halbfinger, a junior finance and operations management and business analytics major, said her decision to run for SGA president did not hinge on any one reason.

“It was a natural progression of passion and enthusiasm for creating positive change on campus,” she said.

Halbfinger said one of the main priorities of her party — Discover Maryland — is creating a student scholarship and Piscataway memorial for the Native American community, particularly because of this university’s status as a land grant institution.

The candidate also wants to advocate for excused absences and work extensions for religious and cultural holidays.

Among other goals, Halbfinger aims to expand the office of the president and bring in representatives from Greek life councils and Living and Learning programs on campus so they can have a “direct line of communication” with the SGA executive team.

Halbfinger spent her freshman year getting involved in the Jewish community, the business school and her honors program — Design Cultures & Creativity. During her sophomore year, she was appointed the business school’s representative in the SGA and served on multiple committees.

She also spent time working for Kosher and allergen-free options in the dining halls, eventually becoming the dining services liaison for the SGA. She said she would continue to work for food inclusion and accessibility on the campus if elected.

As someone with hearing loss, Halbfinger is also passionate about improving accessibility on the campus. She wants to continue conversations on adding a mental health fee and implementing mental health absences.

Halbfinger said Discover Maryland wants to be transparent in what it is doing for students if elected and plans to share a timeline on the website of when specific conversations will be held with administrators. She hopes with the timeline, students will be able to hold the SGA accountable by continually asking questions.

“If students feel as though they have the information to ask those questions, then every member of SGA is held responsible for having the answers to those questions, and keeping us on track,” she said.

Hayden Renaghan, a sophomore philosophy, politics and economics and Spanish major, worked with Halbfinger as the co-chief of staff for the SGA this past year. Renaghan immediately recognized Halbfinger’s passion.