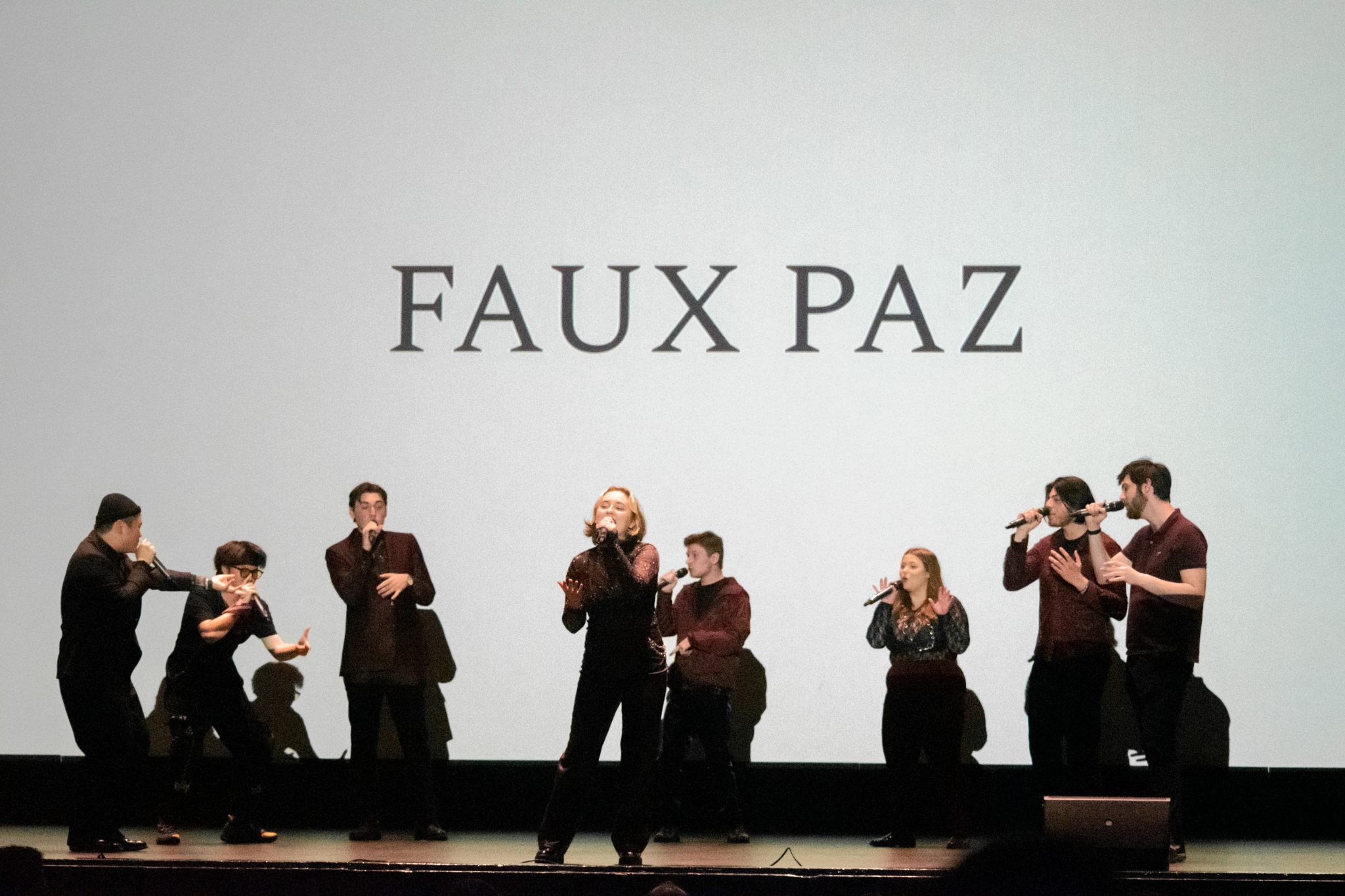 By Kirstin Nichols
For The Diamondback

In their second-to-last performance of the school year, Faux Paz opened and closed the show with new takes on hit songs by artists such as ABBA, Harry Styles, Ariana Grande and Jojo.

In between Faux Paz’s sets were performances from University of Maryland, Baltimore County’s Mama’s Boys and University of Delaware’s Vocal Point.

Junior neuroscience major Dylan Nguyen is president of Faux Paz and worked as an emcee during Friday’s performance.

At the beginning of the show, he mentioned how the group had beat about 350 schools to win the 2021 International Championship of Collegiate A Cappella, the competition featured in the Pitch Perfect movies, with a four-minute video covering Sam Smith’s “How Do You Sleep.” The competition was virtual due to COVID-19 precautions.

“We put all of our efforts into the virtual songs,” said Nguyen.

The group just traveled to New York at the end of April, and are currently preparing for their final performance of the year at Art Attack on Saturday, where they will be “pseudo opening” for Flo Milli and Polo G.

This concert wasn’t a possibility last year due to the ongoing COVID-19 pandemic.

[UMD music majors discuss their futures shaped by the pandemic]

“Everything was online. It was crazy and sad, but we made it work, and now we’re back,” Sarah Gray, a senior biology major and Faux Paz member, said.

Faux Paz member Ethan Limansky was the first soloist of the night, opening with “Adore You,” by Harry Styles, arranged by Gray and Nguyen.

The duo also arranged the composition for the next performance, BTS’ “Butter,” with soloist Sammie Johnson.

“There’s eight of us graduating this year,” Hart said. “It’s more than half of our group leaving so it’s very sentimental, stressful, sad, happy — it’s a whole mix of things.”

Hart, a senior visual arts major, said they got in contact with Faux Paz at another a cappella concert. The group invited the Mama’s Boys to the spring show.

“It’s a lot of our last years here, so we’re doing as many gigs as possible,” said Rivers, a senior psychology major who has been performing with the Mama’s Boys since his freshman year. “So we had to get this one.”

Vocal Point was followed by a solo act from Linyi Wei, Faux Paz’s new beatboxer, in a performance that had the audience cheering throughout.

Afterward, “Sincere” from The Music Man was performed by only the Faux Paz boys with soloist Nguyen, followed by Noah Cyrus’ “July,” which was made into a guitar-aided duet between Gray and Johnson.

Faux Paz members united again to perform Nguyen’s arrangement of “Don’t Talk Me Down” by Jojo with soloist Johnson.

The finale was Gray and Nguyen’s arrangement of “Dancing Queen” by ABBA with soloist Gray.

Nguyen said this was one of two annual open-admission Faux Paz performances at this university; there is also a fall show.

“It’s just to showcase everything that we’ve been doing because we always put in a lot of hard work and we do a lot of gigs outside UMD, so a lot of times we just want to get back to the UMD community,” said Nguyen.

This was the last annual spring show for Gray, who worked to arrange many Faux Paz pieces.

“This is my last big show with the group because I’m graduating, so yeah, very bittersweet but it went really well so I’m super happy about it,” Gray said.

Gray worked with Nguyen to compose many arrangements on voice memos and then teach them to the group during twice-a-week rehearsals.

“This is my second family, and college would not have been the same without it,” Gray said. “I would highly recommend doing this to anyone who enjoys music, dancing, whatever. You’ll make lifelong friends.”