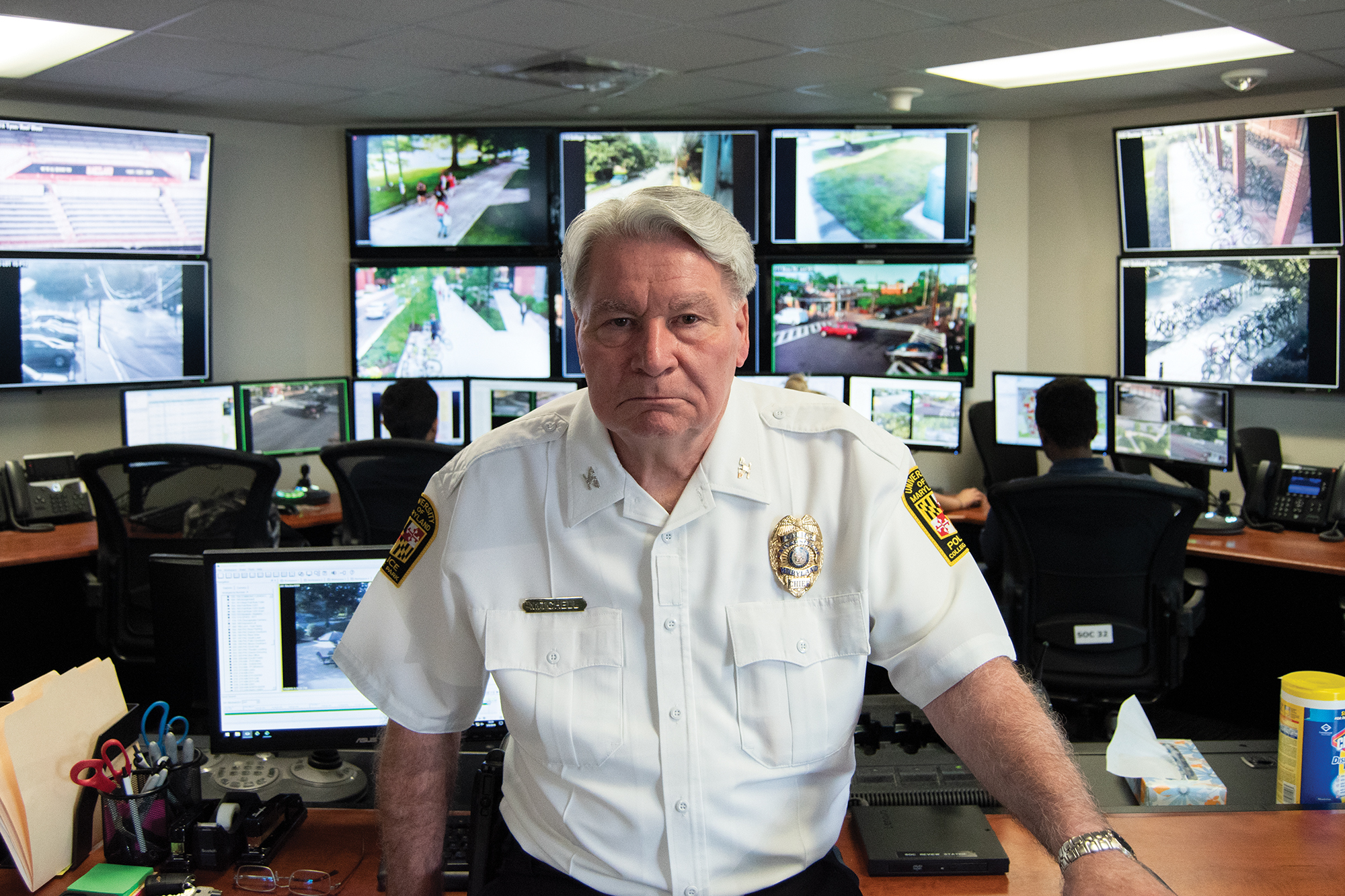 Police Chief David Mitchell stands in front of television screens broadcasting security camera footage from all across the campus on May 9, 2019. (Joe Ryan/The Diamondback)

The City of College Park could reintroduce funding for city surveillance cameras monitored by University of Maryland Police after police chief David Mitchell raised concerns that the city is less safe without the monitoring.

Employees in the police department’s Security Operations Center are responsible for monitoring the cameras on this university’s campus. In spring 2020, the College Park City Council decided to cut funding for off-campus cameras. The change took effect on July 1, 2021.

Mitchell, who has expressed that he believes off-campus surveillance is crucial for safety, visited the council during an April 5 meeting and argued in favor of monitoring off-campus cameras. The 22 cameras are already set up and are currently collecting footage to be stored, but they are not monitored in real time.

The cameras have been useful in preventing crime, as those who monitor the cameras were able to call for police to intervene in active situations, he said.

“We’ve had so many successes with live monitoring of city cameras along with the cameras that are on the campus,” Mitchell said at the meeting.

In a proposed budget for the 2023 fiscal year that begins July 14, the city includes a $145,000 payment that will cover the cost of the 22 cameras. The money allocated to this expense comes from College Park’s $22 million COVID-19 pandemic relief fund provided by the federal government under the American Rescue Plan Act.

“We all want to make sure that College Park is a safe spot,” District 3 council member Stuart Adams said. “I think it really is a safe place to live, and we want to maintain that.”

Adams added he supported the decision to pay for the use of cameras next year because the city had already made the “big investment” to install the technology.

Some council members expressed concerns that University of Maryland Police had not relayed enough data back to them to justify the cost of the live monitoring.

District 1 council member Kate Kennedy said she’s not sure if the city should continue to fund the cameras once they don’t have the financial cushion provided by pandemic relief money.

“Right now it’s fine,” Kennedy said. “I just am not convinced that this monitoring is the best use of money.”

Maria Mackie, a District 4 council member, said she has always supported the use of surveillance cameras, and agrees with giving the police department financial support to use the cameras as a “tool” to keep the city more secure.

“I think it’ll be a really good year to gather data,” Mackie said. “This seems very affordable to me and worth trying for this next year and evaluating it.”