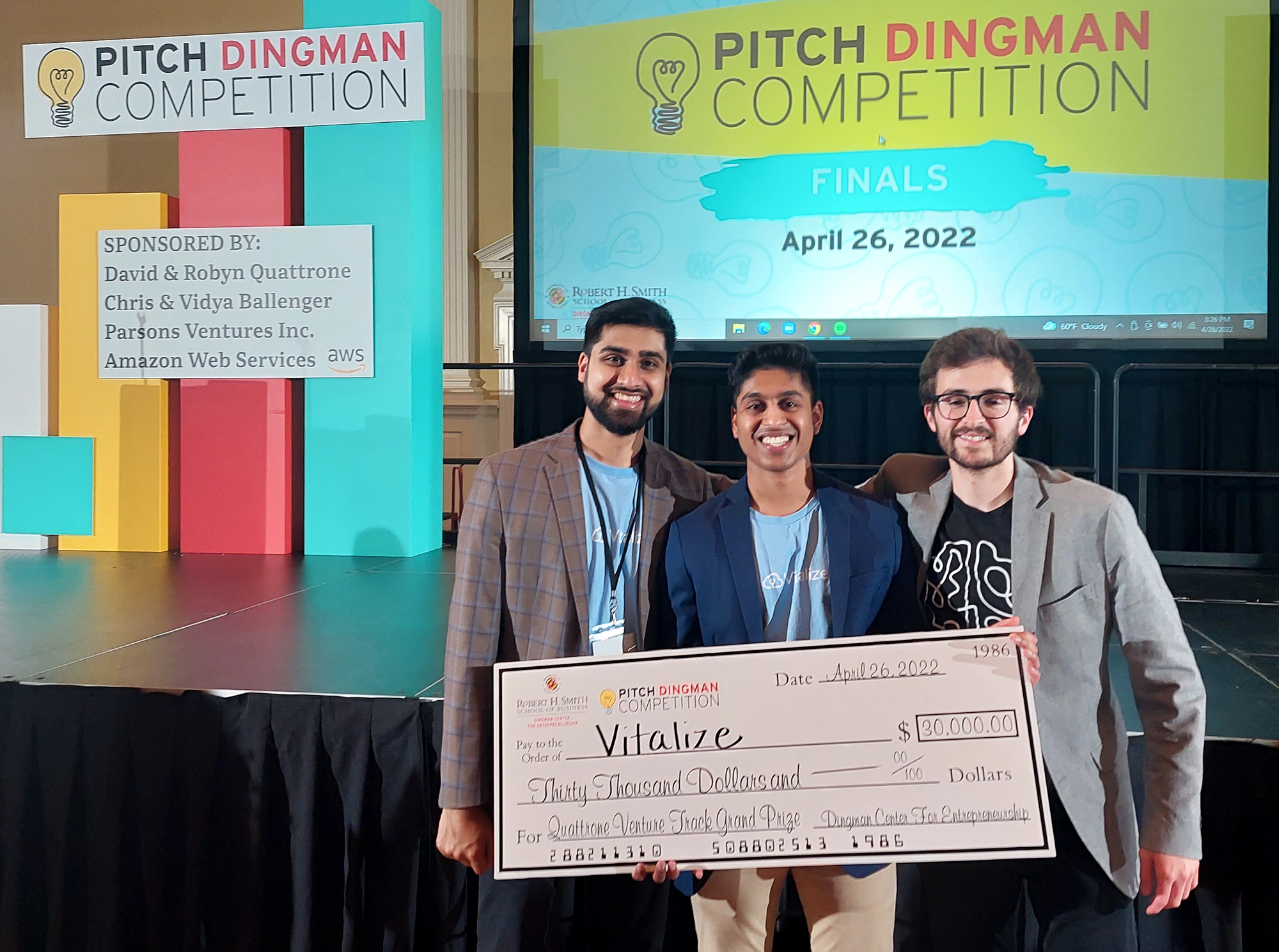 The 2022 finals for the Pitch Dingman Competition took place Tuesday evening at the Stamp Student Union Grand Ballroom after two years of being hosted virtually. The annual business competition is organized by the Dingman Center for Entrepreneurship at the University of Maryland and features innovative projects created by teams of students at this university.

Each team had six minutes to impress the audience with a pitch and four minutes to respond to questions from the panel of judges for a chance to win their share of more than $75,000 in seed funding.

The prize money was awarded in two main segments — the David and Robyn Quattrone Venture Track, targeted at students with viable tech-enabled ventures, and the Main Street Track, a category for students with a small non-tech business with a minimum proven revenue of $1,000.

[Do Good Challenge awards more than $20,000 to student innovators]


The first place prize of $30,000 in the Quattrone Track went to Vitalize, a wellness app designed to reduce burnout in clinicians and health workers developed by junior Sanketh Andhavarapu and University of Maryland alum Veeraj Shah. The venture had also won first place at the Do Good Challenge, a different venture competition at this university.

“Burned out health workers are three times more likely to make medical errors and so by reducing burnout, we can reduce medical errors, make better decisions in health care and improve the quality of patient care,” Andhavarapu, an individual studies and physiology and neurobiology major, said. “This is unprecedented for our team, I think we’ve gotten a lot better at putting our story together … conveying that and showing the importance of what we’re building.”

Omega 3 LLC, a nutritional food company started by senior Edwin Djampa, won the grand prize of $20,000 in the Main Street Track. His company sells snacks such as granola bars packed with Omega 3 nutrients from a blend of chia, flaxseed, walnuts, almonds, oats and honey.

Djampa, a senior nutrition and food science major, started Omega 3 LLC during his freshman year after realizing how much Omega-3 improves brain health.

“People were mainly getting Omega-3 through supplements, and I really wanted to change that and make it so accessible,” Djampa said.

Djampa plans on using the funds to upgrade infrastructure at their factory in Hagerstown, Maryland and increase production from 200 to 2,000 bars a day to more than 3,000 bars a day.

The second place $7,500 prize in the Main Street Track went to MatMate, a novel, patent pending protective device that stops the driver’s heel from wearing through their car’s floor mat.

James Dawson, a sophmore management major, developed the device after noticing heel-wear spots while working as a professional detailer for almost five years. He also won the Audience Choice Award of $1,000.

“I plan to use this primarily for reinvesting in larger injection moulds as well as product inventory,” Dawson said. “This will help me solve my inventory bottlenecks that I’m currently having, just because at small levels, my inventory is really expensive.”

Chat Health, a digital health assistant for university students came in second place in the Quattrone Venture Track and received $10,000 in funding.

Senior Aishwarya Tare started Chat Health after experiencing awful health problems during her freshman year. While working on a class project building wellness resources for freshmen and dining halls, she joined forces with two other students who had just won the Gold Award in the public health school for building a chatbot.

Even though she already had an intimate understanding of the business, Tare said pitching in front of so many people at the Dingman competition drastically improved her pitch and understanding of her own product.

“I think everybody, even in this entire audience, even the judges, could have reflected on a time in college when something about their health was off,” Tare said. “University students, especially freshmen, are really not healthy because they’re having to independently manage their health for the very first time, they don’t have their parents to take them to doctor’s appointments anymore.”

North Star Creations — a company started by business administration graduate student Mat Parsons and his wife Elaine that creates products for parents to teach their children how to recognize and understand emotions — came in third place, receiving $1,000.

One of the judges and event sponsors, co-founder and CTO of Cvent David Quattrone said while choosing the winners was a difficult decision because of close competition, he’d advise the students to continue working on a proof of concept.

“Making sure that you’ve got a viable business model in a pathway towards profitability so that you’re not always looking at or requiring additional incoming funding,” Quattrone said. “So as soon as you can get to a good critical path of self sustaining, the better off you are and a stronger position you are in.”