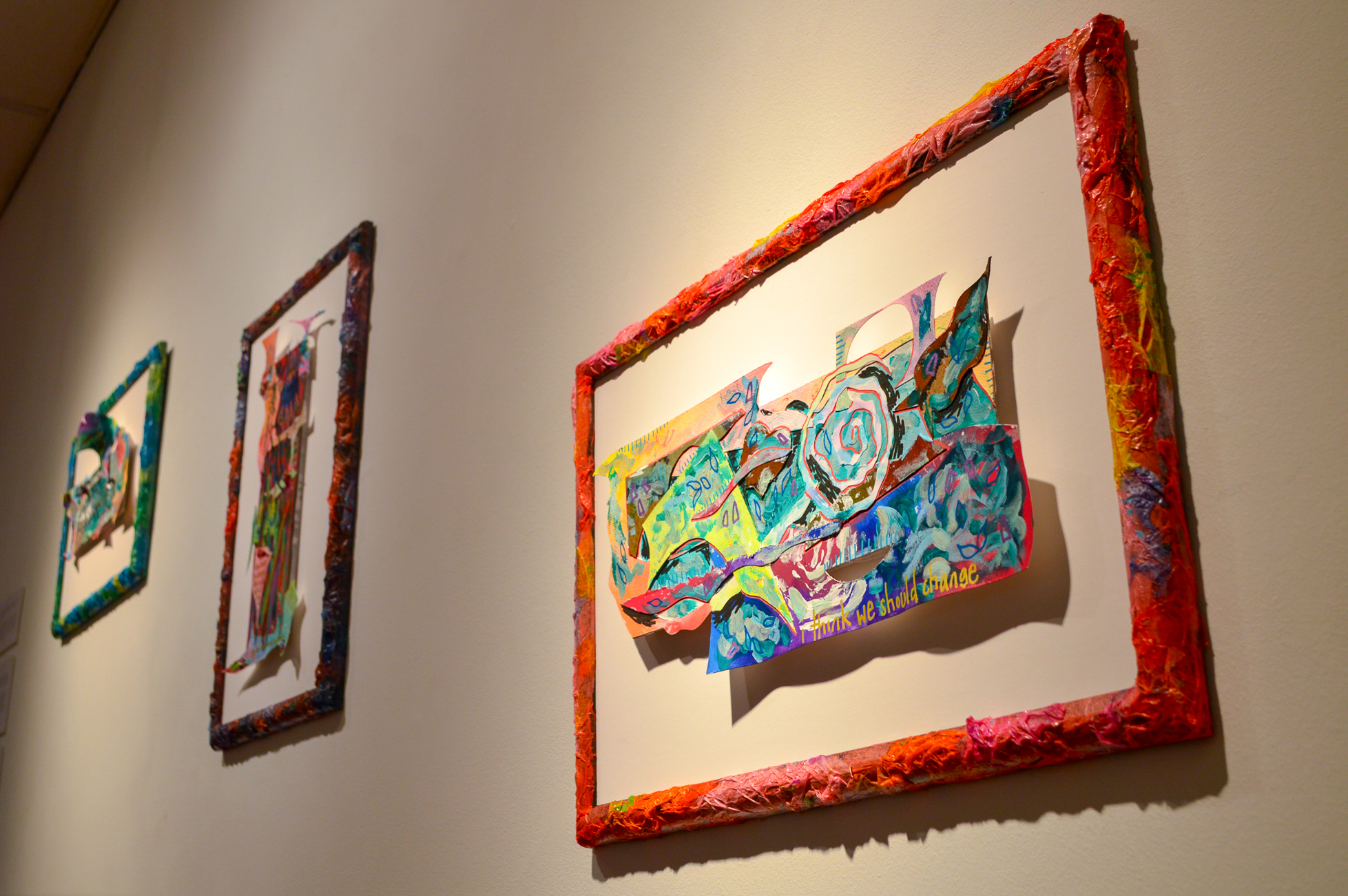 Artist Camila Tapia-Guilliams’ piece “I Think We Should Change” on display at the “Alternate Universe: Visualizing Queer Futurisms” exhibition in the Stamp Gallery. (Giuseppe LoPiccolo/The Diamondback)

This month, the University of Maryland’s Stamp Gallery concluded its latest art exhibition after it spent almost two months on display.

The art exhibit, “alternate universe: visualizing queer futurisms,” was a student curated exhibition that featured various artworks from two artists whose focus is on the world through a LGBTQ+ person of color’s perspective.

Marjorie Antonio, a senior American studies and history major, was offered the chance to curate this exhibition.

“I found that was a potential way that I can bridge my interest in art history and visual culture, material culture, with museum work,” Antonio said. “A field that I would like to go into post grad.”

Antonio said she wanted to have a dual artist show that could tell two different perspectives on queer futurity which prompted her to bring in Dr. micha cárdenas and Camila Tapia-Guilliams.

One of the pieces displayed was a virtual reality game called “Sin Sol/No Sun” by cárdenas. The game follows a transgender Latinx AI named Aura and how she views the world after climate change has devastated Earth, according to the Stamp Gallery blog.

Antonio said Tapia-Guilliams’ work juxtaposed cárdenas’ as their work consists of writing poetry and other collaborative work. Yet, both artists speak on queer futurity and how the world is seen through the community.

“I wanted to elucidate that and bring these very large theoretical concepts to campus in a way that students are able to engage with it,” Antonio said.

Tapia-Guilliams, an alum of this university, said they were considering displaying their work at another exhibition, however, it did not align with their goals.

One of these goals was accessibility to the artwork.

“A lot of art galleries don’t actually like to have big statements on the wall and like to be a little bit veiled in terms of the meaning of work,” Tapia-Guilliams said.

Tapia-Guilliams said Antonio did a great job with them and cárdenas to display the meanings behind their artwork. Tapia-Guilliams wrote notes on the side of their pieces and shared their thoughts for the audience to see.

“It’s definitely been our best attended exhibition since the start of the pandemic,” Stamp Gallery manager Tara Youngborg said. According to Youngborg, 843 people had visited the exhibition throughout the two months of its showing.

Youngborg said Antonio did an incredible job curating the exhibition and was happy the gallery got to work with Antonio and the other artists.

Now that the exhibit has come to an end, Antonio felt the exhibit offered a different look into art and shows how she approaches all her work through “the lens of art activism.”

“I wanted to treat this exhibition as a close out, like what is the legacy I’m going to leave for the University of Maryland,” Antonio said. “I knew that this exhibition was something that had a lot of impact in guiding different campus community members.”