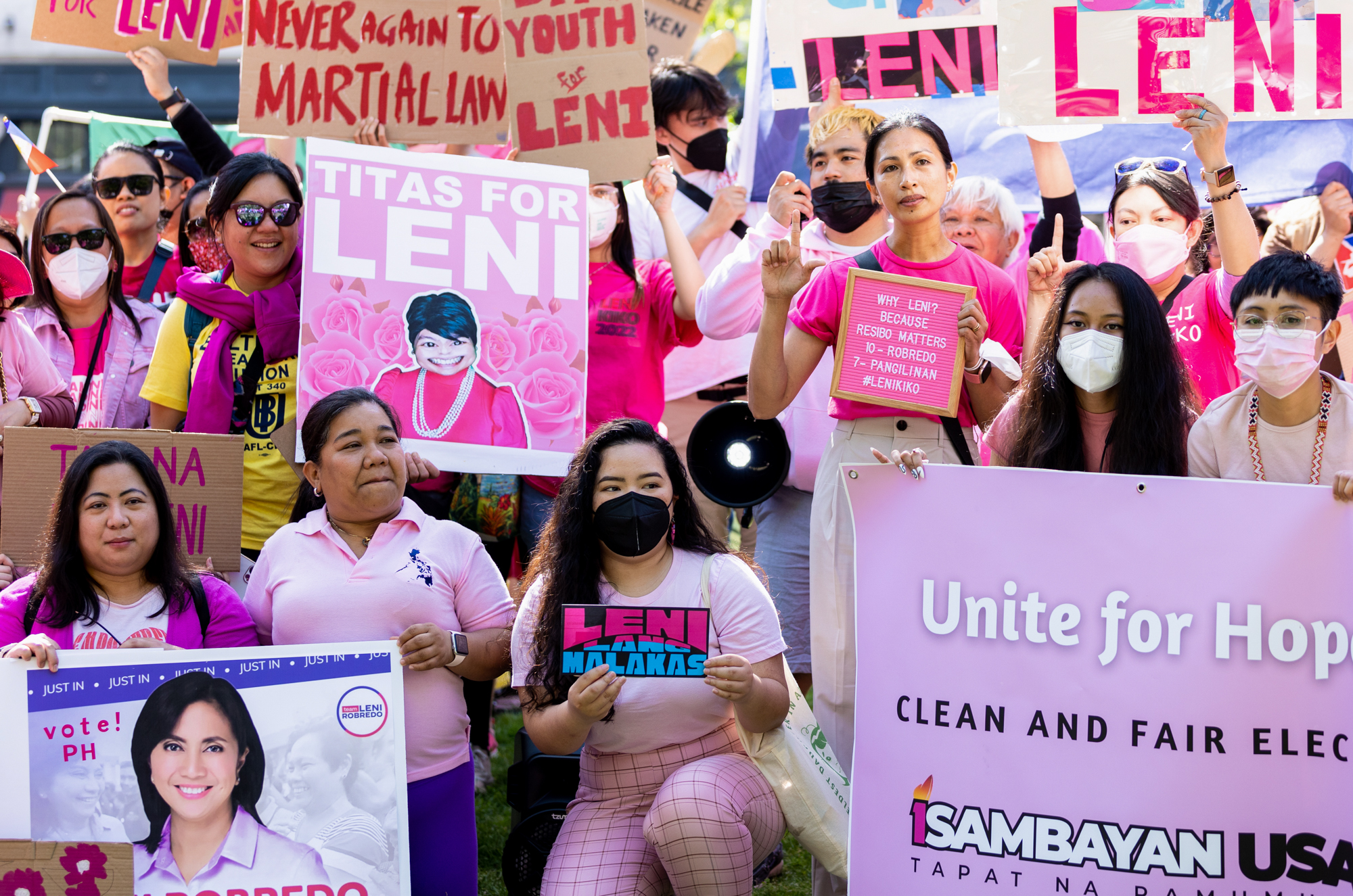 People gathered in Washington, D.C. on April 23, 2022 at the Rally for Hope and Democracy to call for clean and fair elections in the Philippines. (Julia Nikhinson/The Diamondback)

Chants echoed as about 200 individuals gathered in Washington, D.C., Saturday at the Rally for Hope and Democracy to call for clean and fair elections in the Philippines.

The rally, which began in Dupont Circle and ended in front of the Philippine Embassy, was a stand against voter disenfranchisement and cheating in the upcoming Philippine election on May 9, said Bennard Fajardo, regional coordinator for 1SAMBAYAN, a coalition of democratic organizations in the Philippines who support a democratic government.

The rally was part of a nationwide event spanning several cities in the U.S., including Chicago and New York.

Many Filipinos feel the current President Rodrigo Duterte is a repetition of Ferdinand Marcos’ presidency, which many viewed as a dictatorship. During Marcos’ presidency, there were more than 3,200 extrajudicial killings in the country. During Duterte’s time in office so far, there have been about 30,000 extrajudicial killings. There has also been an increase in voter disenfranchisement, especially of overseas voters, under Duterte.

Several local advocacy organizations showed their support for the rally, including KATARUNGAN, Migrante, Malaya and Anakbayan, which advocate for democracy and human rights in the Philippines.

Raymond Diaz is the vice chairperson for KATARUNGAN, an organization that advocates for national democracy in the Philippines. For Diaz, attending the rally was about more than just supporting the movement toward democracy — they said it was important to him to acknowledge the U.S.’ role in the situation in the Philippines.

“It’s really important as an American to show support for the opposition of candidates to the Marcos and Duterte slate,” they said.

As a non-Filipino advocating in solidarity, Diaz found it meaningful to stand alongside Filipinos fighting against dictatorships and reactionary politics, he said.

Many Filipinos in the U.S. are eligible to participate in the upcoming election as overseas voters.
Paulvince Abe, a resident of Herndon, Virginia, who attended the rally, will be voting as an overseas Filipino voter for the second time.

Anna Reyes, who lives in Falls Church, Virginia, participated in the rally because she wanted to oppose the current leadership of the Philippines, which she said is similar to the previous Marcos presidency.

“Leni has what it takes. She’s qualified. She has the best aspiration and the best purpose for the Philippines,” Reyes said.

This was her first time participating in an event like this, and she enjoyed being united for something she and the other supporters believe in, she said.

Malaya Baltimore, an organization supporting the cause for freedom and democracy in the Philippines, helped organize the rally. Katrina Abarcar, a member of the group, was really happy with the outcome, she said.

Abarcar said it was inspiring to see the process of pulling together the rally from the beginnings of an idea to a fully executed event.

“To me, it was really very inspiring and amazing, and it was worth all the sleepless nights and hard work,” she said.

Despite the community being silent at times, Abarcar said she has seen increasing support for Robredo’s campaign.

Abarcar, whose family is Filipino, said she felt that getting involved in the cause for democracy was important after seeing how Duterte resembles Marcos’ time in office.

“It’s an experience we never want the Filipino people to have again, and that’s why we formed Malaya Baltimore to oppose that,” she said.

“We want to promote the candidates of the 1SAMBAYAN slate but also, we want to tell the Filipino community and the world that the people who are running, Bongbong Marcos and … Duterte, will be terrible for the Philippines,” he said.

CORRECTION: A previous version of this story and its headline misstated 600 individuals attended the rally. About 200 people attended. The story also misstated Raymond Diaz works with the Anakbayan organization. Diaz works with Katarungan. This story has been updated.