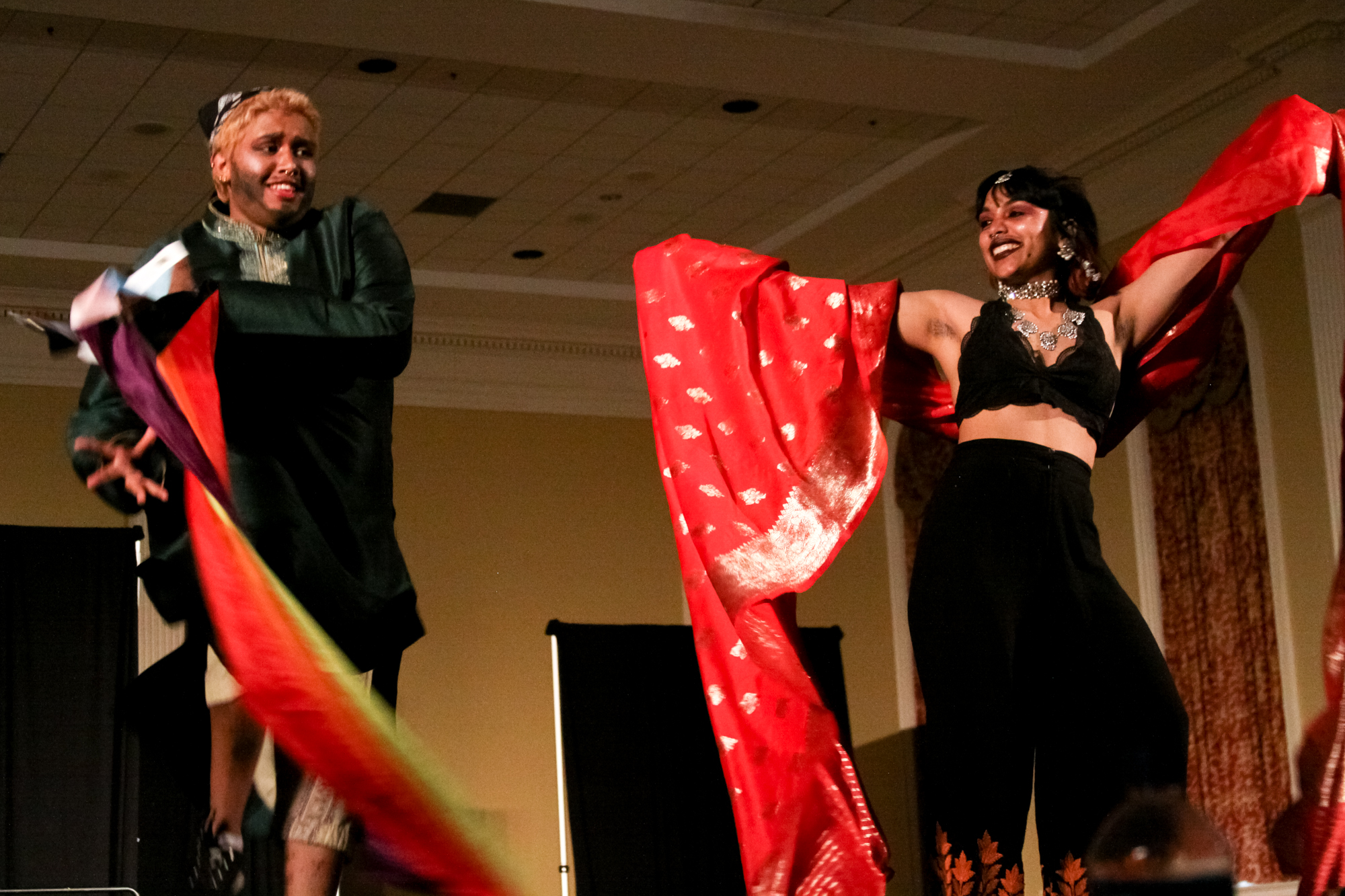 Veena Aruldhas and Aadya Sharma dance down the runway during the Queer Encore at Bloom: Queer Fash & Drag Show on April 19, 2022. (Rachel McCrea/For The Diamondback)

The show was open to all students, and contestants walked the elevated runway in front of a panel of student judges. Outfits ranged from goth androgyny to cow print jackets as contestants walked, danced and lip-synced to everything from Doja Cat and Britney Spears to Bollywood songs.

Aadya Sharma was crowned royalty at the end of the night.

“Queer culture, and drag itself specifically, is taking who you are and turning it upside down,” the junior mechanical engineering major said. “It’s camp and passion and fashion and community. That’s what drag is.”

The show was emceed by Naveena Aruldhas, a senior information science major and one of the event’s organizers.

“This is actually the first event that I will be emceeing as an out, nonbinary queer person,” they said. “This will be very significant because I’m able to show the side that’s always been there … I’m able to live and emcee as my authentic self.”

For some contestants, it was their first time performing at a queer fashion event.

“I think the last time I was on stage was my sixth grade talent show,” said Amira Ahamed, who walked at the event. The senior psychology major said they enjoyed challenging their fears at Bloom and would do it again.

For much of queer history, Aruldhas said, fashion has allowed people to express their culture and identity.

“I wanted Bloom to be that space that accommodates space for people to be their authentic selves,” Aruldhas said.“If [members of the LGBTQ+ community] want to perform, they can perform and if they want to walk, they can walk, but also give credit back to the communities and elders that have provided that space for us.”

According to Aruldhas, inspiration for the show was taken from last fall’s Black Student Union Homecoming Fashion Show, as well as ballroom culture, queer fashion and TV shows such as RuPaul’s Drag Race and Pose.

“I really enjoyed how confident everybody was, I liked the diversity of outfits,” junior computer science major Chisomebi A. said. “The audience and the judges were really supportive.”

Bloom is one of the several events held during April to celebrate Pride Month. So far, the student run Pride Month Committee and Multicultural Involvement Community Advocacy have hosted a zine workshop, a “Gaymer Night” for queer video game fans and several other events.

On April 22, the Stamp Grand Ballroom will feature the SEE Drag Show, headlined by RuPaul’s Drag Race finalist Crystal Methyd. The month will culminate with Pride Prom on April 29 and the Let’s Say Gay Parade on April 30.

Looking toward the future, Aruldhas hopes Bloom will usher in similar events that allow queer and trans students to express themselves in a safe space.

[‘A Kind of Ache’: builds a world for the queer community]

“I think it was about time that a queer student org has a drag show or a fashion show where people can be themselves,” they said.