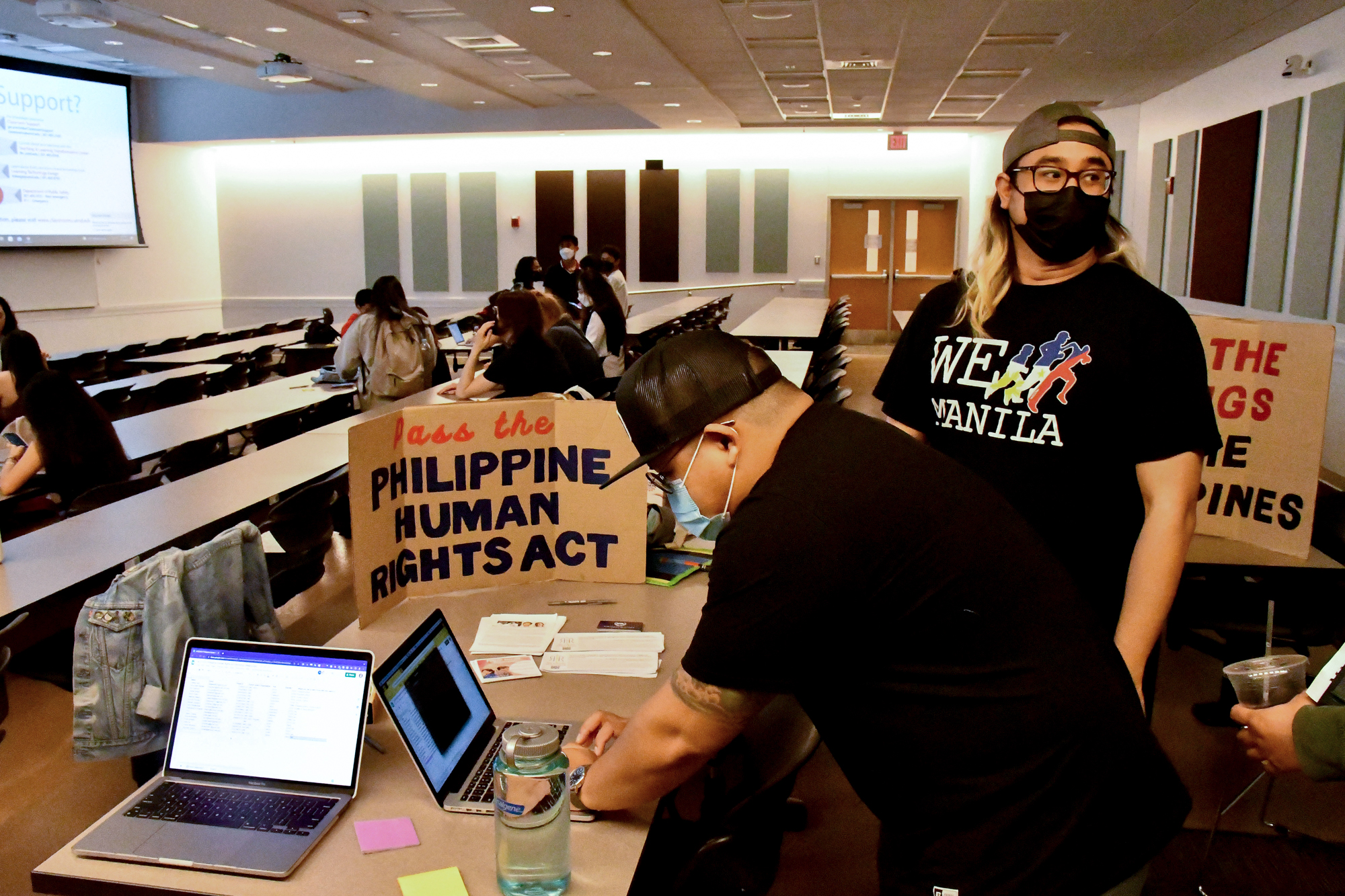 Students sign in at a collaborative meeting between the AASU and Kabataan Alliance on April 4, 2022. (Nene Narh-Mensah/For The Diamondback)

The University of Maryland’s Asian American Student Union and the Kabataan Alliance, a Filipino youth and student activism group, led an interactive workshop on the human rights crisis in the Philippines Tuesday.

The workshop titled, “For the Ones We Left Behind,” was created to encourage support for the Philippine Human Rights Act, which was introduced into Congress last year.

This legislation would limit the federal funds that could be used to assist the military or police in the Philippines until the country takes certain actions, including investigating and prosecuting human rights violations, according to the official bill summary.

The AASU hosted this presentation at a crucial point due to the upcoming presidential elections in the Philippines on May 9, said Marjorie Antonio, the AASU co-president.

“We see this history in real time, we see … the massacre that happened for the Lumad teachers just happened a month or so ago,” the senior American studies and history major said. They are referencing the killings of the New Bataan 5, a group of community health and education workers as well as their two drivers in the Philippines, back in late February.

“Folks have been flyering and trying to bring attention to the UMD community,” Antonio said.

“It’s not just a Filipino issue though it is led by Filipinos … it’s also an American issue, and that involves our tax dollars,” said Chrissi Fabro, Kabataan Alliance’s external vice president.

“I have a responsibility to hold my government accountable to the human rights violations that they also participate in,” Coleman, who is the co-chair of the Collective Liberation Committee at the United Students Against Sweatshops Local 54, said. USAS was one of the meeting’s co-sponsors, along with the Maryland Committee for Human Rights in the Philippines.

The speakers also highlighted the abuses of former Philippine President Ferdinand Marcos. They aired a video that showed Filipino teens and young adults talking to elderly victims of Marcos’ regime.

Attendees then participated in small group discussions about the information presented.

Sophomore music education major Jayden Brittain said she valued the meeting because she heard from people directly impacted by the policy and events shown in the meeting.

Brittain said one of the members of her small group said their parents had a similar educational experience to the people shown in the video.

Attendees were shocked to learn of the human rights violations that took place under martial law as a part of Marcos’ administration. They said they weren’t taught about them in school.

The sophomore was able to make connections between the Philippines and the U.S. as historical context was missing from schooling in both countries.

“It’s interesting to note how education systems have failed us in some ways. In the Philippines, as well as in the United States,” Brittain said.

Fabro said the AASU and Kabataan Alliance wanted to emphasize the interactive nature of the presentation. For example, an icebreaker had students sharing what they would do with $700 million to support their community on sticky notes and posting them in the room’s front wall.

“I think that the way that Chrissi and Jack went about it was really effective and made the discussion really lively,” Antonio said.

The Kabataan Alliance’s goal is to boost support from Maryland legislators, specifically Rep. Steny Hoyer and Senator Chris Van Hollen for the PHRA, according to Fabro.

They gave participants time to call Rep. Hoyer and sign a petition to get the law passed during the meeting.

Fabro emphasized that through events such as this workshop, they make a great impact on supporting Filipino people.

“Through the work that we do through these workshops and getting involved in different organizations, we actually become less and less far away from those that we left behind,” Fabro said. “It is through our collective action and our advocacy that … we actually become one with our people.”