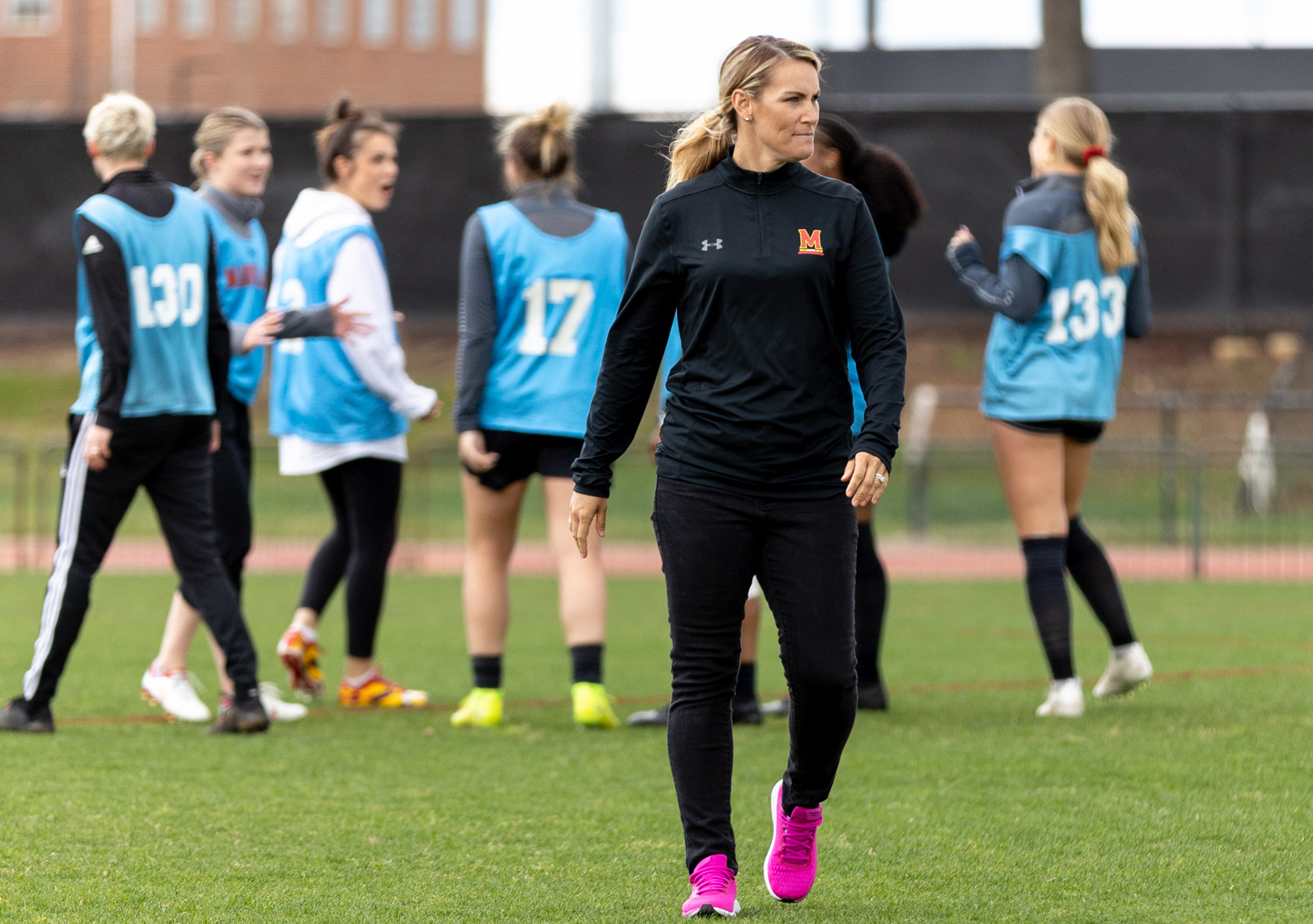 “They had full stands, I mean, it was so crowded,” Nemzer said. “I remember standing behind the goal and hearing the goalkeeper talking and everything. And when they won, they celebrated and I was like, ‘That’s what I want to be a part of.’”

It was an experience that contributed to the beginning of her journey as a player, first at the youth club level with Freestate — now Maryland United FC — and Bethesda SC before heading to New Jersey to play college soccer at Rutgers.

“There was a play where a center back absolutely just came out with a ball, was such an unbelievable player and just had this attitude about her and I was like, ‘I want to do that. I want to be that person,’” Nemzer said.

The Crofton native slotted in at center back when the Scarlet Knights traveled to Ludwig Field and suffered a 1-0 loss to the Terps in 2005. Nemzer returned to Maryland a handful of times after joining Rutgers’ coaching staff following the end of her playing career.

Appointed the 10th coach in program history on Dec. 10, 2021, Nemzer joined the Terps after 14 years of coaching with the Scarlet Knights, taking on her first collegiate level head coaching role.

The next time she steps onto Ludwig Field, she’ll be Maryland’s coach, bringing her journey full circle.

“This program really shaped me, who I am, and if I can do that for one other little girl that’s maybe a ball girl, that would be invaluable to me,” Nemzer said. “I want to make sure that they have that opportunity.”

After suffering two ACL tears during her high school years, Nemzer was able to spend time around her coaches.

“When you get that taken away from you, I think you appreciate the game so much more,” Nemzer said. “I really spent a lot of time next to my coaches and learned a lot of what they were saying.”

In her first game back from the first injury, she tore her ACL again.

The time spent with her coaches and the knowledge and appreciation she gained for the game while dealing with both injuries had already planted the seed of coaching in Nemzer’s head at a young age.

“I was out for about a year and a half,” Nemzer said. “And then I think at that point, just being around the game, knowing that it got taken away from me, it really was in the back of my mind to start becoming a coach at that point.”

Nemzer would commit to Rutgers, where she’d be a three-time co-captain of the Scarlet Knights. She made 75 appearances during her time at Rutgers, earning an All-Big East honorable mention at the conclusion of her senior year.

Despite having an internship lined up after she finished playing, Nemzer jumped at the opportunity to be a volunteer assistant with the Scarlet Knights, quickly transitioning and combining the skills she learned on and off of the field.

“Being a center back, I feel like naturally you’re sort of a leader, you’re vocal and everything,” Nemzer said. “So I think it went hand in hand.”

She rose up the coaching ladder at Rutgers, serving as a volunteer assistant for two years and an assistant coach for four years before moving up to associate coach under current Scarlet Knights coach Mike O’Neill for eight years.

Nemzer volunteered a lot of time with local youth clubs before taking on larger roles. She won two national championships as an assistant with Players Development Academy Slammers before becoming the first female head coach to win an Elite Clubs National League National Championship in 2015.

She didn’t only embrace the opportunity to help players develop at the club level, but appreciated the chance to be a female role model as a coach many players — including Nemzer — didn’t have.

“I never had a female coach,” Nemzer said. “I think that relationship is really important to have not only a strong female role model, but the correct one, the positive one.”

Nemzer has been highly touted for a head coaching job for some time and was named as one of the Top 5 Associate/Assistant Coaches in the NCAA by Top Drawer Soccer in 2018.

Despite receiving offers from other schools, Nemzer wanted to wait for the perfect opportunity to take on her first head coaching role at the collegiate level.

“I was offered a couple other Power Five schools, but I don’t know how serious they were about winning or developing young ladies in the right way,” Nemzer said. “If my name is going to be attached to something, I want to do it the right way.”

After reaching the Big Ten tournament for the first time in program history in 2019, the Terps have struggled massively.

Previous coach Ray Leone amassed a 27-60-18 record over six seasons at Maryland, notching the team’s sole winning season during his tenure in 2019.

In their last two seasons, the Terps held a combined record of 4-19-7. Maryland is currently on the second longest winless streak in conference history, having failed to win its last 24 games against Big Ten opponents.

Nemzer hopes to make an instant impact on a team that has failed to get results over the last couple of seasons.

Nemzer has bolstered her staff since joining the Terps by adding four coaches, one of whom will serve in a newfound role.

Kenie Wright has been named Maryland’s first ever player development director. Wright played for four years at Rutgers during Nemzer’s tenure and was a two-time captain before being drafted to the NWSL and playing for NJ/NY Gotham FC for three seasons.

Nemzer hopes access to Wright’s experience as a student-athlete, and a professional can help guide players during their time at Maryland.

“The reason why it was important for me to bring in Kenie is because she wrote her own story,” Nemzer said. “So many people counted her out … I think overall, that’s the message that we need to send to our current players.”

Alex Ng will bring a variety of expertise to the coaching staff as an assistant. He previously coached at Richmond and Indiana, was a student assistant at Valparaiso for four years and has worked with U.S. youth national teams as a video analyst.

Ely played in net at Fairfield before racking up 15 years of coaching experience at the Division I level.

Nemzer’s husband, Joe Nemzer, has also joined the staff as a volunteer assistant. He has coaching experience at the professional level in the NWSL as well as in all three divisions of college soccer.

“Joe is a brilliant soccer mind, and he is one of the best recruiters that I’ve ever come across as well,” Nemzer said. “He’s very much in touch with the youth game.”

Recruitment and the future

Along with an entirely new coaching staff, Nemzer is set to bring 13 players in with her inaugural signing class.

The class is made up of four transfers and nine freshmen, with a majority of the incoming players hailing from Maryland. Recruiting from Maryland and the wider Washington, D.C.-Maryland-Virginia region is a key to Nemzer’s plans for the program.

“I want every little girl in the DMV to put on a Maryland women’s soccer T-shirt and be like, ‘That’s where I want to go,’” Nemzer said.

After joining the Terps, Nemzer was able to keep the commitment of All-American forward Kelsey Smith and was able to flip former South Florida commit Éva Mowery, who broke records for career goals and assists at Broadneck.

West Virginia transfer and Maryland native Juliana Lynch has also joined the Terps for the 2022 season, racking up 51 appearances over three years with the Mountaineers. The midfielder won three straight 1A state championships with Sparrows Point during her high school career.

“She would be somebody that I would expect to come in right away and have an impact,” Nemzer said. “She’s going to be a playmaker for us in the midfield. She’s already had so many games, so much experience.”

A center back in her playing days and holding responsibility for Rutgers’ defense during her time as associate head coach, building Maryland up from the back is a key goal for Nemzer, especially because the Terps conceded the second most goals per game in the Big Ten last season.

“The defensive mentality has been something that we’ve been really focusing on,” Nemzer said. “We are going to be disciplined, we’re going to be very detail oriented.”

“Long term, I want to win a Big Ten championship, national championship. I mean, that’s what every coach dreams of,” Nemzer said.

And personally, Nemzer would also like some commemoration of her own on campus in the form of an ice cream flavor at Maryland Dairy, which many long-serving coaches at Maryland can boast.