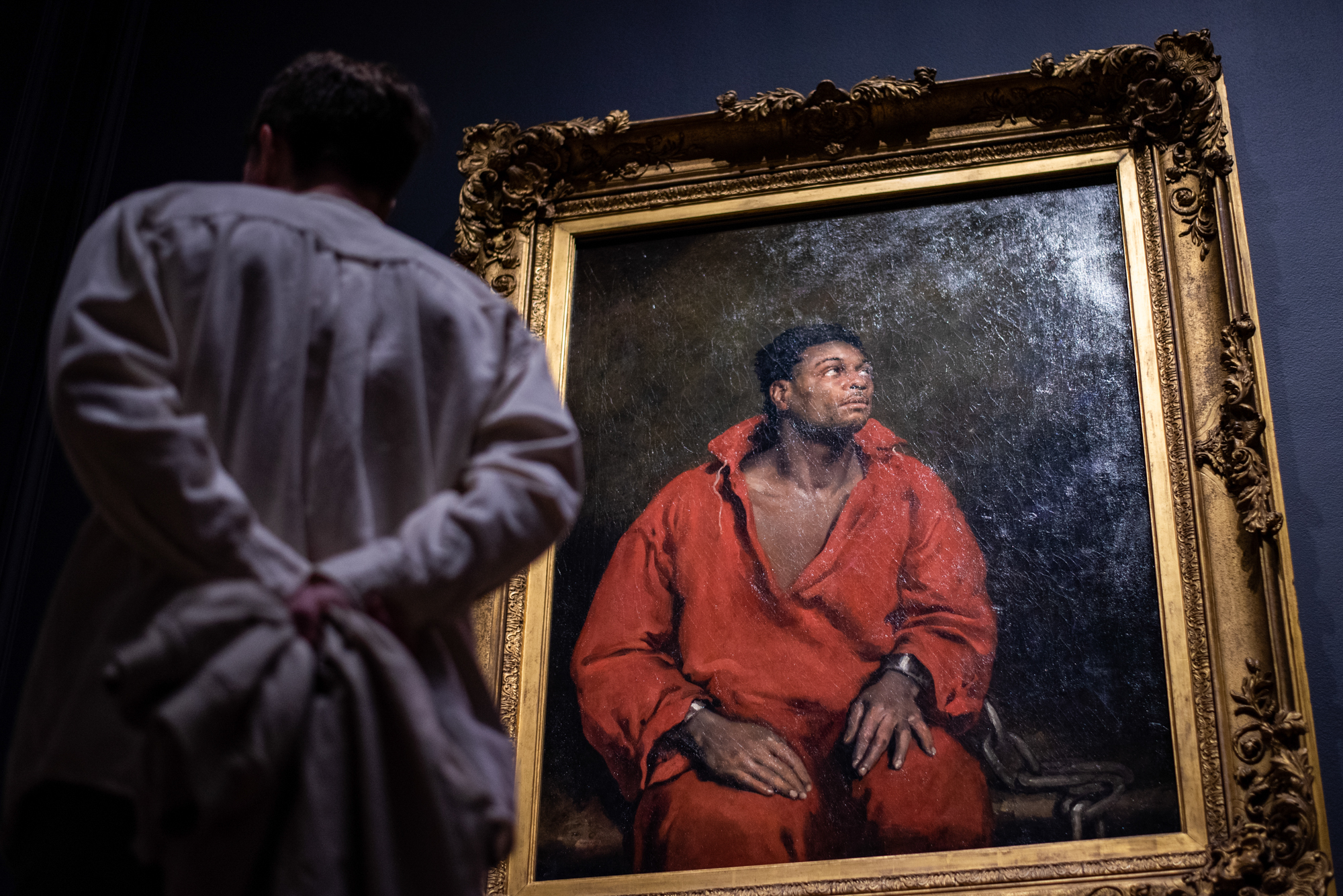 Gallery-goers are now able to explore Afro-Atlantic Histories, a National Gallery of Art exhibition that explores the impact of the Atlantic slave trade and its dispersion of Black people across the globe.

The exhibition, on view since Sunday, guides the viewer through six thematic phases that intertwined more than 130 art pieces from different eras, telling different segments of the evolution of the Atlantic slave trade through various artistic mediums.

The experience opened with a reflective steel map, connecting the U.S. and Africa. According to artist Hank Willis Thomas, A Place to Call Home is a reflection on the lost connection to home Black people felt as they were shipped away into slavery and the devastating impact that rippled through generations.

The opening thematic section, Maps and Margins, focused on art from the Atlantic slave trade and how it disseminated enslaved people across the globe. It housed one of the most striking pieces from the exhibition, titled Voyager.

The subject, an enslaved woman, looks far off at the horizon and seems bound, contrasting with the beautiful swirls framing the form. The art draws the viewer in with its vibrant colors and broad brushstrokes but elicits a somber response on further inspection.

The Haitian veves that surround the painting bring individual pieces of the overall story of change and transformation that occurred through the Atlantic slave trade. One of the symbols depicted a medical chart of unborn babies, circled in red dripping paint, which made me mourn for all of the lives and future generations that were lost.

The painting was beautiful and haunting, but dug at me beyond just the surface and settled a deep wave of grief over me the longer I looked on.

The exhibition as a whole weaved together historical pieces of art, which were largely European-centric and came from a white perspective on slavery, and modern retellings of history from Black artists who were able to finally tell their stories, which provided fascinating juxtapositions and a thorough account of a wide history.

In the section Enslavement and Emancipations, this pattern was exemplified in a triad of pieces, all centered around the story of a former slave named Gordon who was photographed after being beaten, causing an outcry among abolitionists and becoming a rallying point for the anti-slavery movement.

The exhibition presented this story in three different perspectives: Ex-slave Gordon (2017), On To Liberty (1867) and Sem Título [Untitled] from the series Memória Black Maria [Memory Black Maria] (1995), which all in some way reference the story of Gordon and the impact it had across very different times.

The Rites and Rhythms section of the exhibition provided a very important balance to the overall narrative as it delved into the beauty of Black religions and musics, a respite from the trauma and extremely difficult depictions of brutality.

The exhibition includes work from David C. Driskell, a University of Maryland professor renowned for his knowledge on the history of African American art, who died in April 2020. The piece, Current Forms: Yoruba Circle, depicts Yoruba deity Shango in bright and vivid swirling brushstrokes, combining traditional culture with modern practices.

Rites and Rhythms leads into Portraits, which was my favorite section of the entire exhibit. The cavernous space of the National Gallery was filled with portraits of Black leaders and artists in different mediums, art aesthetics, sizes and across time. As a frequent museum goer, I’ve never seen anything like it, and it made me take a critical look at the art world for something like this to not be more common.

Ntozakhe II, (Parktown), which has been used often as the main image for advertising the exhibit, hung in the middle of the exhibition, demanding attention in its striking contrast, ethereal nature and scale.

Artist Zanele Muholi accompanies the viewer through the audio tour and delivers some of the most powerful words of the exhibit.

“Why are Black lives so fascinating? Why are we here? Why are ordinary people only featured in any magazines when there is tragedy? Why are there no images of queer people and especially Black people and yet people are told you have the right to be? I just wanted to produce images that spoke to me as a person, that still speak to me now. I’m boiling inside. Like any other great man, I want to be counted in history,” Muholi said in the audio transcript, although as I craned up to look at the art, it felt like Muholi was saying it straight to me.

Afro-Atlantic Histories will challenge you to take a critical look at history and the way we consume it. It was clearly curated with a great deal of thought and attention to history and storytelling.

Be prepared to take a step back, take a deep breath, because the content is at times disturbing and difficult to look at, but it tells history in an involved and comprehensive way. Plus, you can unpack at the National Gallery’s cafe, which is serving jerk chicken as part of the exhibition experience.

The exhibition will be open at the National Gallery of Art in Washington, D.C., until July 17, and has several performances, lectures and concerts offered through its time on display, which can be found on its website.