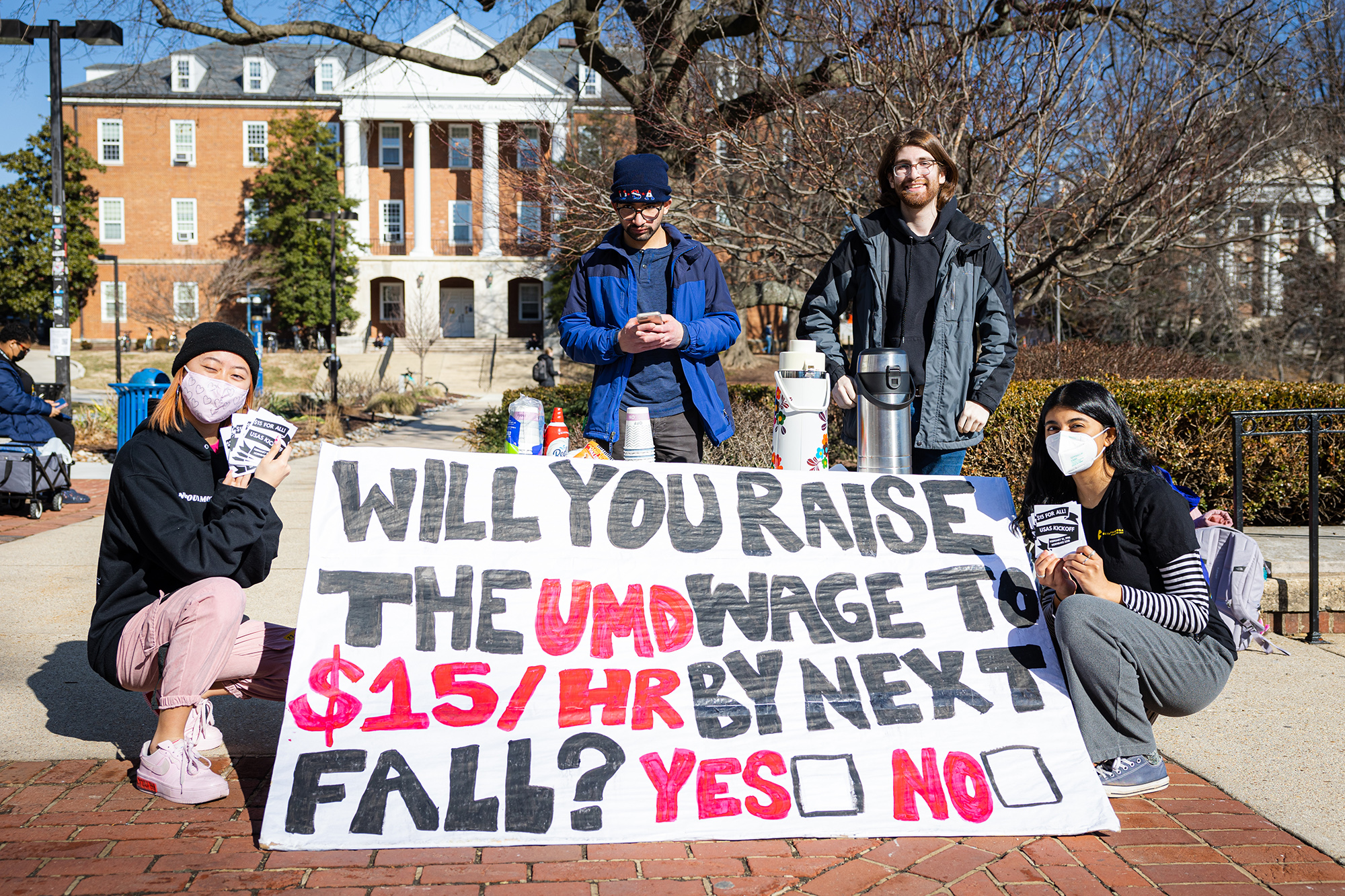 On March 4, the University of Maryland’s United Students Against Sweatshops chapter, of which I am a member, had a pretty unproductive meeting with Student Affairs Vice President Patty Perillo. While the months-long living wage campaign has yielded wage increases for some workers across the University System of Maryland, this university’s students’ specific request for at least a $15 minimum wage for every single student or contract worker on the campus was unfortunately met with the same noncommittal response that was given when the question was raised last semester — they’re “working” on it!

According to Perillo, a campuswide $15 student worker minimum wage might require either raising student fees or making cuts to services, but Perillo hasn’t committed to those options.

This response is suspicious for a few reasons. Firstly, it unfairly positions student workers directly at odds with the rest of the campus by making this issue a trade off between axing student resources or raising fees and paying resident assistants, community assistants, dining workers and others a reasonable wage. Presenting Student Affairs as this financially disconnected body allows the administration to act as if there’s just nothing it can do to truly increase student wages, thus shifting the onus onto the workers making this request.

What makes this response feel even more disingenuous is that this university does have the money. This university’s projected fund balance for the fiscal year starting in July is a whopping $373 million, a $17 million increase from last year.

What’s the fund balance, Malcolm? The university’s fund balance is essentially the difference between assets and liabilities. In general, it is the balance remaining after the assets have been used to satisfy the outstanding liabilities. These assets are basically any financial entity that can be used to mitigate risks or fulfill what the school identifies as needs. Two types of fund balances are restricted and unrestricted. Restricted funds primarily come from research grants and donations for specific purposes, such as student aid. Unrestricted funds — that’s money without external constraints on its use — primarily come from state appropriation, tuition and student fees. For $373 million of unallocated, general funds to sit idle while student workers request a pretty bare bones wage increase — or just wages at all for RAs — this university demonstrates yet again that its top priorities are public image and profit. To hear that cutting student activities is the most realistic way to fund a wage increase is laughable.

There’s such a vast disconnect between what this university says its goals are and what its actual goals are. Since this campaign began, both President Darryll Pines and Perillo have expressed that $15 per hour for student workers is something they’ve both been keeping at the forefront of their agenda for a very long time.

That rhetoric has always felt empty to me, and the meeting with Perillo didn’t do anything to help that. Statements like, “We will get to a $15 minimum student wage. We will. The question is the timing,” and, “We’re exploring what is it that we can do to do this without much cost to students in terms of fees or in terms of reducing operations or programs,” are just scripted platitudes that beget no concrete commitment to raising wages by next fall.

RAs, CAs, dining hall workers and any other student worker contribute more to this campus community with their labor than any administrator. There shouldn’t be hand-wringing and hesitation when they ask to be compensated.

And what is $15 per hour really, when the cost of living for one adult with no kids in Prince George’s County is $19.82 per hour? The administration can’t even commit to less than a living wage.

Todd Holden, AFSCME Local 1072 president and web developer at this university, put it best during our conversation: “The strategic plan talks about improving the world for everybody. But when it comes to starting in our own backyard, about addressing the obvious inequities that are brought about by the economic conditions that we’re facing, then it really seems to become difficult. And I think that it’s really incumbent upon everybody to ask the question about why that is.”