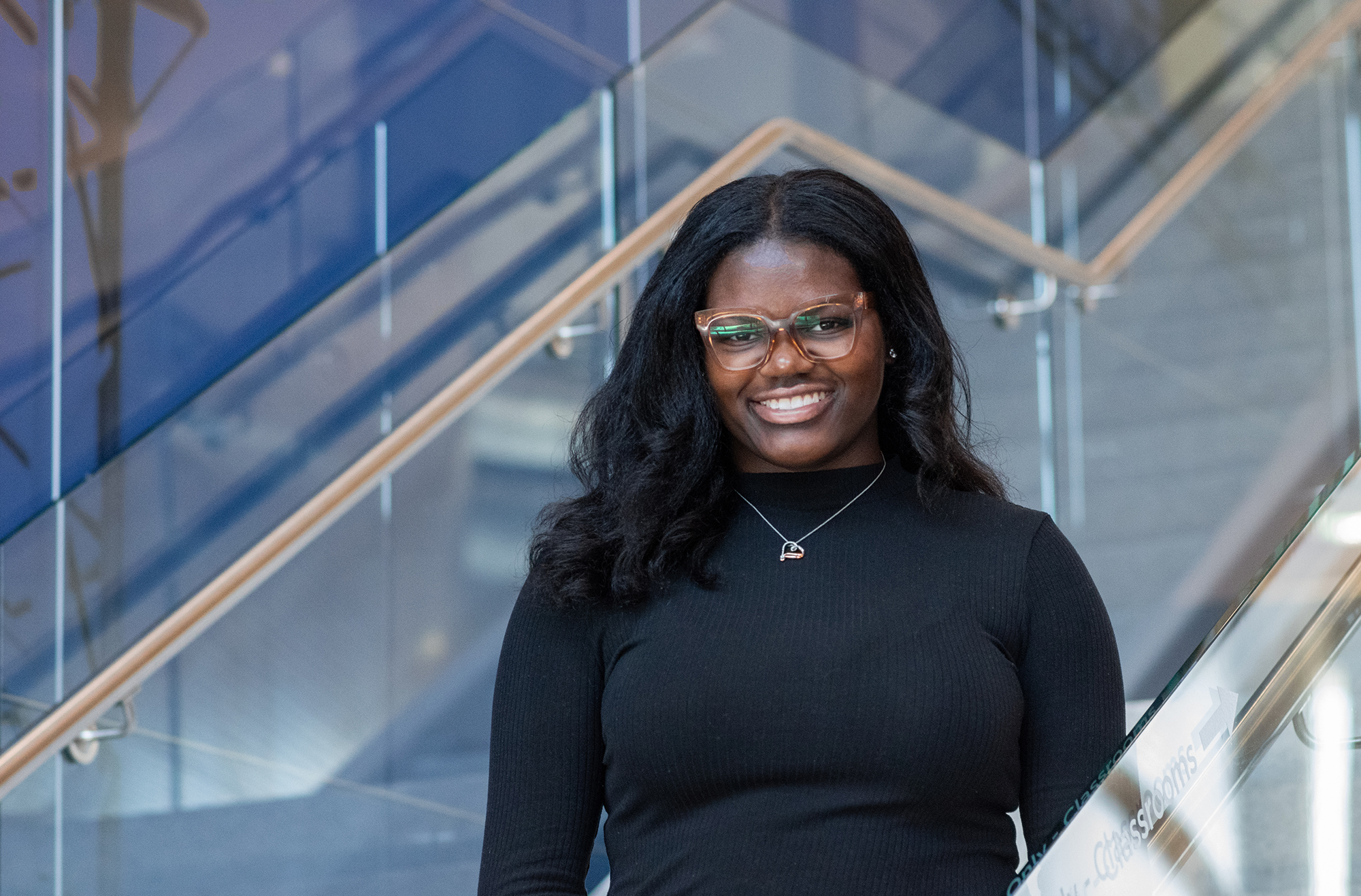 Bryana Rowley, a junior bioengineering major at UMD, poses for a portrait inside A. James Clark Hall on March 13, 2022. Rowley created the Black STEMpowerment platform to develop a strong community and encourage support among black womxn in STEM. (Autumn Hengen/The Diamondback)

In August 2020, Bryana Rowley was living alone in Oakland Hall at the University of Maryland when she decided to film the first video for her Black STEMpowerment Instagram account.

“I’m just like filming it 5 million times to make sure that it sounds good, right,” the junior bioengineering major said. “It was my first time ever doing a video like that on Instagram.”

Black STEMpowerment is an online platform dedicated to showcasing and highlighting the stories of Black womxn in STEM. Rowley said she aims to provide a place to amplify their voices in higher education where structural racism can lead to experiencing imposter syndrome and microaggressions.

“I knew that I wanted to be able to create something that focused on Black womxn in STEM,” Rowley said. “I kind of got the idea just sitting at home during the [COVID-19] pandemic wanting to make some type of impact.”

On her platform, Rowley spells the word “woman” as “womxn” — a change she said addresses the intersectionality of being a Black womxn.

“I try my best to always use womxn with an ‘x’ in it just so that it’s always a reminder that people who belong to separate communities within Black womxn are also a part of that space,”Rowley said.

Her first post to Black STEMpowerment, an introductory video about why she started the platform, garnered about 1,000 views, she said.

“I was definitely nervous, but after that, and I saw the response that it accrued, I felt a bit more comfortable,” Rowley said.

On the Black STEMpowerment platform, Rowley posts STEMpowered spotlights, which are posts that share the stories of students and professionals who are Black womxn in STEM, as well as STEM Talks, where Rowley talks with her guests one-on-one via video about their experiences as Black womxn in STEM.

“Oftentimes, Black womxn in higher education, or just in STEM in general, will feel very alone,” Rowley said. “My hope is just to bridge the gap … and make sure that we’re uplifting that community and being there for each other if no one else is there for us.”

In order to contact her guests, Rowley direct messages them on Instagram, which she said was nerve-wracking at first.

“What’s the worst that could happen? They’d either read my message and not say anything, like it or say, ‘Yes,’” Rowley said. “I just kind of went with that mindset and kept going and hoped that it would work out.”

And it did work out. Now, nearly two years later, Black STEMpowerment has more than 3,000 followers and nearly 200 posts highlighting the achievements of Black womxn in STEM from all over the world.

One of Rowley’s guests on the platform, Sarah Robertson, is a bioengineering doctoral student at this university. Robertson said she agreed to be a guest on Black STEMpowerment because she agrees with Rowley’s mission and wanted to support her however she could.

“It’s one thing to be a woman or a minority in these fields, but then it’s another thing to actually bridge the gap and show the world that there are a variety of women and minorities in these fields.” Robertson said.

Another guest, Dr. Melissa Horenstein, said she graduated in spring 2021 with a Doctor of Pharmacy from Florida A&M University when Rowley reached out to her.

While Horenstein’s mother is a nurse practitioner, she said she knew she wanted to pursue medicine after she was diagnosed with sickle cell anemia at birth and was treated mainly by white doctors.

“[My disease] was treated by providers that didn’t look like me or have a true understanding of what I was going through, or have an understanding of my background and my culture,” Horenstein said. “I wanted to become the doctor that I never experienced growing up.”

Growing up in Miami, Horenstein said she did not have a community such as Black STEMpowerment.

“[Science was] not something that we would talk about in our communities… It was never a point to be like, ‘Yeah, science is a very great thing that we need to focus on and things that you’re capable of doing as a Black woman,’” Horenstein said.

Looking ahead, Rowley said she wants to keep up with Black STEMpowerment after graduation, and may even be interested in taking it beyond the screen.

“There isn’t a lack of knowledge or intelligence with young Black girls who are pursuing STEM, it’s just a lack of exposure,” Rowley said. “Elementary school or middle school, I think it’s a perfect opportunity to kind of spark their interest in STEM and give them the confidence and the skills to believe that they can do it.”