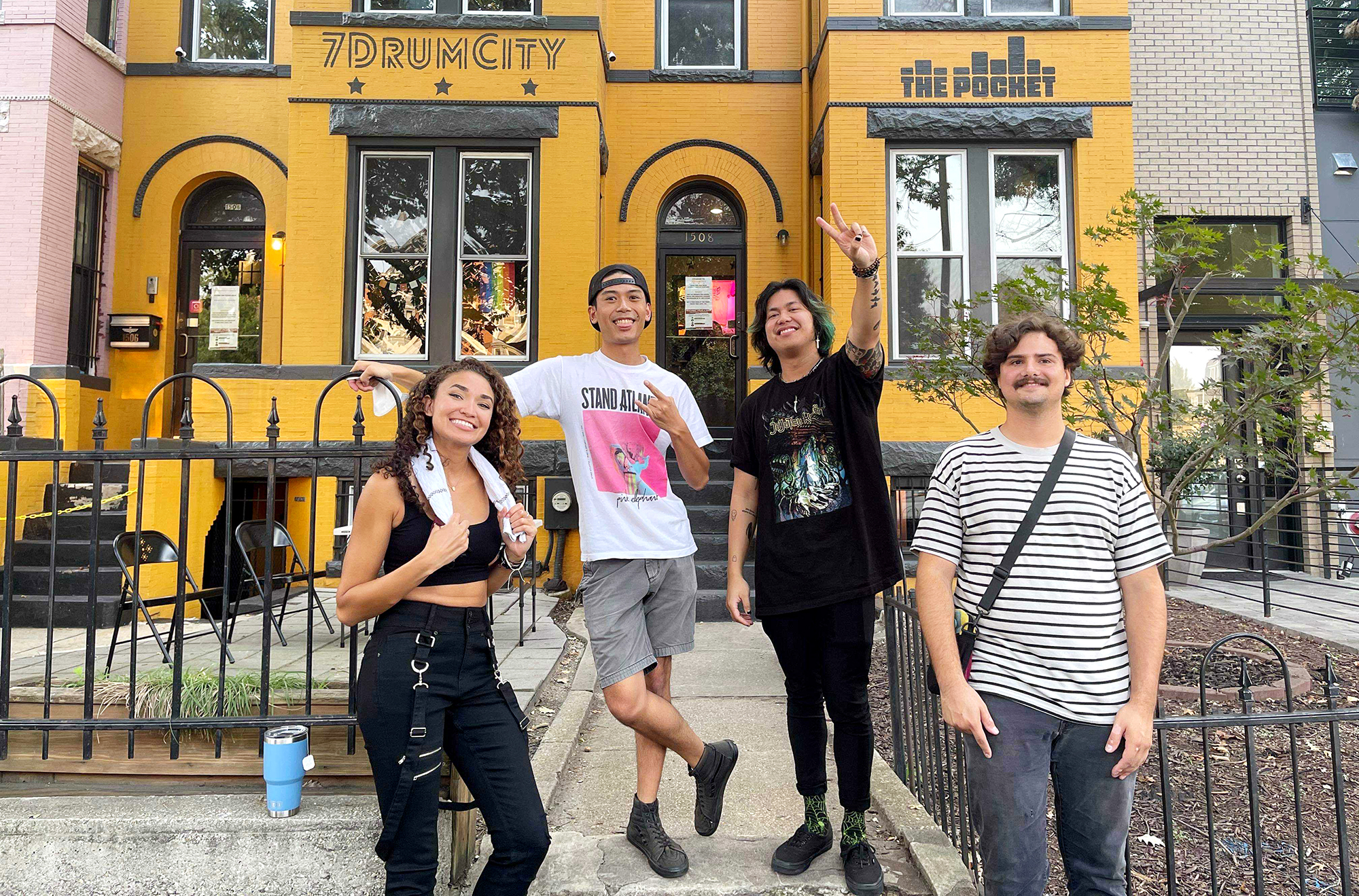 Lead guitarist Ken Tilar said he was nervous as he stepped onto the stage of the State Theater of Havre de Grace on Aug. 20, 2021. From where he stood he saw this was a big venue. Tilar began to worry about messing up his parts especially because this was his first real performance besides performing battle of the bands in high school.

When lead vocalist Malerie Gamblin approached Tilar onstage and said she was scared, he asked if she had ever done this before. She answered no.

“I was shitting myself,” Tilar said.

As a relatively young pop-punk band with only one EP and a handful of singles released so far, Keep Your Secrets has kept themselves busy writing new music and performing throughout the Washington metro area. Over six months after their first show in Havre de Grace, they are in the works of their second EP and plan on opening with musicians Jhariah and Spring Silver on Friday night at Comet Ping Pong.

Keep Your Secrets came into being in spring 2020 while the band did not expect the pandemic to last very long. Drummer and William & Mary alumnus Matthew Nguyen-Ngo had recently moved back to the Washington, D.C., area after leaving Richmond, Virginia and quitting his old band. Missing that experience playing pop-punk music and bored early on in the pandemic, he contacted Gamblin, a fellow William & Mary alumna who was already looking for people to make a cover band.

One of the first real projects Keep Your Secrets released was a cover of “Forget Me Too” by Machine Gun Kelly done in what Nguyen-Ngo described as a more contemporary style of pop-punk. The band would keep writing more songs, including a cover of Billie Eilish’s “Therefore I Am” which they released, while keeping their original music on the back burner. They were hoping to play their new music live, hoping the pandemic would end sometime around August. But of course, 2021 didn’t go as planned.

Yet, the band was miraculously still able to find an audience as the live music scene remained dormant. In April 2021, musician Joseph Dubay, also known as emojoseph on TikTok, recommended Keep Your Secrets along with other female-fronted groups to his fans.

The band blew up immediately. Nguyen-Ngo said he remembers waking up to a million notifications the next morning after Dubay’s recognition. There was so much activity on his phone it ended up dying three times. That moment remains burned in his brain, Nguyen-Ngo said.

With new listeners probably wondering what the band was going to do next, Gamblin and Nguyen-Ngo started assembling musicians who would make up their band. In the case of Virginia Commonwealth University alumnus Tilar, Nguyen-Ngo found him while searching for bandmates on Reddit. Once Keep Your Secrets fully formed with the addition of  Tilar, Kyle Kubovcik and Jasiu Mich, they released their first original, “Forget Me When You’re Gone,” in June 2021.

Being a female-fronted band, Keep Your Secrets also stands out in pop-punk as it’s entirely made up of people of color. The band aims to make their mark within a genre of predominantly white males, according to their description on Spotify.

Despite the pandemic, the live music scene seems to have begun recovering and Keep Your Secrets was able to join the resurgence at the State Theater of Havre de Grace. In the green room, a place where performers typically rest before and after a show, they were able to talk to other musicians and while onstage they played for a fun crowd. Nguyen-Ngo said he noticed a few mosh pits had formed while they were performing.

When Tilar noticed the audience vibing to the music, it eased his nerves.

“It’s a nice feeling,” he said. “I don’t think I’ve experienced that kind of joy in my life.”

“There’s nothing like it,” Nguyen-Ngo added. “It was like I was going through withdrawal for several months.”

Gamblin said she felt winded after performing for the first time, partially from a lack of exercise but also from being scared earlier. People approached the band members and expressed surprise. They told the band they couldn’t believe this was the first show they had ever done.

Keep Your Secrets followed up the momentum of their first show with even more performances in the following weeks. This included a release show for their first EP, a show at The Depot in Baltimore, and a Halloween-themed show at The Ugly Mug in Washington, D.C.

In February of this year, the band was busy as they had three live performances in Baltimore, Washington, D.C., and Fredericksburg, Virginia. Now they are working on a new EP they hope to release this summer while also raising money for a possible tour. Nguyen-Ngo said the band wants to put their music out in front of new people in person.

The band will be performing at Comet Ping Pong on Friday and they said they’re more than excited to be there. Nguyen-Ngo, who also works as a substitute teacher, described how it’s difficult for him to concentrate whenever he’s going to perform soon.

“When the bell rings, I’m out!” Nguyen-Ngo said. “Playing music and playing live with this band is what I live for.”