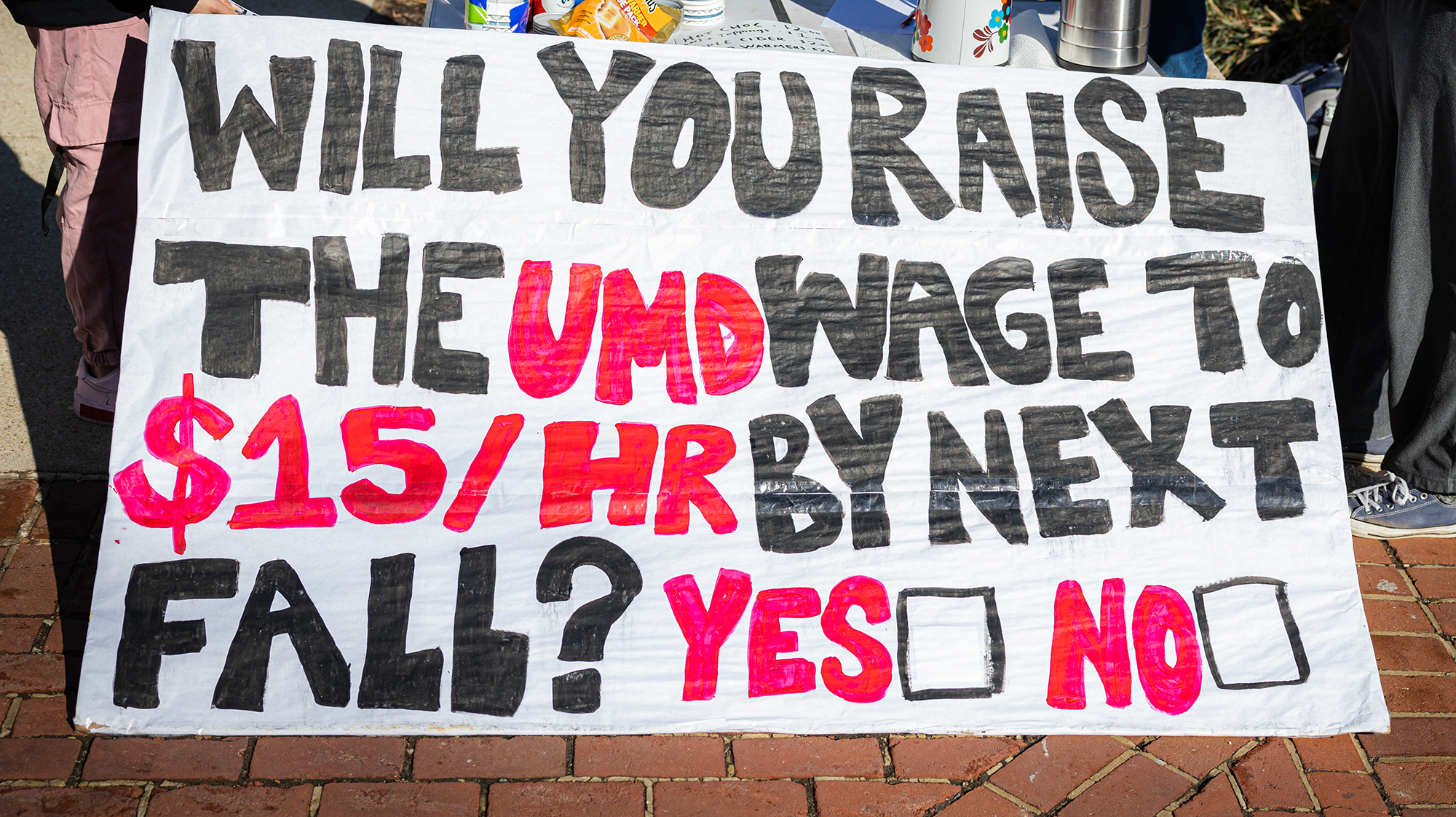 Months after the University of Maryland’s chapter of United Students Against Sweatshops’ began pushing for an increase in pay for all workers, the chapter still does not have a set date or a clear path to a $15 minimum wage for students.

There is a possibility that some departments may be able to raise student worker minimum wages by July 1, Student Affairs Vice President Patty Perillo said.

Perillo and Senior Associate Vice President for Health & Well-Being Dr. Warren Kelley met with USAS, a student labor organization that advocates for all workers on the campus, on March 4.

Perillo said she would “regularly” stay in contact with USAS about the progress on wage increases by emailing the group every three to four weeks. Perillo also said she would update the USAS “immediately” if she has something substantive to offer.

“We will get to a $15 minimum student wage. We will. The question is the timing,” Perillo told The Diamondback. “There is a commitment from President [Darryll] Pines, Provost [Jennifer] Rice, myself and other vice presidents.”

While some departments such as Residential Facilities, the Department of Resident Life and Dining Services may take less than four months to get to a $15 minimum wage for all workers, other departments may take up to eight months, Perillo said in an email.

Perillo also said there is an inherent cost that the administration needs to cover if the minimum wage is raised. She cited higher student fees or reduction of services or programs, though she didn’t commit to either of those options.

“We’re exploring what is it that we can do to do this without much cost to students in terms of fees or in terms of reducing operations or programs,” Perillo said.

Sushanth Gupta, a co-chair of USAS’ student worker organizing committee, said Perillo’s inability to commit to a set date for a wage increase was “expected but still disappointing.”

“We want a real firm commitment, not just a vague range of dates,” the senior agricultural and resource economics major said. “It would mean a lot more if she was to say, ‘Look, you can hold us to this eight-month timeline. At that point, every single student worker is going to be earning at least $15 an hour.’ However, that wasn’t the case.”

USAS had been trying to secure a meeting with Perillo since December after it held a town hall to advocate for a $15 minimum wage, which Perillo said she could not attend due to a scheduling conflict at the time.

Now, some USAS members say the March 4 meeting was unproductive.

During the meeting, Alena Sergueev, a junior government and politics major, shared her experiences working in the South Campus Dining Hall last semester.

For instance, Sergueev mentioned that, in her experience, students don’t treat dining service workers with respect. She felt her concerns were dismissed and USAS members’ testimonies were being used against them.

“My point was that the job is difficult, and we should be compensated more,” Sergueev said.

In an email, Perillo wrote after hearing Sergueev’s story, she would follow up with Dining Services.

Perillo and Kelley said they felt the meeting with USAS was productive.

“It’s always helpful for Warren and me to hear student testimonials, student’s lived experience,” Perillo said. “There are several things that we took from those testimonials that both of us are going to follow up on.”

But Gupta agreed with Sergueev and said Perillo was deflecting from the larger issue, which is dehumanization in the workplace.

“[Dehumanization] can occur between students, but it’s also something that happens in an employee-employer relationship, especially when people are being treated really badly or being denied just working conditions,” Gupta said.

Sarah Moghaddam, a freshman psychology major and a community assistant at La Plata Hall, said she works eight-hour shifts, but she can’t eat at her desk despite the mask mandate being lifted.

Moghaddam also added that some of her coworkers have worked nine hours straight, as CAs aren’t allowed to get up from the lobby’s desk unless a coworker covers for them.
She said she’s lucky to have good coworkers, but getting someone to cover for you during night shifts can be difficult.

“There are just different nuances of the job that don’t get talked about, but collectively make it so that we deserve more than $12.50 an hour,” Moghaddam said.

During the meeting, Perillo stressed to USAS that she and the rest of the administration is on their side when it comes to raising wages. Gupta pushed back on that assertion.

“It’s kind of ironic to hear that we’re all on the same side,” Gupta said. “By necessity, you’re going to have an adversarial relationship with the administration because … if the administration was just doing what we want, then we wouldn’t exist.”