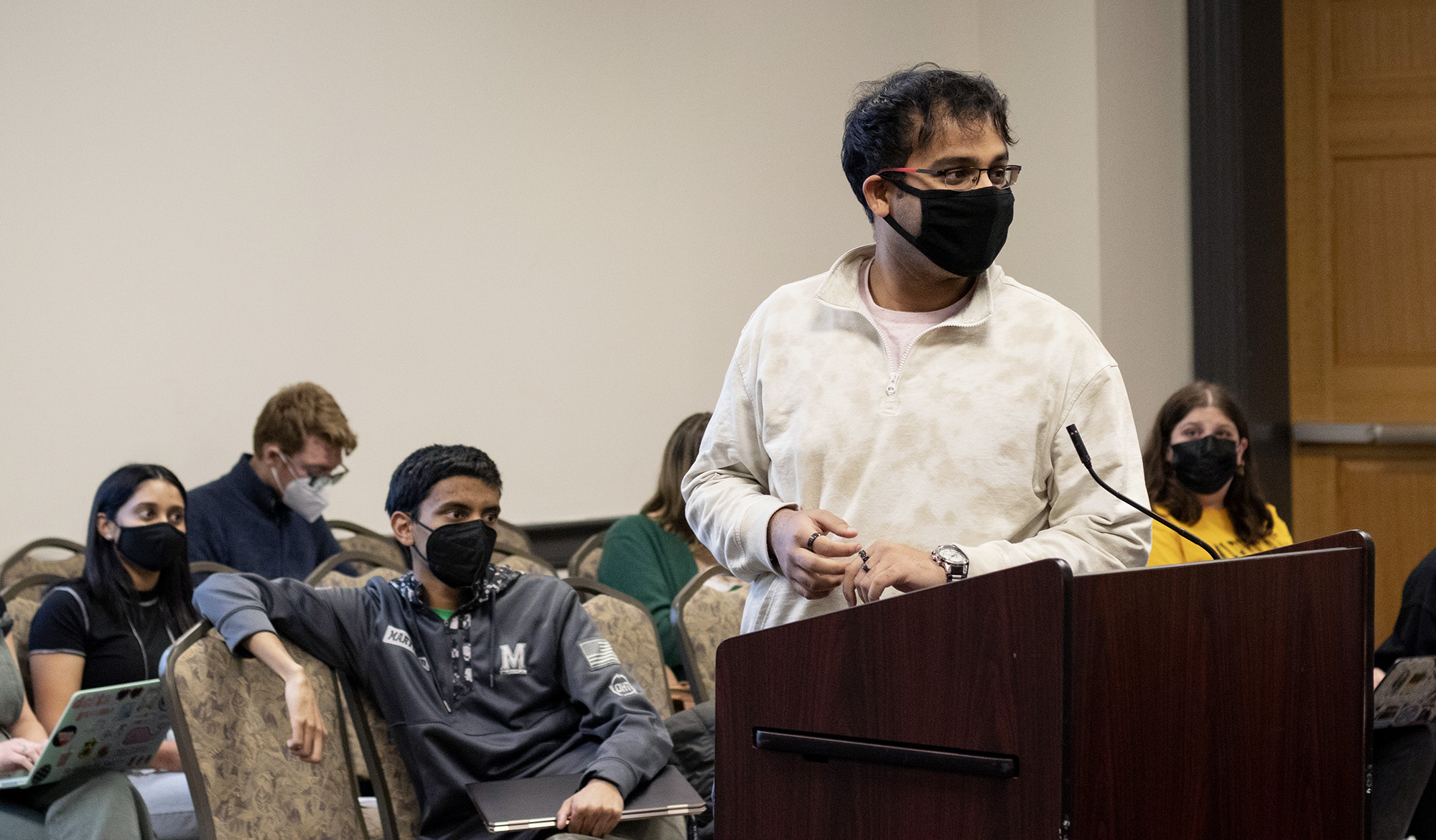 The meeting also marked the first time since early 2020 where some representatives did not wear masks, following university President Darryll Pines’ announcement lifting the indoor mask mandate in all places aside from classrooms, public transportation and the University Health Center.

The Student Government Association voted on four emergency bills, with one encouraging the university to raise student workers’ minimum wage from $12.50 to $15. Freshman Bethlehem Amdetsyon, the freshman connection representative, sponsored the bill.

A petition circling around the campus with over 1,200 signatures inspired the bill’s creation, according to the bill. Despite student demand for this change, SGA President Kislay Parashar and other legislators debated over the timeline of the wage increases.

Parashar, a senior computer engineering major, said the main reason he disagreed with the immediate change in wages is because a hike in students’ pay would simultaneously increase student fees, as the additional funding would originate there. Parashar argued for a gradual increase in student wages.

Michael Mareno, an arts and humanities representative, spoke in favor of the bill. He said the university fees always go up, but he has not seen a change in his wages.

“As a student at this university for four years, I believe fees have gone up regardless, and my wages have stayed the same,” Mareno, a senior English and government and politics major, said.

Mareno advocated for passing the bill now because $15 an hour may not be enough in the future due to changes in the economy, he said.

Parashar said if the SGA waits for the state to increase student workers’ minimum wage, there would not be a student fee increase. Conversely, he said if they did pass the bill, the fee increase would never go down, as is the policy at the university.

The public policy representative, Joshua Winston, said he would rather the money come from the university and not out of students’ pockets. But because this is a widely supported motion that students would rather a fee increase for a supported issue such as wages rather than a fee they have no control over.

“Despite us voting to recommend the university route, I still think symbolically we should vote for this bill because the student body is in favor of getting a $15 minimum wage,” Winston, a senior public policy major, said.

After the deliberation, the bill passed with 21 votes in favor, three votes against and six abstentions.

The SGA voted on a bill condemning the Department of Transportation Services for continuing to increase student fees, initially introduced at its Feb. 23 meeting. The bill passed with 28 votes in favor and one abstention.

Nicholas Marks, the education representative and sponsor of the bill, added an amendment to the bill changing the title from “condemn” to “discourage,” as he found the wording too aggressive.

“The rhetoric was a little too strong, I don’t want to completely condemn the department,” Marks, a freshman secondary education major, said.

The SGA also passed an emergency bill intended to support Ukrainian students on the campus by raising awareness on social media and providing donation links. The bill received 29 votes in favor and two abstentions.