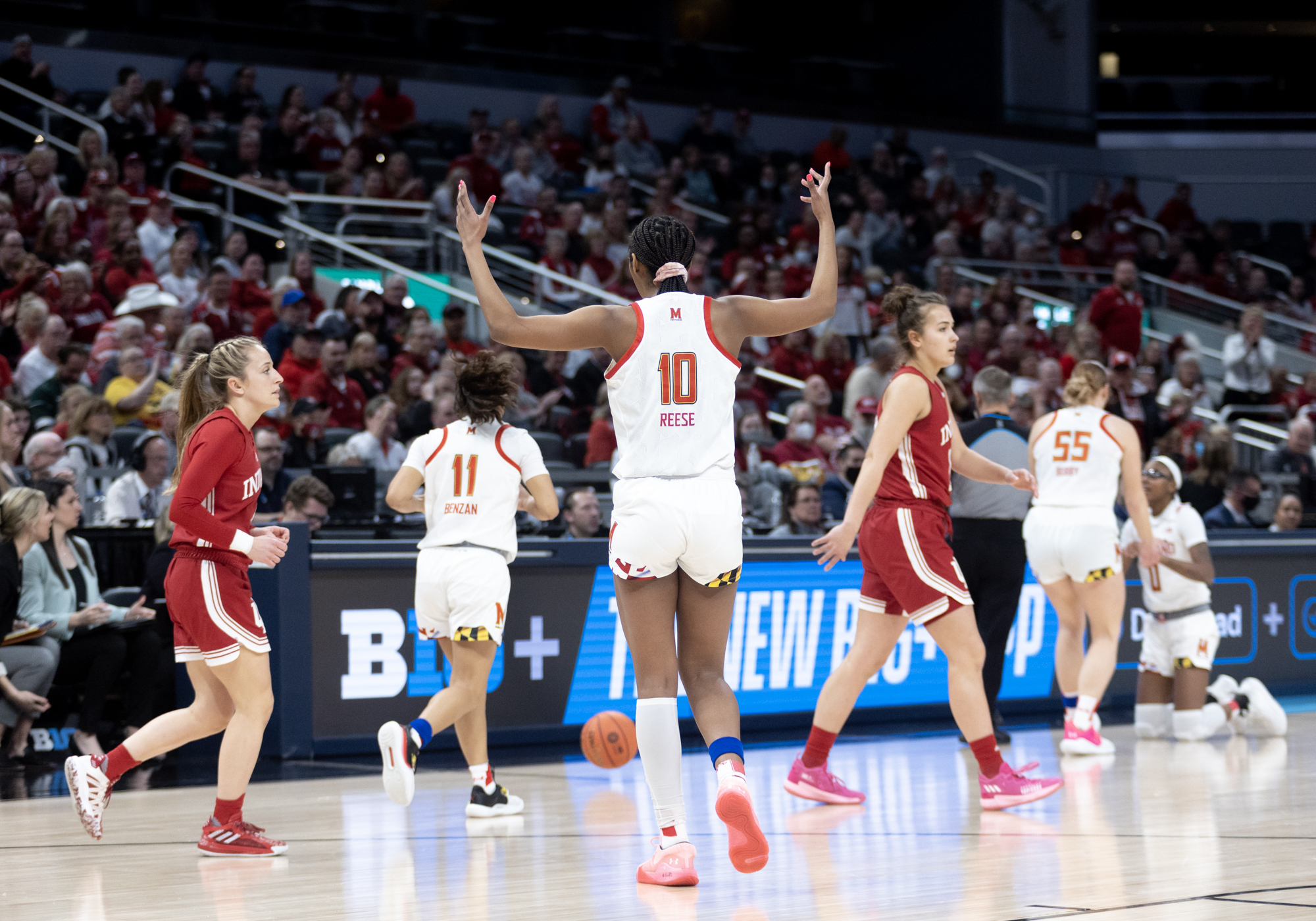 Maryland women’s basketball was left scratching its head following an early exit by the hands of the Indiana Hoosiers in the Big Ten tournament on Friday.

On the 12th and final three-point attempt for the Terps, Katie Benzan took a step-back corner three that hit nothing but the waiting hands of Grace Berger below the basket. It finalized a 0-for-12 showing from deep and put Maryland’s chances at obtaining a top-four seed in the NCAA Tournament in jeopardy.

“We have to punch fast today, and I thought Indiana smacked us in that area,” Chloe Bibby said. “Moving forward, there’s a lot of aspects that we can learn from. The season’s not over yet.”

The Terps were left staring down the barrel with a 62-51 loss. It marked the first time the program has missed the Big Ten tournament final since joining the conference eight years ago.

“This is a special year for the Big Ten in terms of the talent level,” Hoosiers coach Teri Moren said. “There’s a team here in the Big Ten, and I don’t know who it is, that could easily win the Final Four.”

Upon arriving in Indianapolis, the NCAA Tournament committee slotted Maryland in at the 12th overall seed. With the Terps’ early departure, however, that seeding seemed destined to drop.

As March typically brings, chaos ensued across the country.

With Iowa and Indiana advancing to the Big Ten championship, the Hawkeyes and Hoosiers will likely leapfrog the Terps upon Selection Sunday. But the rest of the teams looking to usurp coach Brenda Frese’s squad from the top-16 encountered the dark side of March.

The day following Maryland’s loss, all of Virginia Tech, Oregon and Notre Dame lost. Those three teams were on the cusp of moving up a seed line, but their respective semifinal departures all but likely deterred any shift.

Additionally in the Pac-12, Arizona suffered a premature exit by the hands of bubble team Colorado, 45-43. While the Wildcats had a leg up on the Terps as the No. 11 overall seed in the latest top-16 reveal, they suffered a more consequential loss, possibly allowing Maryland to jump them and move further away from the five-seed line.

A sleeper team to usurp Maryland in the top-16 was BYU, who had two losses to its name on the season. However, Gonzaga upset the Cougars in the WCC Tournament final on Tuesday, putting an end to the mid-major’s rise to the four-line.

Despite all of this parity, there was none more impactful of a run than Miami’s in the ACC Tournament.

Although the Hurricanes couldn’t capture the ACC Tournament championship — losing to NC State on Sunday — the damage had been done.

As the seven-seed in the tournament, Miami played itself into the field by pulling off victories against Duke, three-loss Louisville and potential four-seed thief Notre Dame. The latter gave Maryland the most to cheer for, but the run as a whole garnered an unlikely quality win for the Terps.

On Dec. 2, Maryland defeated Miami, 82-74, in a hard-fought rendition of the Big Ten/ACC Challenge. Miami was a bonafide bubble team throughout the year, but its run to the ACC final locked in its spot in the Big Dance while simultaneously giving Maryland an additional boost to its tournament resume.

As it stands, Maryland is joined on the four-line by Arizona, Indiana and Oklahoma, according to ESPN’s Charlie Creme’s latest Bracketology. The Sooners have still yet to play in the Big 12 Tournament, which starts on March 10, but did lose its regular season finale to Kansas, 73-67.

Additionally, Creme has Ohio State situated as a six-seed. As the No. 1 seed in the Big Ten tournament, the Buckeyes failed to threaten Maryland’s positioning as they lost to Indiana the day following the Terps’ quarterfinal loss.

Its body of work across the season combined with the fortunate results in other conference tournaments figures to have staved off any threat to Maryland’s status as a top-16 team in March.

“When you look at our strength of schedule … you look at the nonconference schedule we put together, [our] conference record,” coach Brenda Frese said. “We’re excited about the run that we can possibly make in the NCAA Tournament with a really healthy team.”

CORRECTION: A previous version of this story misstated when the Big 12 women’s basketball tournament begins. It begins March 10. This story has been updated.