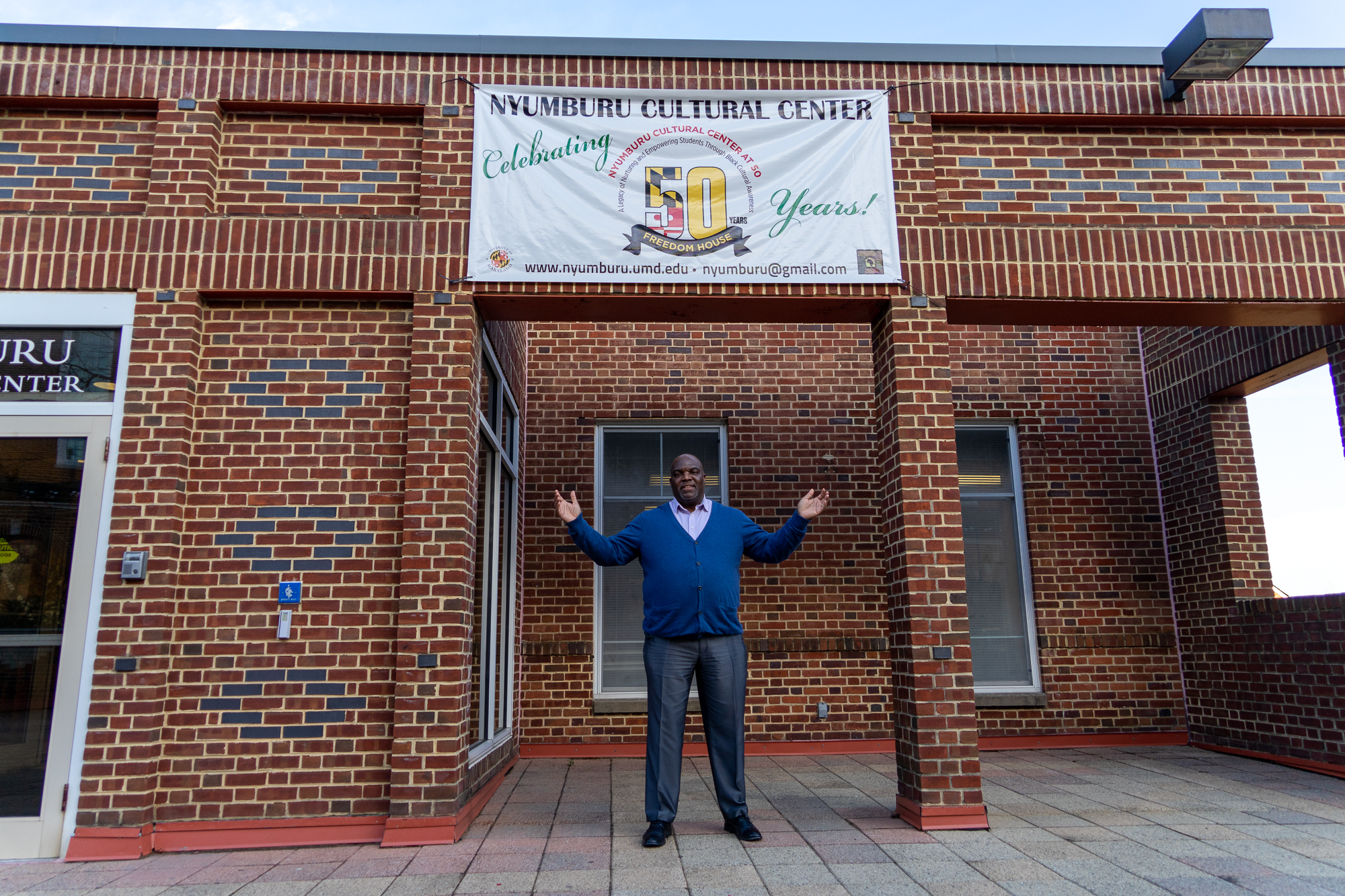 Andre Nottingham, Assistant Director of Development & advancement at the Nyumburu Cultural Center, on Feb 23, 2022. Nottingham is running for a position on the Maryland House of Delegates. (Freddy Wolfe/The Diamondback)

As an educator and father of two, the University of Maryland’s assistant director of program development and advancement at the Nyumburu Cultural Center, André Nottingham is always thinking about how he can improve the lives and education of young people.

That mindset is what led Nottingham to run as a Democrat to represent District 26 in the Maryland House of Delegates, and it’s one of the foundations of his campaign.

“My thing is this — trying to make sure that we’re preparing young people for their life,” Nottingham said. “I’ve worked in higher ed[ucation]  for 28 years now, and I’ve been heavily involved in local issues.”

District 26 is in the southwestern portion of Prince George’s County, which contains Fort Washington. Six candidates, including Nottingham, are running to fill three contested seats. Nottingham is running as a team with candidate Angela Jones and incumbent delegate Veronica Turner. The trio will be sending out joint mailers, and he hopes they get elected together to serve the district.

But before Nottingham moved to Prince George’s County with his wife in 1994, he grew up in Rockland County, New York. His background as a lower income, first generation college student influences his perspective on the need to “pay it forward” to young people, he said.

“I put myself in young people’s shoes now, of experiences and opportunities that I wish I would have the opportunity to be exposed to,” Nottingham said.

So, Nottingham became a member of the Parent Teacher Student Association throughout his kids’ time enrolled in Prince George’s County public schools. In 2013, Nottingham co-founded the nonprofit Alliance for Innovation in Education. The nonprofit’s aim is to help Prince George’s County students aged 12 to 25 with academics, job training, healthy habits, entrepreneurship and financial literacy.

Nottingham, who now has experience as a licensed financial service representative, didn’t have access to financial literacy courses when he was in school. But he sought to change that with a virtual financial literacy workshop as part of his nonprofit’s programming.

Five college mentors from the business school worked with 28 middle and high school students to cover topics such as insurance, retirement, investments and pensions.

Nottingham delighted in just how eager the students were to learn more about finances.

“Just imagine middle schoolers and high schoolers sitting there engaged talking about this,” Nottingham said. “Seeing them after and during the sessions asking these analytical questions about these topical areas, you just sit there like, ‘Wow, this is powerful.’”

Nottingham also said he wants to address the lack of downtown employment centers near Metro stations in Prince George’s County. According to the county’s planning department, “within one-half mile of the county’s Metrorail stations are over 2,500 acres of undeveloped land.”

“We need to grow our business sectors around our transportation infrastructure that we have in place already,” Nottingham said. “And this is unlike any other jurisdiction.”

In addition to his focus on education, Nottingham wants to make Maryland’s roads safer, particularly Maryland Route 210, due to multiple fatalities over the last 11 years.

Anderson met Nottingham through Nyumburu’s virtual news breaks, where students would discuss politics, civic engagement and many other topics. Once campus was back to an in-person environment, Anderson and Nottingham would regularly talk about internships, investing, and what was going on in one another’s lives. He became not only a mentor, but a great friend to Anderson.

Anderson said she was “ecstatic” when she heard Nottingham was running, and she plans to volunteer for his campaign.

“A while ago, I told a family friend that my dream was to work on a political campaign at some point. And, lo and behold, it’s happening,” Anderson said.

Comissiong called Nottingham “principled” and he supports his candidacy. Comissiong stressed that while he supports Nottingham as an individual, he doesn’t speak for the Nyumburu Cultural Center. Nottingham also made clear that he doesn’t seek an endorsement from Nyumburu and that his professional role at the university is entirely separate from his run for office.

“He truly cares about the development of the county and especially ensuring that historically marginalized communities such as African American communities get the attention that they need,” Comissiong said.

“I think he has an excellent chance. And I have every reason to believe that he will get elected,” Patterson said.