Bottom of the lineup drives Maryland baseball past Delaware, 14-4 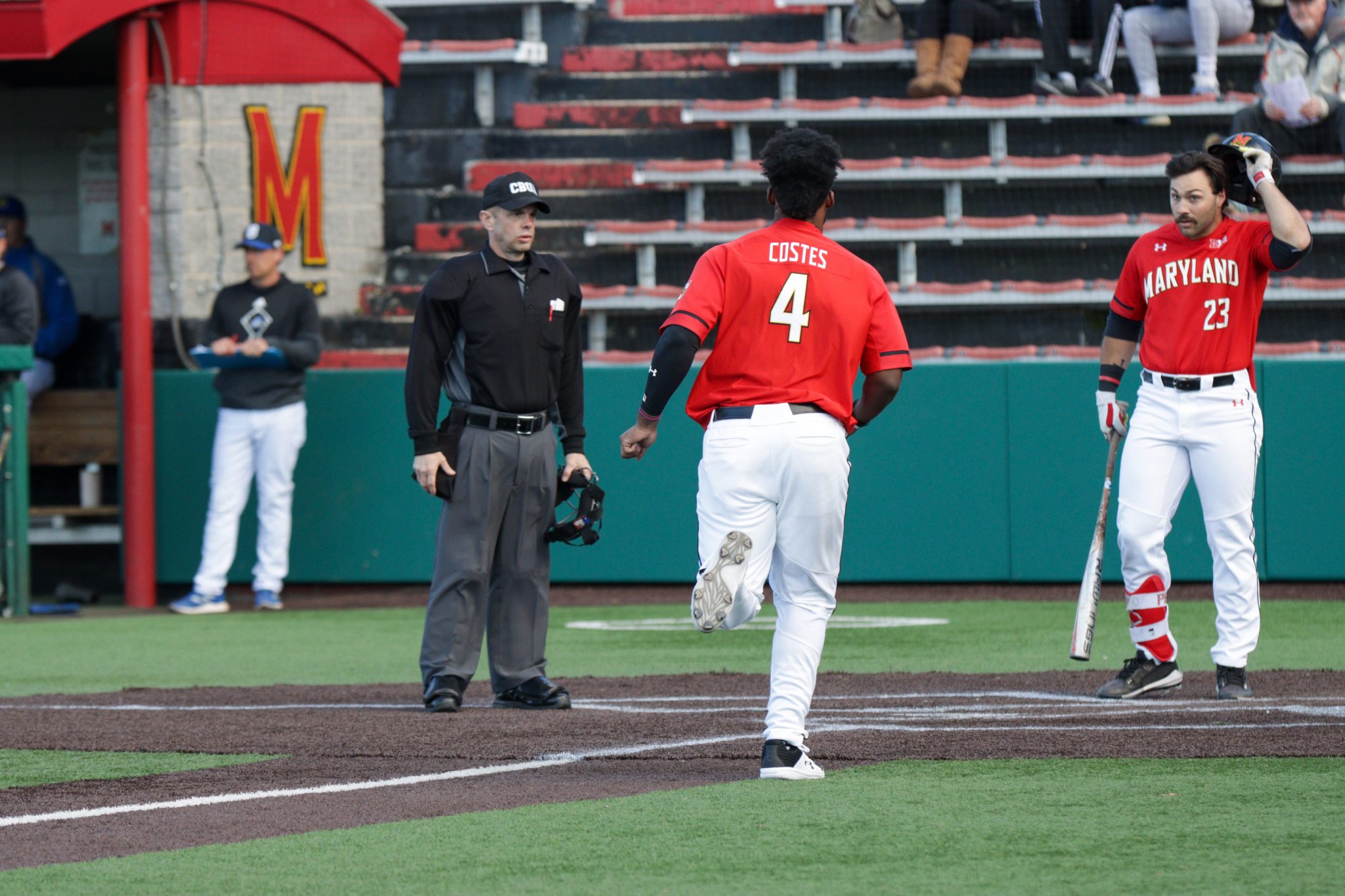 Delaware traded punches with the Terps all game. Competition flowed across the field through each inning, but then it came time.

One hit after another, Maryland pulled away. The streak continued.

Advancing to 8-0 by capitalizing on contributions all the way down its batting lineup, Maryland baseball walloped the Delaware Blue Hens, 14-4.

Maryland baseball looked to Logan Ott to start another midweek game as the utility player continues to settle into a routine spot. Unlike the Terps’ last midweek game against UMBC, they wouldn’t wait long to land on the scoreboard.

Cracking a rolling RBI single to right, Maxwell Costes ignited a rally in the second to start Maryland off on the scoreboard. A miscue on third scored Bobby Zmarzlak in the same sequence.

Then, Troy Schreffler stepped in the batter’s box.

Taking a hard swing, Schreffler smashed the pitch into center and over the wall to add an early exclamation point. The junior led the team in hits with four on the day, and three RBIs. After an uneventful start, the Terps seemed like they may roll over their northern opponent.

“I thought Troy Schreffler was awesome today,” Vaughn said. “He’s been really good this spring but he’s just really professional. He hits the homer early but understands who he is.”

As the Blue Hens’ Dom Velasquez was replaced on the mound and Ott started tiring with the innings, that dream sank.

Attacking Ott with small-ball singles throughout, Delaware put runners on base in the third inning until they couldn’t be held back from home anymore. Grabbing a RBI groundout before Ott punched out a batter, the Blue Hens looked to wear Maryland down.

“I think it’s just continuing to build [Ott] up,” Vaughn said. “…I just need a good start. I need two or three innings to give our offense a chance to do some stuff.”

But RBI slaps in the next two innings would reestablish the Terps with a 6-1 lead before Delaware would land their own strikes.

Taking advantage of a worn Ott, the Blue Hens managed a two-RBI single to evacuate Ott from the mound in quick fashion. Will Glock would end the inning as Delaware drew closer.

Unexpected contributors would crack the contest wide open for Maryland.

In his first-ever plate appearance, Jacob Orr would flip the game on its head. Rocketing a high ball to deep-left field, the freshman drove home a pair of crucial runs as his teammates went wild.

“He just puts the ball in play,” Schreffler said. “Kid doesn’t strike out. He hits the ball hard and for him to come in, first college [at-bat], hit a two-run double, that’s awesome.”

With Nick Lorusso and Andrew Johnson closing the game on the mound and with help from a crushed Costes homer, Maryland left no doubt. The Terps would pile on 14 runs as Delaware reached into their bullpen to no avail.

“I texted our hitters this morning and I said we’ve competed really hard, we’ve done our job offensively,” Vaughn said. “…it’s time for the offense to go out and win one.”