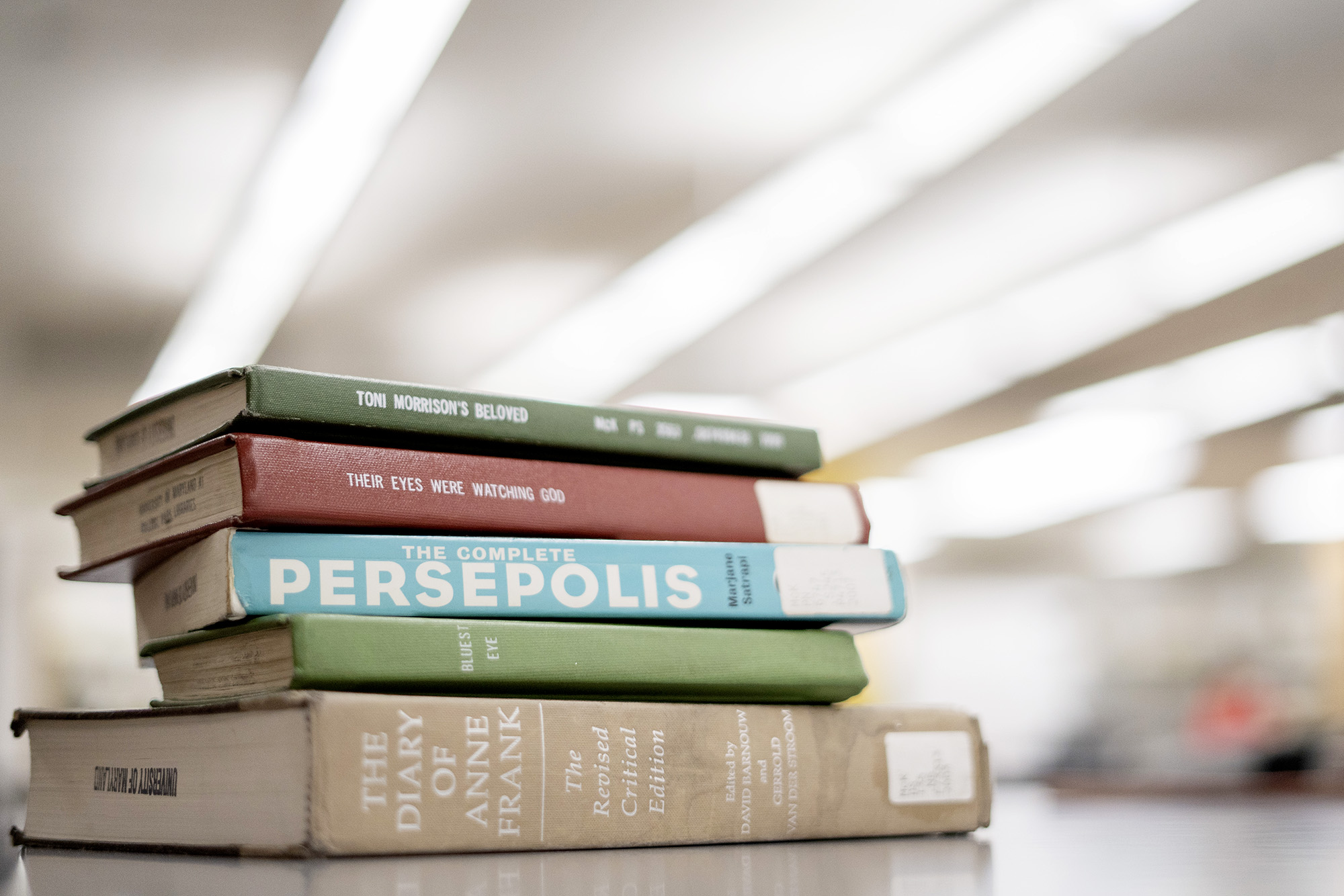 Beloved, Their Eyes Were Watching God, Persepolis, Bluest Eye and The Diary of Anne Frank are all banned in states across the U.S. (Taneen Momeni/The Diamondback)

Students and faculty at the University of Maryland shared concerns over a recent wave of school districts across the country trying to remove books about racism, anti-semitism, discrimination against Indigeneous people, sexuality and gender identity from their curriculums.

Proponents of these bans say the books teach divisive topics.

Many books across the nation were censored for teaching critical race theory, the academic concept that centers on the intersectionality of race and law with the idea that racism is embedded in legal systems and policies.

Tahirah Akbar-Williams, the librarian for this university’s schools of education and African American studies, said critics of critical race theory often do not understand what it is.

Learning about racism early is important so kids will be better able to understand it in college and in life, said Akbar-Williams.

The need for books discussing topics such as racism is especially important because it can have real life consequences, said Akbar-Williams. This university also has a sad history with the deaths of 1st Lt. Richard Collins III and Jordan McNair, she said.

“This campus is particularly in a very interesting position,” Akbar-Williams said. ”And so we need to talk about race everywhere, but particularly on this campus because you had the violence against black bodies.”

Books regarding of Jewish communities and experience have also faced bans. Graphic novel “Maus” by Art Spiegelman made headlines when a Tennessee school district banned it in January. The autobiographical book depicts the horrors of the Holocaust through Spiegelman interviewing his father.

The McMinn County School Board unanimously voted to ban “Maus” for “rough” language and a nude drawing of a woman,” according to school board meeting minutes reviewed by The Tennessean, a local publication.

Marsha Rozenblit, a professor of Jewish history at this university criticized the ban of “Maus.” She teaches a class about the Holocaust and said she was not sure what the parents were objecting to.

“The Holocaust is tragic and unpleasant, but it is a fact. And it is something that is good for people to learn about,”Rozenblit said.

Shannon Neal, a first-year English graduate student said the “shocking” thing about “Maus” is that it was fully banned instead of challenged first. Most book challenges are overturned, according to them.

Neal said the bans did not surprise them, but the fact they were happening at all left them deeply disappointed”.

“I think there’s been a lot of expressions of shock that are more expressions of how bad it is, not so much surprise because I think we all feel the political atmosphere right now,” said the graduate student.

Neal researched banned books for this year’s March Book Madness, an annual event hosted by the English department at this university to “spread awareness of topics in literature.”

This year’s theme is “censored books.” It features a bracket of books that have been censored at some point in time.

“The goal of this year’s March Book Madness bracket is to showcase the embeddedness of controversy over the ideas presented in books,” according to the English department website.

Some of the books included were challenged this year such as “The Bluest Eye” by Toni Morrison — a story of a young Black girl who struggles with her identity in a predominantly white society — and “Grapes of Wrath” John Steinback’s tale of tenant farmers struggling to find work during the Great Depression.

Neal, who works as a graduate assistant at the university’s Center for Literary and Comparative Studies said they were worried about the volume of recent book censorship and where the country was headed.

This is especially true since the censorship of books surrounding sensitive topics could be very detrimental to student learning, said Neal.

“It’s just very limiting to students. Having [these books] off the library shelves means you can’t just discover it,” said Neal. “And it also just creates this atmosphere of taboo, which doesn’t help with academic freedom or learning.”