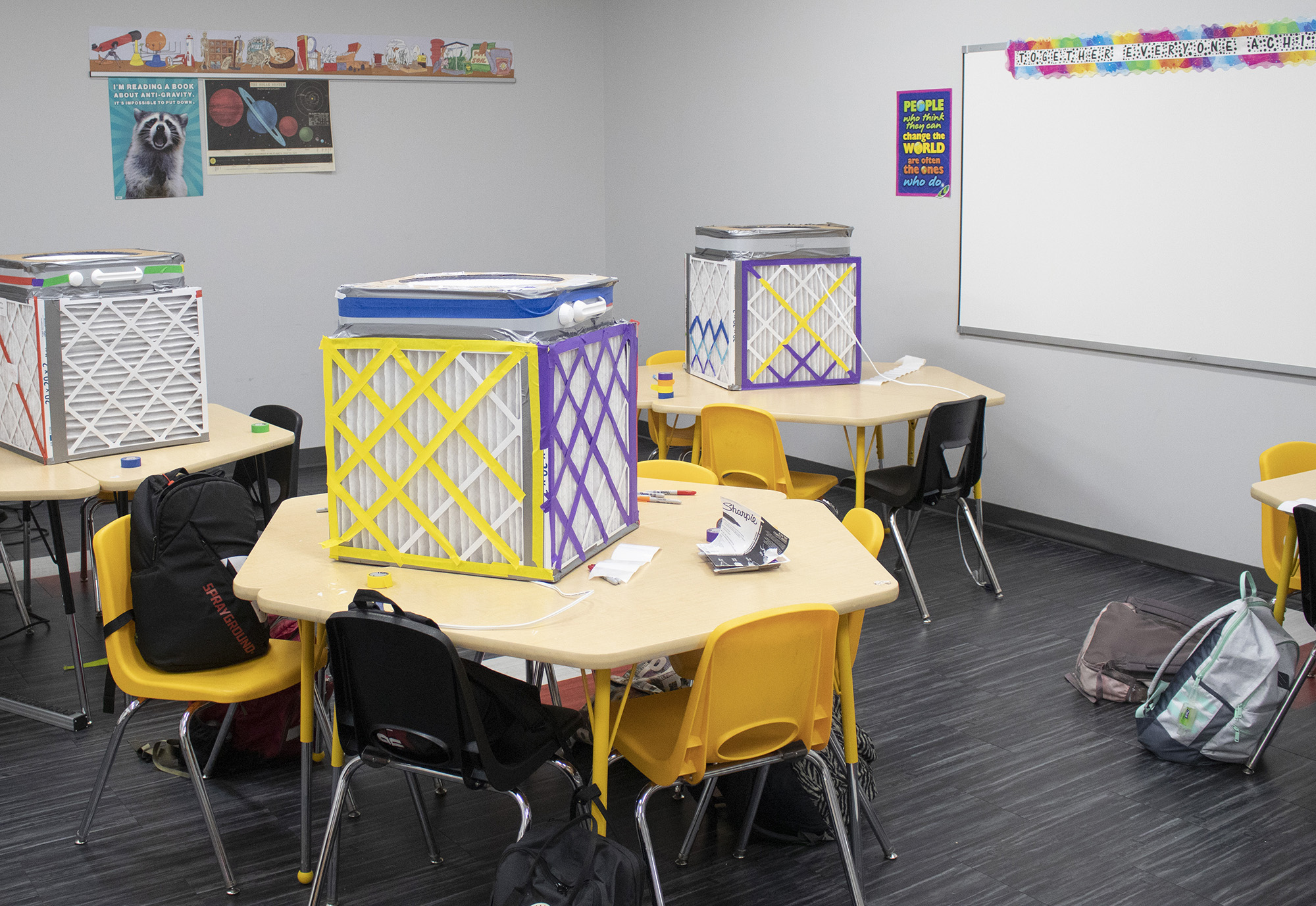 University of Maryland faculty and students are building and distributing cost-effective air filtration devices throughout the College Park area.

Since the beginning of February, students and faculty in the public health school have been making Corsi-Rosenthal boxes. The devices are box fans doctored up with cardboard, five furnace filters and “a lot of duct tape.” It comes together to improve indoor air quality and ventilation, said Kate McPhaul, an associate research professor in the Maryland Institute for Applied Environmental Health who built Corsi-Rosenthal boxes with her students.

The idea to build Corsi-Rosenthal boxes at this university came from Dr. Donald Milton, a professor of environmental health at this university and expert in aerobiology of respiratory viruses, who used funding and resources from his recent MPowering the State award to build these boxes, McPhaul said.

“He’s anxious, I think, to make sure that the research that we do is also very applicable to the populations that we’re studying and that we serve,” McPhaul said.

McPhaul said Milton has bought fans, furnace filters and duct tape in bulk, bringing down the price to build the boxes down to about $60. She said buying the materials for just one box comes out to about $100.

Though the cost to build a Corsi-Rosenthal box is significantly less than what it might cost to buy a ventilation system or filter, McPhaul said, “We didn’t want this to be just only [for] people who could afford the materials … for some people, $100 is going to be too much to buy their own materials.”

That’s where Dr. Stephen B. Thomas, a professor of health policy and management in the public health school, comes in.

Thomas teaches a class focusing on redesigning health care around community needs. He brought his class together to build the boxes, and as teams, create infographics explaining the importance of the boxes.

His class plans to distribute the boxes to community partners such as schools, churches, barbershops, beauty salons and funeral homes, Thomas said.

“We need to show more acts of kindness. That’s what this is about,” Thomas said, “It’s science, but it’s also about humility.”

On Friday, Thomas’ class traveled to the College Park Academy, a charter middle and high school that is a joint collaboration with this university — and where Thomas is also a board member — to beautify the Corsi-Rosenthal boxes before they are distributed over the coming weeks.

Thomas wanted the students to “make [the boxes] less industrial and make them fun. Turn something that is very instrumental into something that’s art.”

Along with middle schoolers, Thomas’ class used tape, markers, stickers and more to create designs ranging from themes of clean air, a mix of aquatic animals and Black historical figures, pride and inclusivity and even the elements of nature, which consisted of fire, water and goo.

“It’s just a very colorful box. Before … it was just tape. Tape all around. At least now there’s some light to it, and it’s prettier to look at,” said Sreya Bommaraju, a senior public health science major at the event. “You can see how [the kids] put their heart into it.”

For Murielle Tembunde, a senior public health science major who helped some middle schoolers create designs incorporating air pollution, the overall experience was rewarding in more ways than one.

“It felt very rewarding building [the boxes] up and like, now seeing them decorated just feels amazing,” Tembunde said.

Matthew Mathai, who worked with another group of middle schoolers to design element-related drawings, said the experience allowed him to teach the younger students about community health.

“Anything regarding air pollution, especially something that’s easy that kids can build and put in their homes at such a young age, is awesome,” said Mathai, a senior physiology and neurobiology major.

Some boxes will remain in common spaces of the school, accompanied by infographics designed by Thomas’ students and a scannable QR code to help the College Park Academy community learn about the boxes, Thomas said.

“[Students are] really in touch with a lot of the current events that are going on in the world and they have a lot of great ideas,” said Steven Baker, College Park Academy’s middle school principal. “They’re the next leaders, right? So it’s our job to nurture that and make sure that they understand that their voice needs to be heard on all these important topics.”

The other boxes will be distributed to community members and businesses in the Lakeland community and College Park area over the next few weeks, Thomas said.

“We’re showing [that] in the midst of a pandemic, yes, there’ve been setbacks, but there’s also been opportunities to reimagine ourselves and what’s important,” Thomas said. “Bottom line is this: Creativity matters. Science matters.”