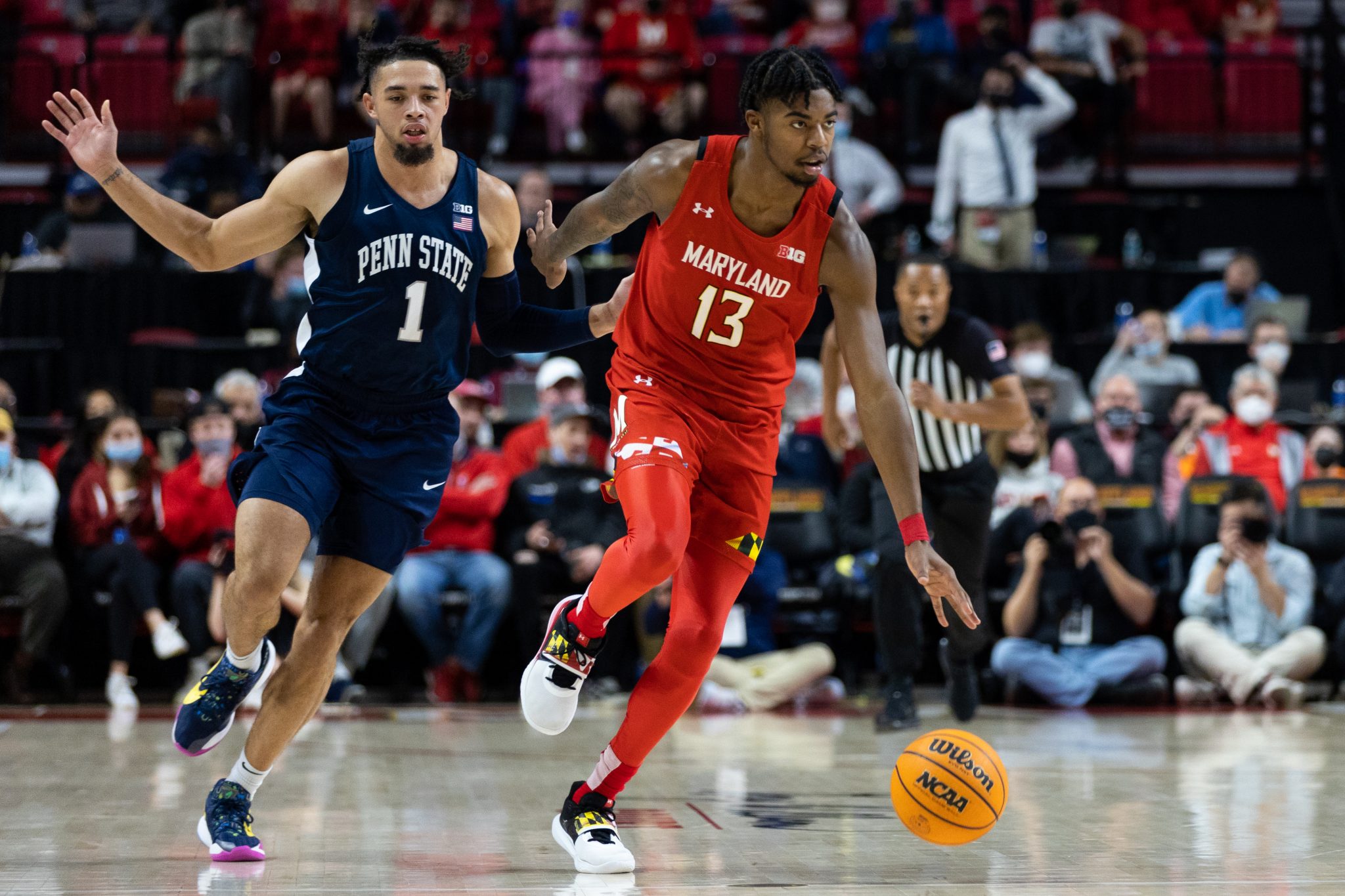 As the clock wound down the final seconds of the first half, Ian Martinez kept close guard of Sam Sessoms in the backcourt.

Maryland men’s basketball knows the pain of entering halftime at a deficit all too well, but Martinez didn’t let that happen.

The guard punched the ball away from Sessoms and charged down the court only hesitating for a second to allow his defender to pass him, setting up an open layup.

The Terps (13-14) went into the second half with new life and made quick work of Penn State (11-13). They pulled ahead in the first five minutes and finished out an energetic 67-61 victory in front of a sea of red.

“Really really enjoyed the energy that we would feed off from our student section in the red t-shirts,” interim head coach Danny Manning said. “That was big for us.”

Tied at 28, the Terps had the chance to begin again in the second half with a shot at back-to-back wins after a lengthy losing streak.

The fresh start may have been just what Maryland needed. The opening moments of the second period saw Penn State make a trio of clean shots from the paint, but proceedings quickly went in the Terps’ favor.

Back in the game, Fatts Russell found pay dirt with three quick layups of his own.

Soon after, it began to rain in College Park.

Eric Ayala connected on his second three-pointer of the game, Russell was next with a long make. And just when the Nittany Lions appeared primed for a response, Ayala snatched a pass meant for John Harrar.

The senior guard calmly approached his attacking end and popped a three-pointer that sank, extending Maryland’s lead to a then-game-high of seven.

“It’s kind of what I do,” Ayala said of his hot streak.

Things only got better for the Terps, going on a 9-3 run with makes from Ayala, Martinez and Hakim Hart.

Martinez and Hart were a pain all night long for Penn State, combining for eight steals. Maryland managed a 13-point lead deep in the second half before the Nittany Lions made up ground.

“The focus was just to stick together and…make the court smaller,” Donta Scott said. “Keep our heads up, get deflections and that’s what the guys did today.”

Penn State chained makes from Harrar and Jalen Pickett to pull within six in the final minute. Scott and Russell had the chance to seal the game with free throws, but both faltered missing one apiece.

A clutch three from Sessoms closed the gap to four. However, Russell wasn’t going to waste his chance to call game. Russell sank seven free throws in the final 40 seconds to seal the game.

Qudus Wahab controlled the opening minutes of the game, scoring seven points before the first timeout. Although the big-man has had some troubles with dominating the paint against Big Ten foes, Wahab met the challenge Monday.

Wahab notched two early makes, first a feed from Russell that he emphatically jammed into the basket. On the next possession came another setup from the guard that let Wahab finish from beneath the rim.

“It’s always a good feeling when you get assists,” Russell said. “That’s kind of what I pride myself on, getting joy for my teammates, seeing other people happy.”

Russell struggled through the first half, racking up two quick fouls and missing all three of his shot attempts. However, one careened off the rim in the perfect spot for Wahab to grab the ball for a putback slam.

A trio of baskets from Scott helped Maryland build a six-point lead with just under 12 minutes to go in a productive beginning to the opening half. But with lineup adjustments came a shift.

As Ayala — who found himself out of the starting five for the third consecutive game due to a wrist injury — Martinez and Julian Reese entered the fray, the Terps slowed down.

The Nittany Lions began connecting after going two for their first eight. Harrar found success in the paint and Pickett, without the burden of Russell defending him, notched a pair of long jump shots.

On the offensive end, Maryland went cold with the exception of three fortunate makes from beyond the arc courtesy of Hart, Reese and Ayala.

But, another lineup change caused the Terps’ offense to struggle in a treacherous Big Ten contest.

Down four in the final three minutes of the opening period, Maryland needed a reaction. A well-worked floater in the paint from Scott pulled the Terps close. Martinez’s tying basket provided a spark after a dire final 10 minutes of play in the opening half.

Maryland earned a key victory in its quest to salvage its season with a collective effort, one that earned the Terps back-to-back wins for the first time since January.

Russell led all scorers with 18 points, while Ayala managed 13 — his highest total in the last four games.