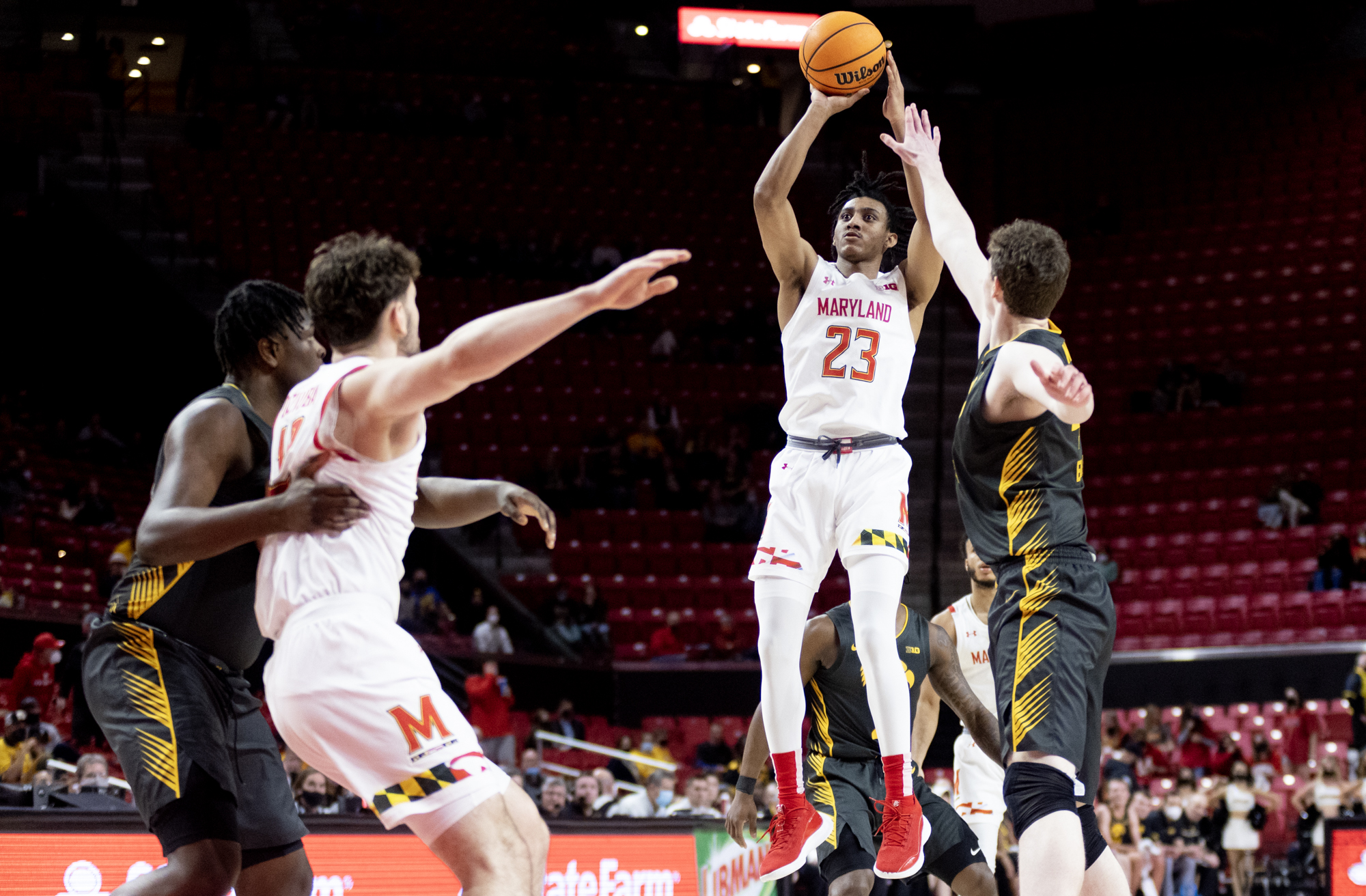 Maryland men’s basketball was pressuring Nebraska behind the three-point line. The Cornhuskers were down, 68-54 — and they needed a big move to get back into the game.

Trey McGowens had the ball behind the arc with Xavier Green and Donta Scott in his way of taking it in. McGowens’ only option was a pass to his right to Kobe Webster, who was also out wide.

But Ian Martinez wasn’t having it.

Martinez sprinted up and knocked McGowens’ pass out of the air. When he caught up with the ball, he was alone, well on his way to Nebraska’s hoop.

He saw his opportunity and took it. Martinez jumped — he was eye-level with the rim. He wound his arm back and over his head and he slammed the basketball through the hoop.

When Martinez hit the ground, he was greeted with cheers from his teammates on the bench and a 16-point lead for his team.

“I’ve done it before, but right now, it really feels good,” Martinez said of his dunk. “I haven’t really done those kinds of stuff during the season so it definitely feels really good to get one and hopefully I’ll be able to keep getting more.”

Despite not getting much playing time in Maryland’s conference games, the rise and triumphant dunk of Martinez are a sign of the Terps’ progress in their last two matches.

Maryland pulled off something similar for a stretch in Lincoln, Nebraska. Bryce McGowens — the six-time Big Ten Freshman of the Week — scored just 11 points in the first half. Seven of those points came from the free-throw line.

McGowens finished the game with just 11 points from the field. But the Terps got into some foul trouble and he sank 14 of his 15 free throw attempts on the game.

Even with his high number of trips to the line, Daron “Fatts” Russell was just two points away from tying McGowens as the game-high scorer with 23 points of his own.

“That’s what Maryland basketball is. We defend at a high level,” Russell said. “We felt like we did that Purdue game, for the most part, and we did this in this game as well, but we just fouled too much, I feel like, in this game.”

Despite the high number of fouls committed by both teams — 64 total free throws were taken in the matchup — the Terps’ offense fired on all cylinders and put up a quality shooting performance.

Maryland shot about 53 percent from the field, a metric boosted by their 59 percent success rate in the second half. While the Terps’ three-point shooting was poor throughout the game, they didn’t need baskets from deep to pull off a win against the Cornhuskers.

Maryland also finished the game with a shockingly low number of turnovers registered. The Terps gave the ball away just four times, a metric by which Manning was surprised, given Nebraska’s proclivity for forcing turnovers.

[Maryland men’s basketball has been productive during extended break]

Maryland’s improvement over recent games has been palpable. But so is the pressure building for Manning’s squad.

Only three teams in Division I college basketball have registered 28 or more winning seasons in a row. The Terps are one of those three teams. And they’re running out of time to maintain that record.

With five games left in the regular season, Maryland has to beat four of its next opponents to keep its winning-season record going. And the looming Big Ten tournament is another nagging reason for the Terps to try to win out the rest of the season.

Penn State, a team that sits on the low end of the Big Ten standings just two spots above Maryland, is coming to College Park for a faceoff on Monday. With the momentum the Terps have built and the Nittany Lions’ lower standing, Maryland’s optimism for back-to-back victories lies in its defensive performance.

“We have to stay in front of the basketball and we have to contest the ball and that’s going to be a tough challenge for us against Penn State,” Manning said. “For us, the simple formula is defend and rebound.”