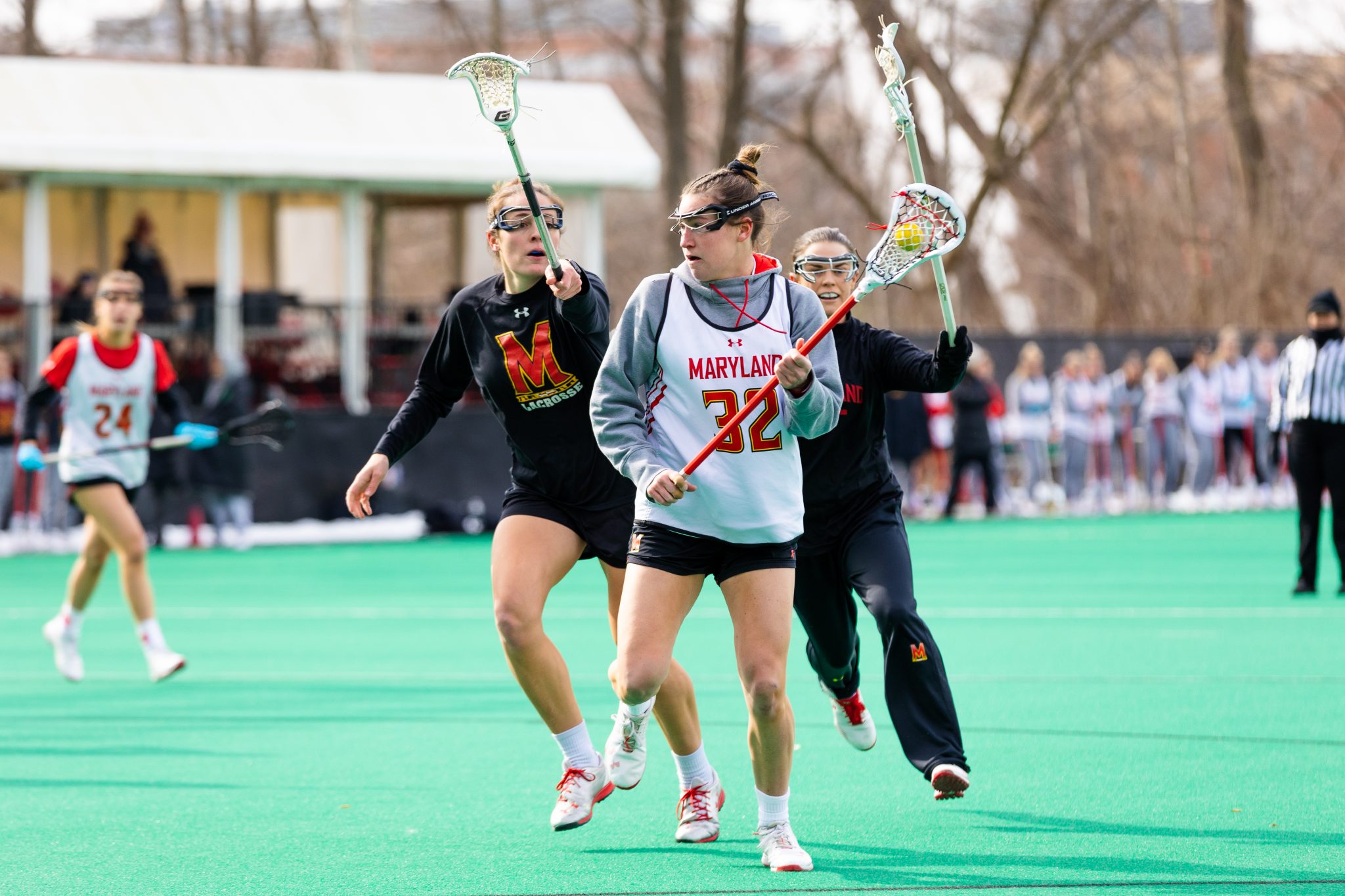 Aurora Cordingley dashed out from behind St. Joseph’s goal and whipped the ball into the upper corner for her first goal as a Terp. The Johns Hopkins transfer would go on to score four of her five goals the same way, becoming a hazard to the Hawks’ defense all afternoon long.

Maryland women’s lacrosse opened its 2022 season against St. Joseph’s and showed off its offensive excellence, beating the Hawks, 20-6.

Shaylan Ahearn lobbed the ball into the goal for the first goal of the Terps’ season with an assist from Shannon Smith. Less than a minute later, attacker Aurora Cordingley followed suit with another goal.

Maryland continued its early dominance with another goal from attacker Hannah Leubecker.

The Hawks attempted to respond to the Terps’ aggressive offense, but they couldn’t make it past Maryland’s defense or get a clear shot at the goal.

Cordingley scored her second goal of the day in the same way as her first — coming in quick for behind the goal to launch the ball in, making the score 4-0.

After a timeout, St. Joseph’s got its groove back. The Hawks scored two goals in under two minutes, but Cordingley picked up a hat trick in the first quarter to keep the Terps’ momentum alive.

Maryland brought the heat in the beginning of the second quarter. Attacker Kate Sites scored the first goal of the quarter, followed shortly by a goal from attacker Victoria Hensh.

“The second quarter, I thought we did a nice job of moving the ball on offense, generating good looks,” coach Cathy Reese said.

[After an unfortunate 2021 season, Maryland women’s lacrosse looks for a comeback]

In what quickly became her signature move of the game, Cordingley advanced from behind the goal to chuck the ball into the net.

Attacker Libby May brought Maryland’s lead up to seven with her first goal of the game. The Terps continued to control the game with another goal by Cordingley assisted by Eloise Clevenger, which brought the score to 10-2.

Even when the Terps weren’t scoring, they controlled the rhythm of the game.

Sites scored her second goal of the game, her first goals since 2020 after she missed last season due to injury.

“I’m just so excited to be back out there,” Sites said. “I was definitely a little nervous at first but after the first few minutes like I was totally comfortable.”

The Hawks scored their first goal of the quarter after playing for over 12 minutes, but it wasn’t enough to shift the game’s momentum.

Maryland slowed the game down at the end of the second, drawing out their offensive moves. May scored her second goal of the game to end the first half with the Terps up, 12-3.

“It’s so easy to play with everyone here, everyone’s just so smart,” Cordingley said. “We don’t care who scores, we just want to score and that’s Maryland lacrosse.”

There was potential for trouble when the Terps received yellow cards on Libby May and Maddie Sanchez. But Maryland kept its cool under pressure — freshman midfielder Jordyn Lipkin scored her first goal when the Terps were still down a player.

“[I’m] really proud of their execution,” Reese said. “I think we showed moments where we had great composure and that was one of them.”

Co-captain Grace Griffin scored, bringing the Terps lead to 10. Hensh and Smith both scored to finish out the third quarter with a score of 16-4.

Julia Hoffman started the fourth quarter strong for the Terps by lobbing the ball into the Hawks’ goal.

Lipkin fired the ball past St. Joseph’s goalkeeper for her second goal. Continuing the team’s offensive prowess, Hensh scored her third goal of the game.

Hawks attacker Sydney Foster made it through the Terps’ defense to score, but her team was still losing 19-5.

St. Joseph’s continued fighting until the last second of the game. The Hawks scored once more, bringing the final score to 20-6.

After losing their opening game last season, the Terps began their season strong with a confident win.