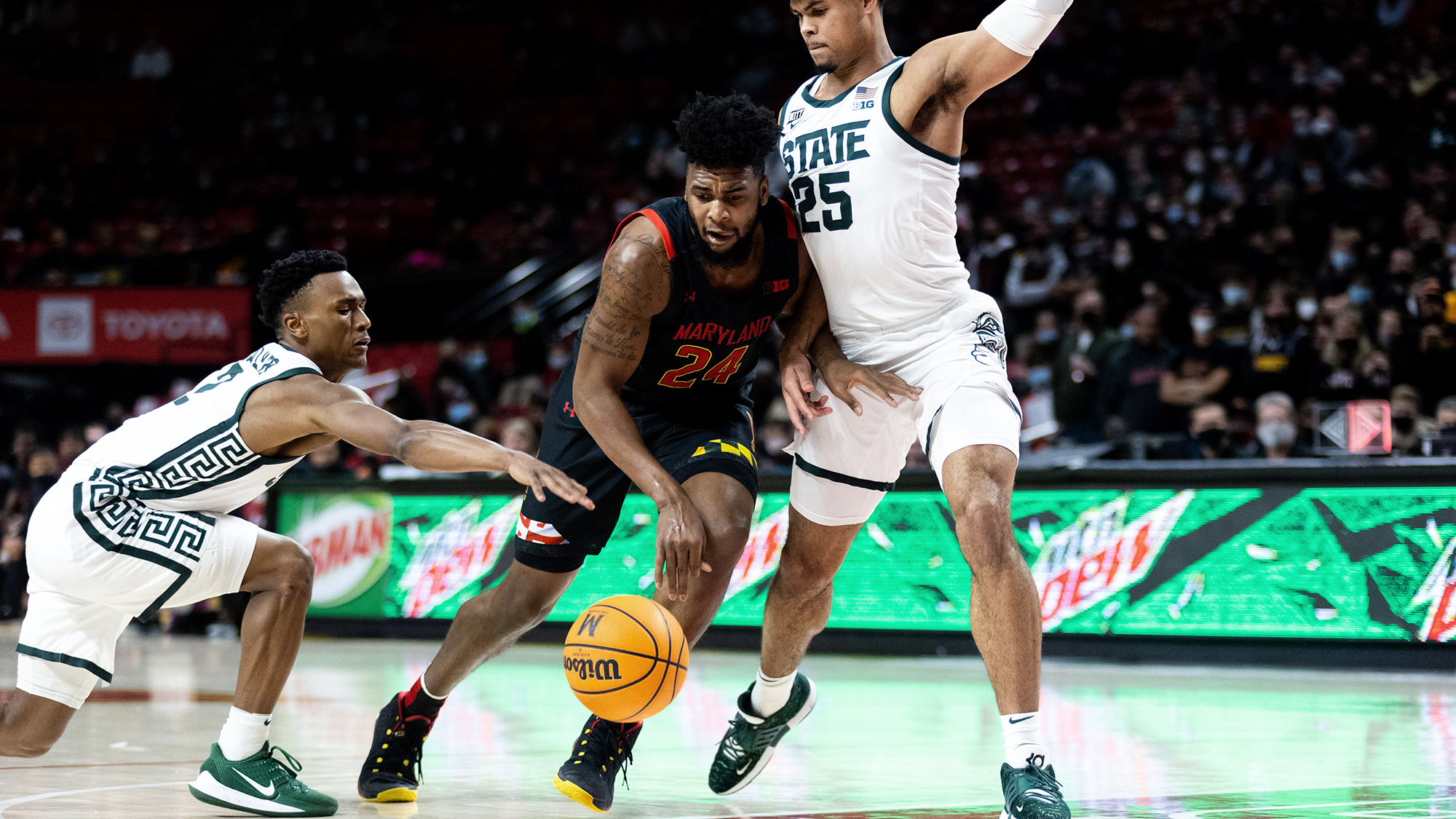 Donta Scott attempts to drive past a defender during Maryland men's basketball's 65-63 loss to No. 13 Michigan State on Feb. 1, 2022. (Julia Nikhinson/TheDiamondback)

E.J. Liddell dribbled the ball up the court at Value City Arena. Donta Scott followed, ready for the cover.

Scott got tripped up by an opposing Ohio State player and he hit the ground. He slid toward the basket as Liddell charged forward unimpeded.

Liddell dunked the basketball with Scott on the floor in a symbol of how Maryland men’s basketball’s matchup with the Buckeyes would end. Scott and Liddell were the leading scorers for their squads, but the Terps’ efforts could not combat Ohio State’s commanding offensive performance.

The Terps sank below .500 for the first time all season after a slow performance and a loss to the Buckeyes, 82-67.

“Donta played with a high level of energy today and had a good amount of fight for our team” interim head coach Danny Manning said. “Enough fight to give us some life and some type of energy with what he was doing, we just weren’t able to feed off that enough.”

Maryland showed promise after sinking the first shot of the game. Fatts Russell dropped a midrange jumper to score for the Terps after two unproductive possessions by Ohio State.

Qudus Wahab looked like another early bright spot for Maryland, dropping six first-half points, including a lay-in off a missed shot by Hakim Hart.

Wahab quickly racked up two fouls and Manning appeared to not want to take any risks — Wahab was pulled from the half after playing only 12 minutes.

Wahab contributed four more points when he reappeared in the second half.

While the Terps struggled severely from the field, the Buckeyes had the opposite problem. At 13:15, when Ohio State led, 17-7, it shot 70 percent from the field. Maryland was only shooting 30 percent.

The Terps’ troubles were even more evident from deep — with the exception of Scott. At the first-half whistle, Maryland shot 4-of-14 from three. Scott made two of those three-pointers. He finished the game with a career-high 25 points with five makes from beyond the arc.

“Donta gave us great energy and we needed that type of energy level from a lot of other guys out on our team,” Manning said. “But when Donta’s playing like that it opens up a lot of different things for our team.”

Multiple Buckeyes went on runs against the Terps’ defense. Zed Key had six consecutive points early in the half and Liddell clocked 10 straight nearly 10 minutes later.

Maryland did leave the first half with a slight edge in extra opportunities, pulling down six offensive rebounds and getting nine second-chance points. Ohio State didn’t register a single offensive rebound until the opening few minutes of the second half.

Ayala had his feet swept out from under him after an attempt to block a shot at the end of the first half. He landed on his side and limped to the locker room at the buzzer. Ayala was limping again at the end of the game and Manning had no update on his condition after the game was over.

The Terps left the court at halftime down to Ohio State, 42-29. Although Maryland stayed down for the rest of the game, their shooting dramatically improved.

Scott was chief among them, continuing his scoring dominance for the Terps into the second half.

“Just [believed] in my shot, and just knowing that. . . if I shoot again I’ll probably make it again and just keeping my head up if I miss it,” Scott said.

Russell also made his mark at the basket in the second period. The point guard charged to the basket and dropped a layup to bring his team within 20 points of the Buckeyes. He shot over Ohio State’s zone in the second half and sank a three.

Russell thrived under the pressure by a hostile Buckeyes crowd in the second half — seven of his 12 points came in the second 20 minutes.

Scott quickly followed Russell’s bucket with another three and the Terps attempted to claw and close the gap.

“I always try to motivate [my teammates] to compete,” Scott said.

Ayala dropped a deep three and was fouled on the play. With a four point play on the line, Ayala missed his free throw.

Manning emphasizes the importance of getting to the free-throw line and capitalizing on opportunities for free points. Maryland struggled from the stripe, only going 11-16.


Another slow start was the Terps’ undoing. After shooting 32 percent from the field in the first half, even improving to 46 percent in the second couldn’t compete with Ohio State’s consistency. The Buckeyes remain undefeated at home and the Terps drop to 11-12 on the season.

“The biggest thing is, when you go on the road, or any time in general, you can’t let a team shoot 50 percent in a half,” Manning said. “That’ll put you in a pretty big hole, which it did for us this evening.”