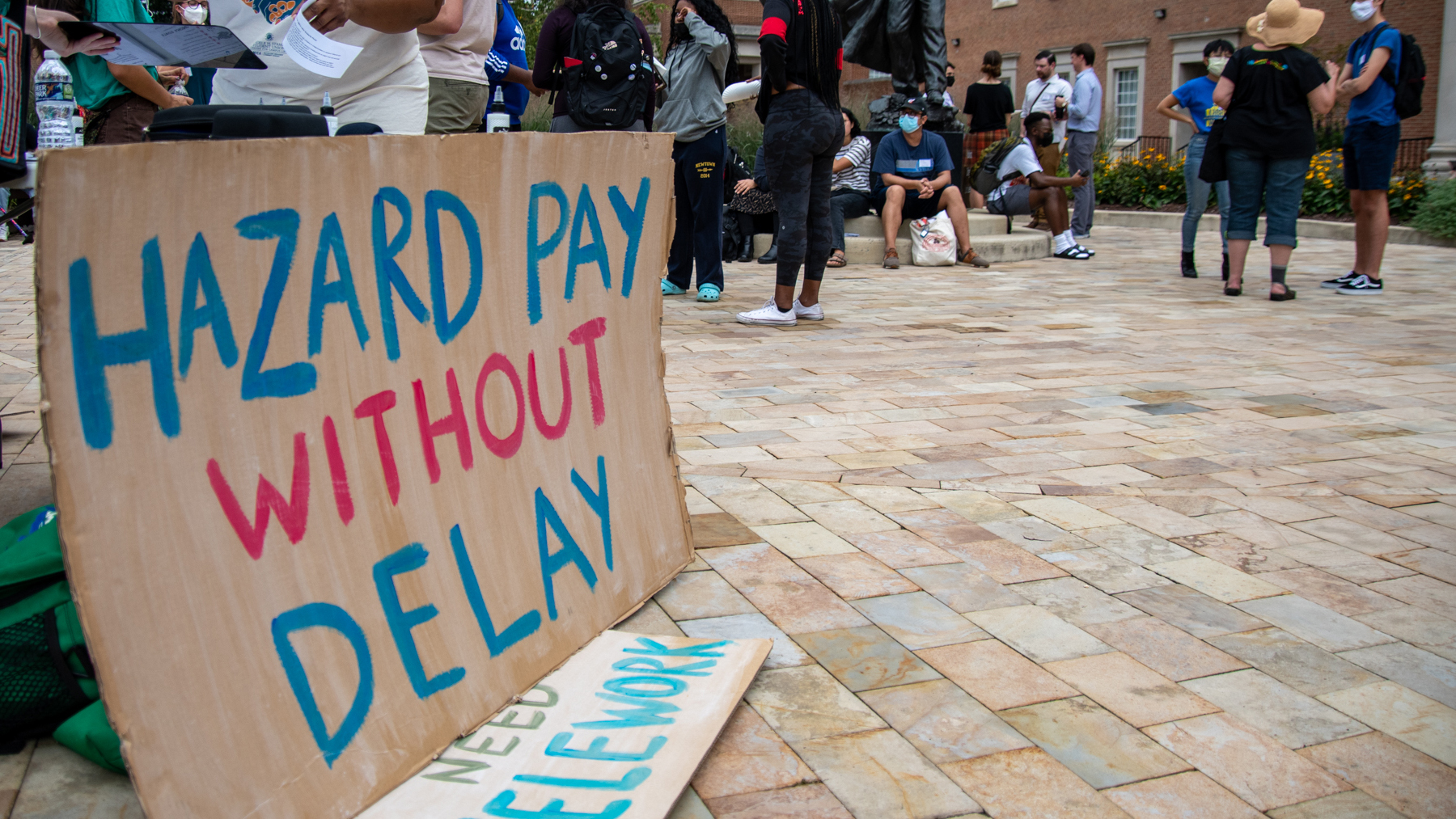 A sign advocating for hazard pay at the Labor Solidarity Picnic at Hornbake Plaza on Oct. 8, 2021. (Joe Ryan/The Diamondback)

The University System of Maryland announced that university system employees will receive a one-time $1,500 bonus, which will be distributed starting in January, according to a news release posted earlier this month.

This decision came after the system’s Board of Regents voted to increase the minimum wage for union-represented employees to $15 an hour last month. AFSCME Council 3, the union representing state employees, was able to extend a pay raise slated for state employees to all system employees due to bargaining with the governor’s office, said Stuart Katzenberg, the union’s director of collective bargaining and growth strategies.

According to the news release, starting this month, employees will also receive a one percent cost of living adjustment and average raises of 2.5 percent based on merit. Those who receive performance reviews of “meets standards” or better qualify for the merit-based raise.

In July, employees are set to receive another three percent COLA increase, which will be calculated based on the COLA and individual merit increases given in January, according to the news release. Employees will also receive another merit increase averaging 2.5 percent in July with the same conditions as the January increase.

“I’m deeply grateful to Gov. Hogan and his administration for recognizing — and rewarding — the vitally important work of our employees,” said university system Chancellor Jay Perman in the news release.

Though he sees it as an important first step, Katzenberg said he would have liked to see a larger increase for university system employees, especially since many of them have not received COVID-19 hazard pay.

“Our members deserve more for what they’ve been through with COVID,” Katzenberg said. “Our members have worked in the health center, in the dorms, in all the academic buildings, at risk of great infection without proper PPE.”

AFSCME is ready to begin negotiations with the system to further discuss issues of pay including wage compression, said Todd Holden, the president of local AFSCME 1072, the union that represents University of Maryland employees.

The wage increase to $15 an hour has introduced wage compression into the university system’s wage system, as many people in the lowest pay band have now started to make as much as their coworkers who worked for the system for longer, Holden said. Wage compression occurs when new hires earn the same or a similar amount as seasoned employees despite their lack of seniority.

“Seniority and longevity on the job should mean something,” Holden said. “A person who has dedicated years of service to the institution shouldn’t find themselves in a position where they’re making less than people who have only just recently started working.”