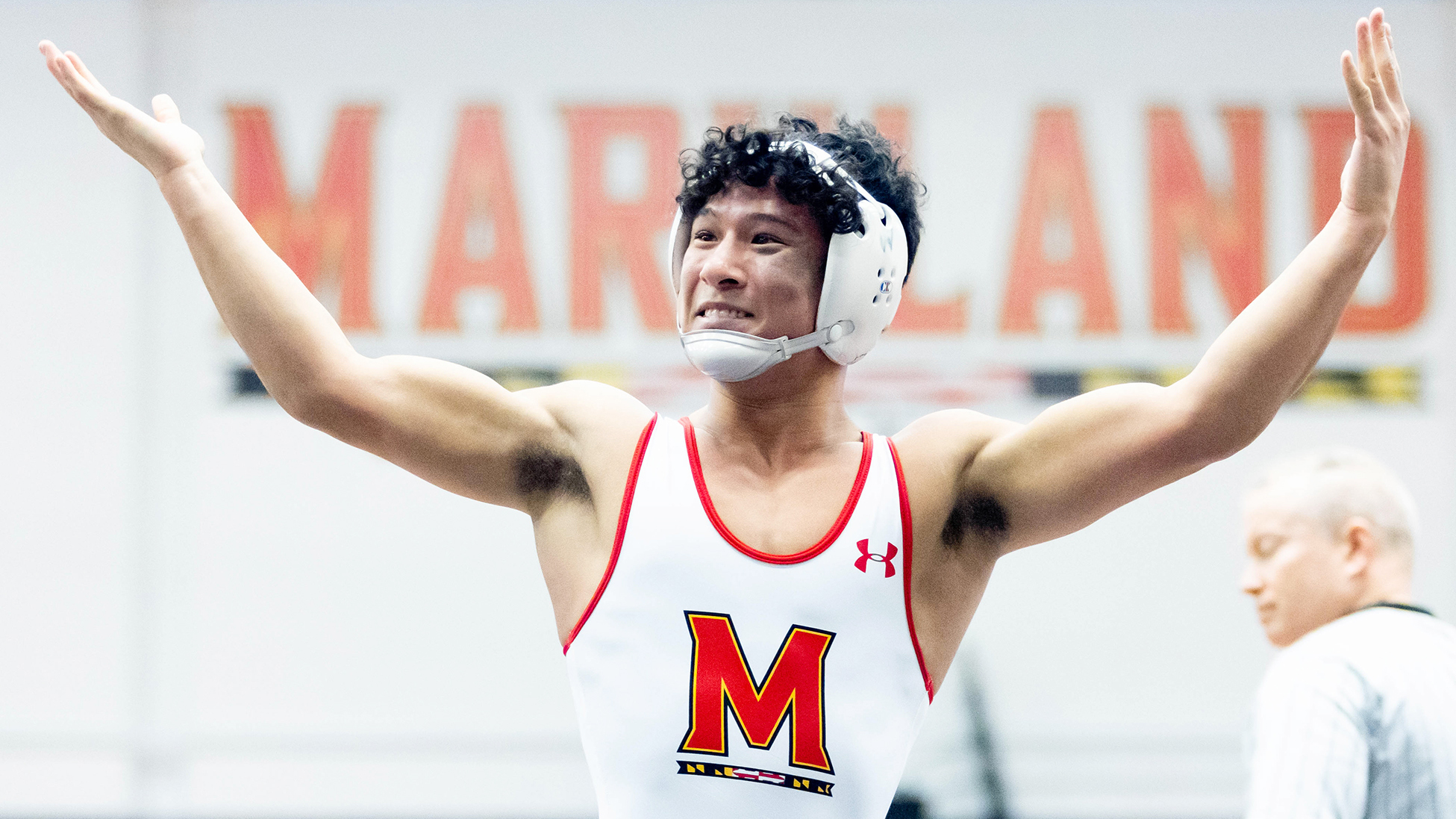 King Sandoval celebrates his victory over Duke during Maryland wrestling’s 23-17 win over the Blue Devils on Dec. 4, 2021. (Julia Nikhinson/The Diamondback)

After a dominant 10-0 major decision victory for King Sandoval, Maryland wrestling found itself only down by one point on the road against a ranked opponent.

But, No. 6 Ohio State won the following eight bouts to score 34 unanswered points, blowing out the Terps, 39-4.

“We got smacked in the mouth and never smacked back,” coach Alex Clemsen said.

Things didn’t start well for Maryland as No.18 Malik Heinselman won by tech fall against Zach Spence, continuing the Terps’ struggles at 125.

But Sandoval quickly cut into the deficit, facing Dylan Koontz.

It wasn’t an instant-win as he has been accustomed to, but Sandoval went on the attack with an early takedown. He picked up an escape point in the second period to make it 3-0.

In the third period, Sandoval took control and used his legs to reverse a position to send Koontz onto his back for a takedown followed by a near-fall to get a major decision and a bonus point.

“We’re seeing a better version of [Sandoval],” Clemsen said. “I think the pins and some of his swagger [has] probably led to some confidence overall in his wrestling.”

But just like in recent losses to Oklahoma and Indiana, that momentum was brief for Maryland as No. 23 Dylan D’Emilio turned William Berkowitz on his back for an early fall win in the first period to extend the Buckeyes’ lead, 11-4.

At the 149 bout, results didn’t get any better for the Terps with No. 2 Sammy Sasso showing why he’s the reigning Big Ten champion in his class, getting Ohio State’s second tech fall of the afternoon over Michael North.

But a manageable deficit soon became a nightmare at 157 when Jashon Hubbard attacked from the opening whistle against Conner Decker and locked him in a cradle to finish off a win in only 41 seconds.

“It’s about mitigating the damage, Clemsen said. “Sometimes you got to win battles, the ugly battles and we had a couple guys [today] not do that.”

But the bonus-point barrage continued for Ohio State at 165 as No. 7 Carson Kharchla found a takedown on Gaven Bell in the opening moments of the second period.

Dominic Solis gambled for a double leg takedown in the second period of his 174-pound matchup, but Fritz Schierl kept his balance and countered for his own takedown and awarded near fall points. Solis lost by decision, 5-2.

No. 12 Kyle Cochran faced his second ranked opponent of the weekend — No. 7 Kaleb Romero — and Cochran drew first blood in the second period with an escape. But Romero caught Cochran off guard and went for his legs for a takedown and a 2-1 lead.

Cochran answered with another escape and gambled, going for Romero’s legs. But the All-American showed his skill, countering Cochran and spinning him around for the takedown to go up and eventually win by decision, 6-2.

“[Romero] put me in positions that sometimes I didn’t want to be in. I think I could have done things a lot differently,” Cochran said. “I’m happy that I had this match, it’s good experience for NCAA in the future and Big Ten [championships].”

Despite the loss, Cochran split the weekend 1-1 against ranked opponents as he continues to build towards the Big Ten tournament in March.

Kevin Makosy — once again filling in for No. 32 Jaron Smith — couldn’t break his cold streak and lost to No. 20 Gavin Hoffman by decision, 10-3.

No. 31 Zach Schrader tied it up against No. 12 Tate Orndorff but gave up a takedown in the third period to lose by decision, 4-1, continuing his own slump.

Sunday was a tale of two different programs. And now on a four-dual losing streak, Maryland heads back home after a tough weekend, searching for positivity. But competition won’t get any easier with No. 8 Wisconsin next up on its schedule.

“We got to be ready to fight,” Clemsen said. “There’s no easy weekends [in] our league.”