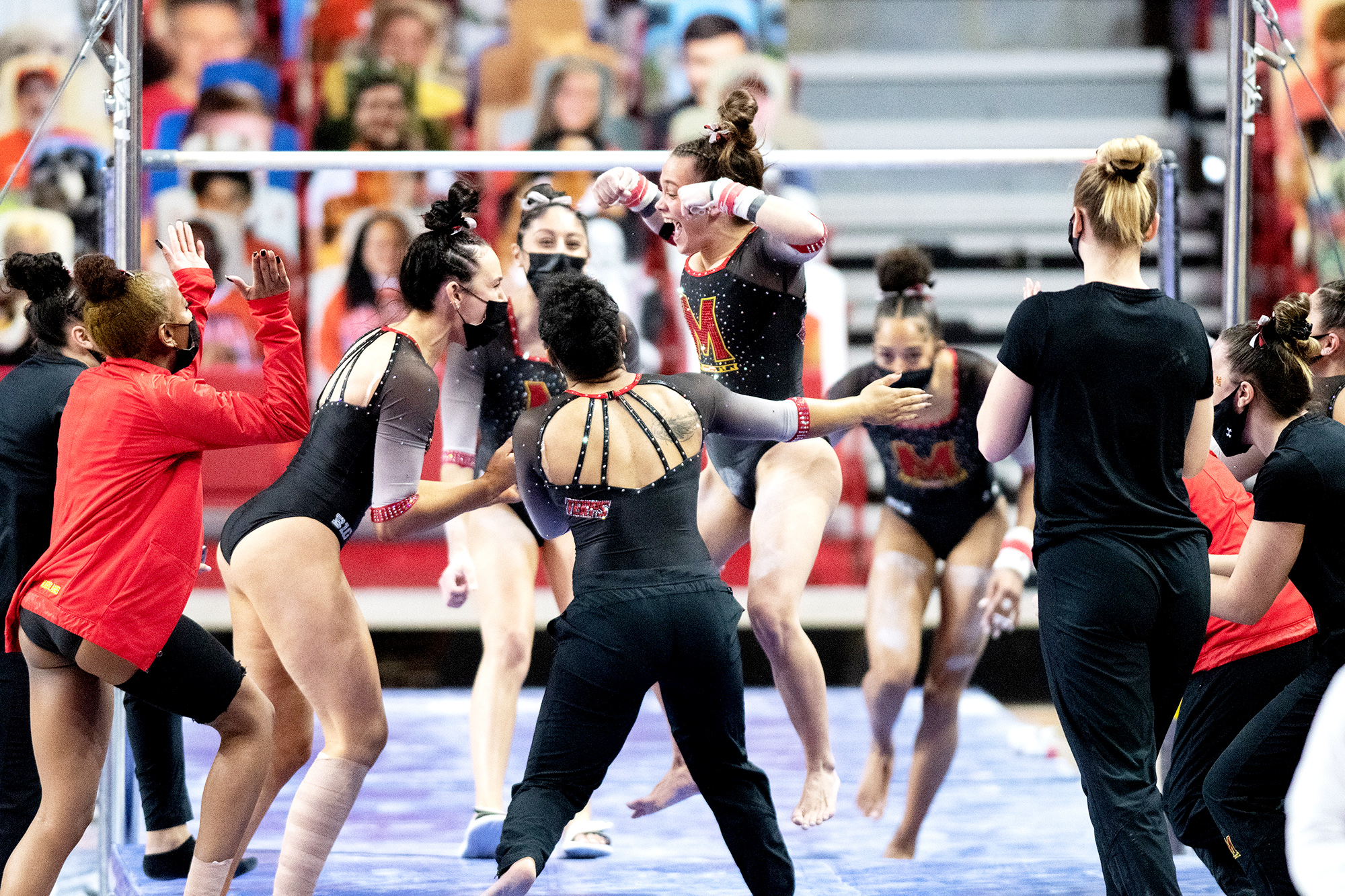 Maryland gymnastics' Sanya Glauber celebrates during the Big Five meet on Feb. 26, 2021. Glauber had not competed for the Terps in over a month — she had suffered falls in her only two appearances for Maryland this season and was recovering from an injury. (Julia Nikhinson/The Diamondback)

All Maryland gymnastics could do was watch and hope as its season opener came down to the final routine.

There, Pittsburgh freshman Sidney Washington — who was one of only three gymnasts in the event to compete in the all-around — was tasked with closing out the Pitt Tri-Meet in her first collegiate meet.

The score was the lowest Maryland has tallied since 2017. Nonetheless, they ended up victorious, beginning the 2022 season at 2-0.

The Terps weren’t the leaders after any of the first three rotations. Two rotations in, they were over one full point behind Long Island and over a point and a half behind the Panthers.

That, coupled with 2021 All-Big Ten second-team selection Reese McClure being out due to a recovering sprained ankle, was not a sign for optimism. But despite early problems, Maryland was able to edge out wins over both teams — one main reason for that was its next gymnast up mentality.

“I mean, [that mentality], it’s crucial, right. And that’s the thing, we feel like we’re deep enough that we can handle it and we had to do it again today,” Nelligan said.

McClure’s Dec. 2021 injury wasn’t the only one that forced Nelligan to adjust his lineups, as junior Tayler Osterhout injured herself from a short landing while practicing the vault. Osterhout, who was scheduled to compete in the vault and floor, was replaced in vault by sophomores Elizabeth DeBarberie and in floor by Alexa Rothenbuescher, neither of whom expected to compete in each respective event.

DeBarberie hadn’t competed in vault for the Terps before and, for Rothenbuescher, it was her first collegiate appearance. Despite Rothenbuescher having to wait to get her chance, she made the best of it, as her 9.800 was a team-high for floor.

“Initially, I was really nervous. But I know I just needed to trust myself and do what I do in the gym and hit a routine,” Rothenbuescher said. “Last year, it’s not great being on the sidelines on time, but I knew that was my role that year, and I had to do the best right team and cheer them on.”

On top of Rothenbuescher, freshman Josephine Kogler was also able to make her presence felt in her first Maryland debut.

Heading into the final two rotations and trailing by a sizable margin, Kogler scored a 9.850 on vault — the lone highest vault performance and tied for the best score given out on any event.

“Going into the day, I did have pretty high expectations, especially on vault being one of my best events, personally, I think. And I really just trusted our coaching, and we’ve done a lot of reps. So I was very confident going into it,” Kogler said.

Kogler also competed in beam and floor, where she earned 9.650 in both.

And despite Nelligan having the confidence and faith in Kogler, shown by competing her in three events, even he couldn’t have expected that stellar of a performance.

“We knew she had that potential, but I didn’t think it would happen this early,” Nelligan said. “She was leadoff [in vault]. So she was first to put up a big score like that, and [doing it] in the leadoff spot is extra impressive. So yeah, I think in some ways, she’s ahead of schedule, because we knew she had that potential, [but you] usually don’t see a freshman do that week one.”

With scores over 9.800 on the bars in the final rotation from senior Audrey Barber and junior Emma Silberman leading them to the finish, and no score below 9.725 counted, the Terps were able to end strong to get into the win column.

“The bars group has been working extremely hard all first semester and this winter session, so [I] felt like we were ready. And then the other thing that we did this week is we played this exact scenario,” Nelligan explained. “I was hoping it wouldn’t have come to that, but it did. And we were ready.”

Despite a low score, seeing new gymnasts show high potential early on, as well as seeing a group bounce back after a rough start can provide the Terps with optimism about the rest of the season.

After its opening success, Maryland will get back to the gym where it will prepare for its home and conference-opener against Rutgers (2-4), which put up a 194.550 outing yesterday.