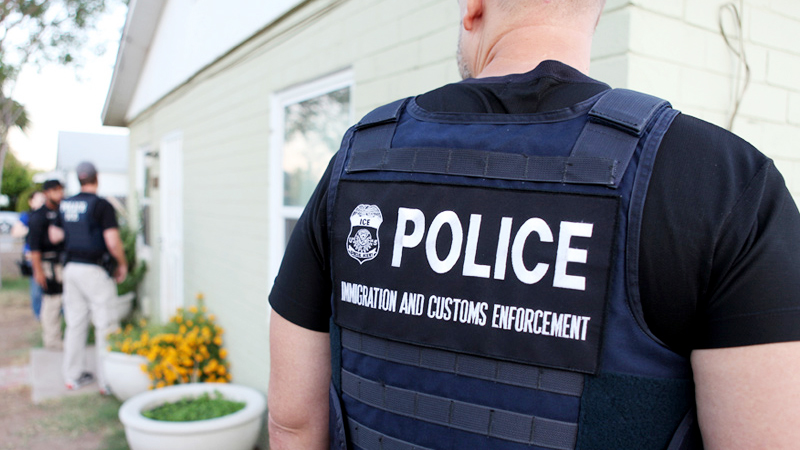 The Dignity not Detention Act, keeps the U.S. Immigration and Customs Enforcement and its detention center practices out of the state. (Photo via Wikimedia Commons)

aimed to protect immigrant families in the state, but they were vetoed by Hogan. The first, called the Dignity Not Detention Act, keeps the U.S. Immigration and Customs Enforcement and its detention center practices out of the state. The second, the Maryland Driver Privacy Act, prevents ICE from using Maryland drivers’ personal information to find and deport immigrants.

The Dignity Not Detention Act ends existing agreements between ICE and Maryland counties and prohibits police from discriminating against an individual based on immigrant status. The legislation also prevents state or local governments in Maryland from entering into new contracts to detain immigrants.

The law does not end detention centers operated by the federal government, according to a statement from the Capital Area Immigrants’ Rights Coalition, an organization that provides legal representation and social services for immigrants.

CAIR has been advocating for the closure of ICE facilities in Maryland for more than a year, but they are “one step closer to a future where immigration detention does not exist, where people are welcomed with compassion, safety, and dignity,” according to the statement.

Maryland is one of the few states that allows undocumented immigrants to receive their driver’s license, so the passing of the bill “was such a massive victory for immigrant families who needed to be able to use a car without fear of deportation,” said Cathryn Paul, the government relations and public policy manager for CASA, a grassroots immigrant advocacy organization.

The Maryland Driver Privacy Act would require federal immigration officers to obtain a warrant before searching the Maryland Motor Vehicle Administration’s databases, and it would require the MVA to report how many requests they get from ICE.

Paul said the bills are a step forward for the immigrant community in Maryland as the state’s legislature hasn’t passed immigration reform on this level since the Dream Act passed in 2012.

One bill that didn’t pass during the legislative session that CASA is hoping to continue pushing for is a universal representation bill. The bill would provide undocumented immigrants with legal representation in immigration court, Paul said.

Prince George’s County and the city of Baltimore are the only jurisdictions in Maryland with universal representation programs for their residents, so the bill would provide programs for the entire state.

“With the universal representation bill, we’re hoping to provide representation for Maryland residents who continue to be detained by ICE and are transferred to facilities out of the state,” said Lorena Ortega, an Immigrant Justice Corps community fellow at CAIR.

CASA is also working on advocating for more accessible healthcare for undocumented immigrants because they are not eligible for health care under the Affordable Care Act, Paul said.

Although the Dignity Not Detention Act is a great step, Paul said there is still a great amount of work that needs to be done to continue limiting the state’s connection with ICE.

“I’m feeling optimistic about the legislature, continuing to move forward with additional policies that are going to support these individuals,” she said.