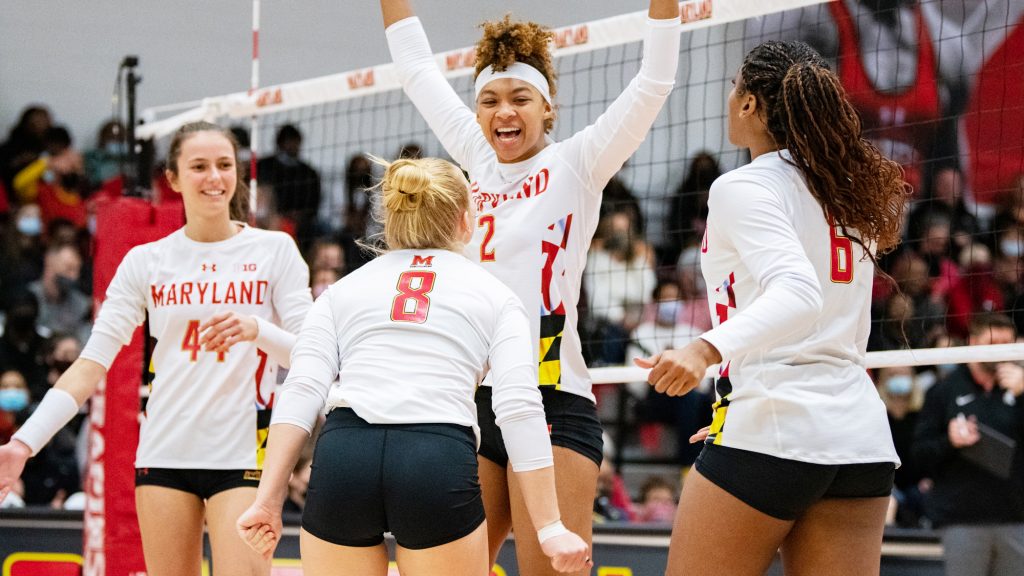 Rainelle Jones raises her arms in celebration after a point during Maryland volleyball's 3-0 loss to Ohio State on Nov. 26, 2021. (Joe Ryan/The Diamondback)

From the onset of Maryland volleyball’s fall 2021 season, it was clear the Terps had set a higher standard for their program.

Waltzing to a flawless 12-0 record in nonconference play, coach Adam Hughes’ squad flaunted a consistency seldom seen in College Park over the past few seasons. Sophomore outside hitter Sam Csire continued to improve following a breakout freshman campaign, while middle blocker Rainelle Jones helped the Terps’ touted block live up to their billing at the net.

But the promise of an eye-catching season truly came to fruition in Maryland’s first conference match, when it pulled off a shocking 3-2 upset of then-No. 2 Wisconsin — the biggest win in Terps volleyball history.

“I would say we’re really confident, and we know that we have the ability to beat the really good top 10 teams because of our Wisconsin win,” Csire remarked later in the season.

Maryland’s upset win catapulted them toward the top of the Big Ten leaderboard, and nearly gave Hughes’ squad its first top 25 ranking since he took the helm in College Park.

[Maryland volleyball drops final match of the season to No. 10 Minnesota, 3-1]

And while the Terps’ scintillating start soon fizzled — a straight set loss to Minnesota just days later was the first of four straight conference defeats — the potential for one of their most successful seasons remained in play.

Jones and Csire continued to lead Hughes’ squad on both sides of the ball, while standout freshman libero Milan Gomillion racked up multiple Big Ten Freshman of the Week honors for her defensive play.

Sophomore setter Sydney Dowler helped quarterback Maryland to 19 wins for the first time in over a decade, playing in all 112 sets on the season with a team high 1,090 assists and 37 service aces.

“We’ve got a really good core,” Hughes said. “I think the group itself has been really strong … and I think the core is hungry and humble.”

However, despite leading his team to its most total wins since 2010, Hughes knows being on the outside looking in to the NCAA tournament isn’t the endgame for his program.

The top eight Big Ten teams were selected to the NCAA tournament at the conclusion of the regular season — Hughes’ squad finished ninth in the conference with a 19-13 record. For the Terps’ coach, making the Big Dance is the next step for a program seemingly on the rise.

“Not the destination where we wanted it to end,” Hughes said after Maryland’s final match of the season against the Golden Gophers. “We’d love to continue playing, that’s one of our goals here at Maryland, but obviously a lot of progress made this season.”

While Hughes’ goal of a tournament berth in a loaded conference is certainly a challenge, he likely won’t have to worry about a massive rebuild as he did this past offseason.

Underclassmen Csire, Dowler, Gomillion and Laila Ricks each logged starting minutes for Hughes’ squad this season and are primed to return to the starting lineup next fall. Freshman outside hitter Erin Morrissey, who missed almost all of this season after tearing her ACL against Virginia, will also re-enter the fray given her starting role pre-injury.

Seniors Jones and Maddie Naumann, who were both granted an extra season of eligibility following a coronavirus-riddled spring season, will have the option of returning to College Park next fall as well.

“I know Rainelle and Maddie have an extra year, and we’ll see what they decide to do,” Hughes added.

And with Jones finishing the season atop the national leaderboard with an astounding 1.73 blocks per set average, her incoming decision in addition to the return and development of Maryland’s talented youth could help Hughes’ squad take another leap following a successful fall slate.

“Hopefully next year I’ll be here and continue that again,” Jones said of her possible return. “Still an ongoing thing, I talked to the coaches about it, creating a plan and whatnot, but right now it’s sticking with Maryland.”