Maryland volleyball drops final match of the season to No. 10 Minnesota, 3-1 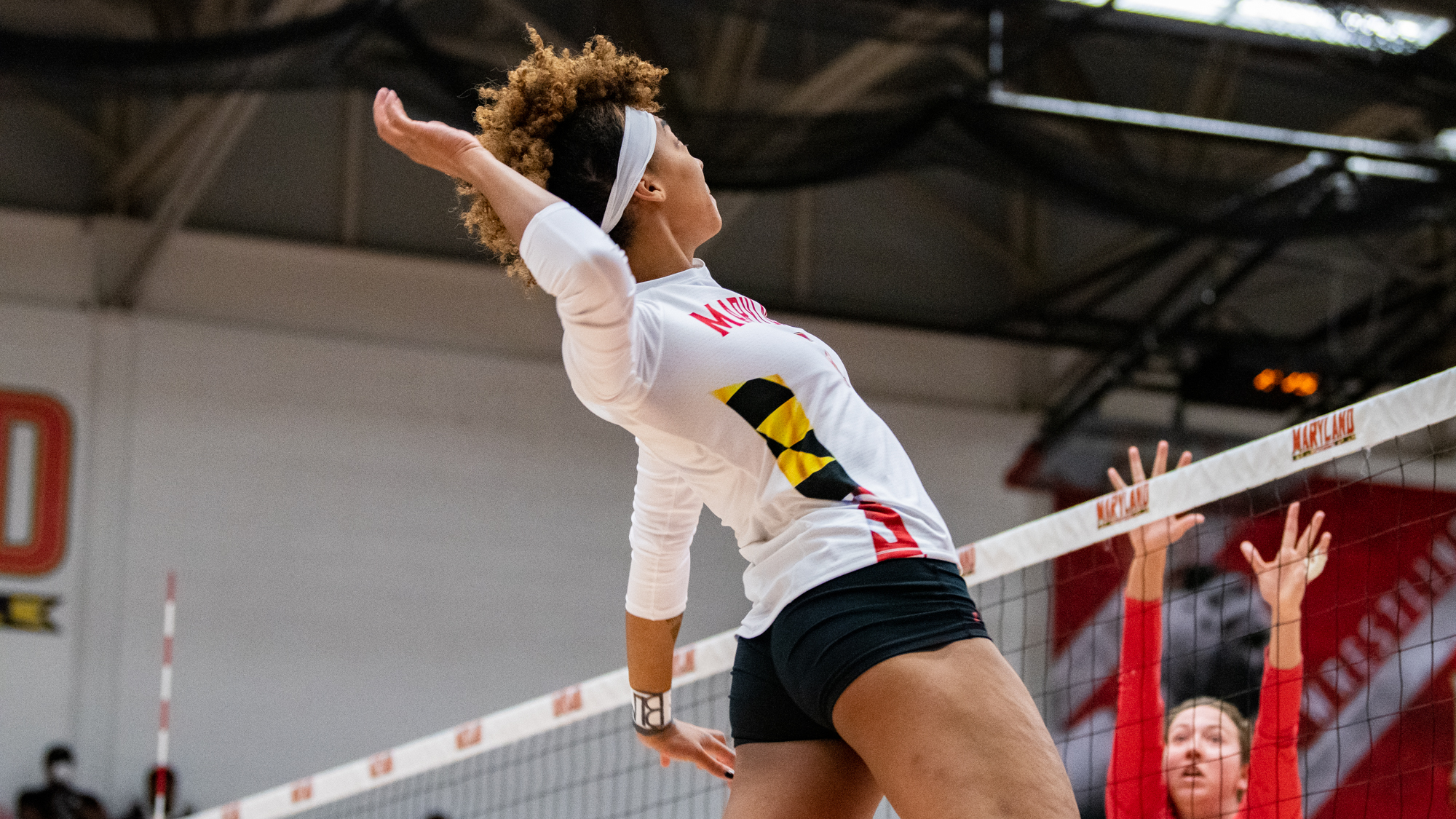 Rainelle Jones goes up for a spike during Maryland volleyball's loss to Ohio State, 3-0, on Nov. 26, 2021. (Joe Ryan/The Diamondback)

Katie Myers leapt off of one leg, meeting a deftly-placed set at its apex for a sizzling kill attempt.

Myers’ powerful putaway attempt struck Sydney Dowler directly on the chest, where the ball careened into the air, off of the Xfinity Pavilion ceiling, and back to the hardwood for Minnesota’s 59th and final kill of the evening.

“Really proud of this group, I thought we had a lot of fight, energy was good,” coach Adam Hughes said following the final match of his squad’s Fall 2021 season. “Obviously [tried] to find ways to win, especially for the seniors and the mark that they’ve made… very proud of them nonetheless.”

Rainelle Jones and Dowler kicked off Maryland’s senior night with a bang, roofing a Jenna Wenaas kill attempt on the opening point to the delight of a packed Maryland crowd.

Outside hitter Sam Csire converted on the first of her five first-set kills on the subsequent point — a positive sign for a Maryland team hoping to pull off another miracle victory.

The Golden Gophers quickly countered the Terps’ scorching start, converting on a quick flurry of kills to set the stage for a back-and-forth first frame. Neither team garnered more than a two-point lead until the closing moments of the set, when back-to-back Airi Miyabe spikes gave Minnesota a comfortable 21-18 cushion.

But despite falling into a late three-point hole, Maryland wouldn’t be denied.

A crafty dump-kill courtesy of Dowler followed by Csire’s third kill of the set spurred a 4-1 Maryland run to flip the set on its head and forced Minnesota coach Hugh McCutcheon to burn a late timeout.

And while the Gophers initially responded with a block assist following the break, Maryland countered with a 3-0 run. The frame was capped off by a stifling rejection from Jones and Laila Ricks at the net to clinch a gritty 25-23 first set victory.

“I feel like a lot of us played a lot more free than we usually do,” Jones said of the first set win.

The Terps’ hot start spilled over into the second set, as another Dowler dump-kill opened up a 7-4 advantage early in the frame. The Gophers once again showed poise in the face of constant Maryland pressure, rattling off seven straight points midway through the frame to seemingly take control of the set and match.

However, in what would become a central theme of the match, the Terps didn’t go down without a fight.

Jones and Ricks combined for yet another block assist to halt Minnesota’s hot streak, reinvigorating a once-muted Pavilion crowd. The thunderous block sparked a 7-2 Maryland run, culminating in a solo block from Dowler over Myers to knot the second set at 22 apiece.

“I thought Syd showed why she’s one of our leaders,” Hughes said. “She’s the ultimate competitor, and she’s a big part of what we’re doing here at Maryland.”

But this time, it was the Gophers that emerged victorious in the contentious second set.

Miyabe continued to be dynamite for McCutcheon’s squad. She converted on her sixth kill of the second frame to break the tie following Dowler’s rejection. On the next point, a Jones kill attempt was swatted to the ground by Melani Shaffmaster to give Minnesota a handful of set points.

And as Miyabe’s tenth total kill of the match flew past the Terps just moments later, the back-and-forth slugfest was tied at one set apiece.

Both squads exchanged runs in the third set of the fiery Big Ten battle, with each team hungry to take a one-set advantage into the fourth frame.

Two Csire kills in quick succession gifted Maryland a four-point advantage midway through the set. But a 6-2 Gopher run moments later brought the set to a 19-19 stalemate.

Minnesota grabbed the next two points of the set, causing Hughes to take a timeout to talk things over with his squad. The Gophers continued to apply pressure out of the break, converting on an array of kills to run away with the third set, 25-20.

The Terps fought valiantly in the closing moments of their regular season — Jones finished the match with 12 blocks. But Minnesota proved too tough to handle in the fourth and final frame.

The Gophers jumped out to a six-point advantage and never looked back, finishing the night with 59 kills in a 25-18 fourth set victory to end their regular season slate in the win column.

But as Myers’ final kill dropped to the floor, the Terps held their heads high in their final huddle. Saturday’s loss put an end to a regular season filled with positives for Hughes’ squad, which enjoyed its winningest season since joining the Big Ten.

“I’m so happy, I’m so glad that we’re making our mark, proving that we’re worth it, proving that we belong in the Big Ten,” Jones said. “We’re the underdogs and we’ll continue to prove that, but we’re giving lots of teams a run for their money.”x