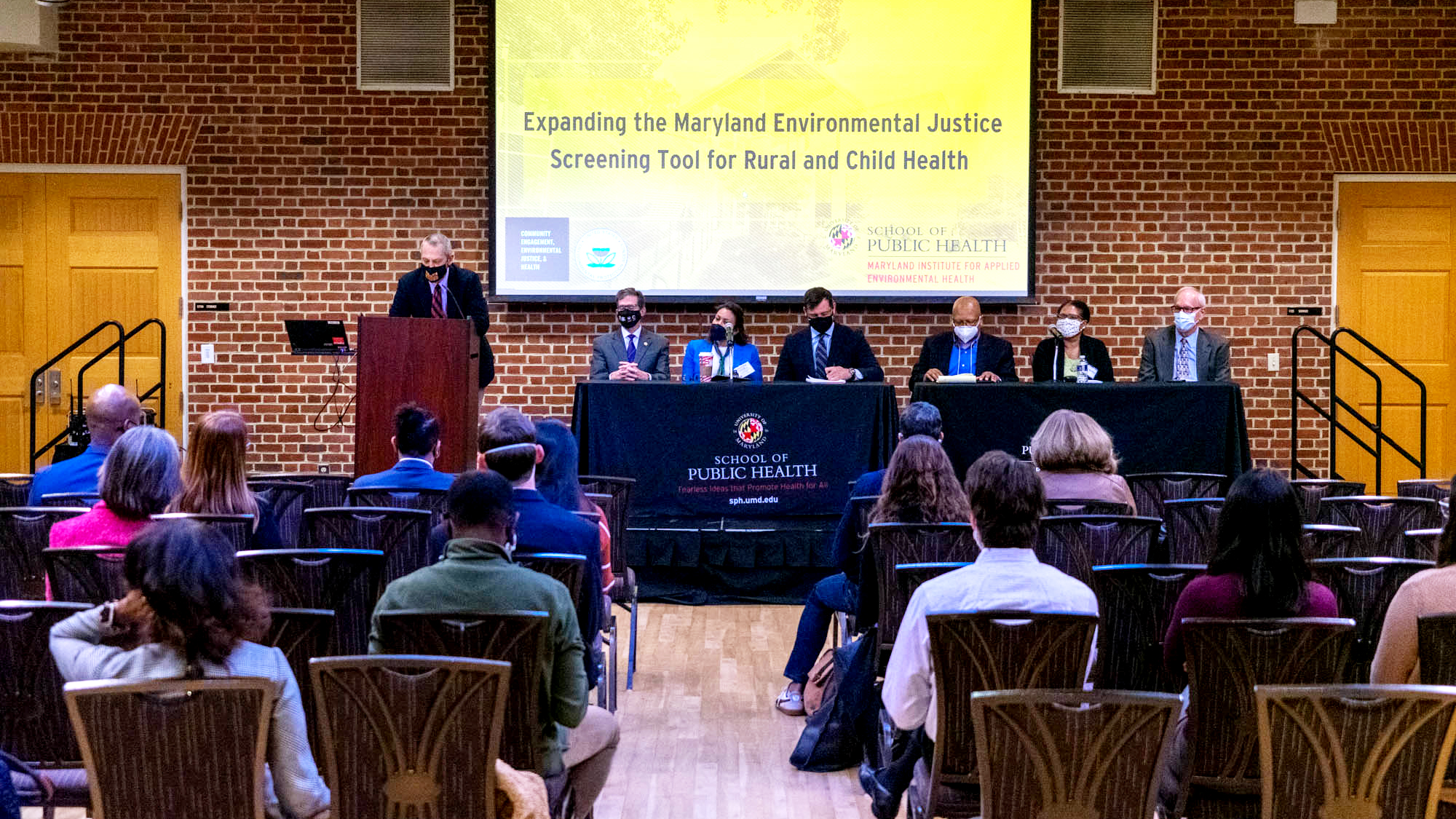 The EPA awarded a $100,000 contract to the University of Maryland's School of Public Health on Nov. 30, 2021. (Freddy Wolfe/The Diamondback)

The funding, which was presented in Stamp Student Union, will support the expansion of the state of Maryland’s existing Environmental Justice Screen Tool.

The mapping tool was developed by Dr. Sacoby Wilson, an associate professor of applied environmental health, and his team, along with the Maryland Environmental Health Network and the National Center for Smart Growth.

The Maryland Environmental Justice Screen Tool maps areas in the state using demographic indicators, and will be expanded using EPA funding to include an environmental justice score based on demographics and proximity to hazards such as air toxins and heat. The team will also include data that targets rural areas, children and segregated areas, all of which are currently underserved and underrepresented by the mapping tool.

[Longer mosquito season might become the norm with climate change]
Wilson, who is also the director of the Community Engagement, Environmental Justice and Health initiative, accepted the award on behalf of the public health school.

“It’s really important for these tools to be able to go … to the next level,” Wilson said. “We can achieve that goal of empowerment science and liberate communities from toxic trauma and dealing with environmental injustice.”

Wilson said he hopes state agencies, commissions and local communities use the tool to identify and prioritize areas that need more investments in terms of climate resiliency.

Ortiz noted that President Joe Biden’s commitment to environmental justice and public visibility of climate change made the uses of the new tool all the more timely.

“We’re in a unique period of time in the environmental movement and environmental justice in particular. We have the benefit of a lot of know-how — the technology has never been more sophisticated than it is today,” he said.

The tool’s potential to affect public policy and funding for communities that environmental injustices impact the most was especially important for Pinsky. He noted that although policymakers could make impassioned speeches, data could be a real driver for change.

[Want to help the environment? Some local residents suggest keeping leaves on yards.]

“It’s going to take data, it’s going to take mass mobilization — people being active in the streets,” Pinsky said. “We have to make sure we invest appropriate money in those communities that have been voiceless, unfortunately. And we have to give them voice and give them data that they can organize and advocate.”

Involving local communities — who often face a multitude of risks related to environmental justice — in the process and engaging residents to make sure the tool is reflective of community experiences is also vital for Wilson.

“Making sure that community collected data can also be integrated to the tool is very, very important so communities can speak with their own voice to their own data,” he said.

Wilson expects many of the new updates to the tool will come online in the next six months. His team also plans to send an updated report to the EPA at the three-month mark.

Tools that help better understand communities such as those Wilson helps develop are reflective of academia’s obligation to change the world, said Boris Lushniak, dean of the public health school. Lushniak highlighted the “series of syndemics,” a cluster of epidemics facing the world right now, including racism, climate change and environmental justice, to close out the panel.