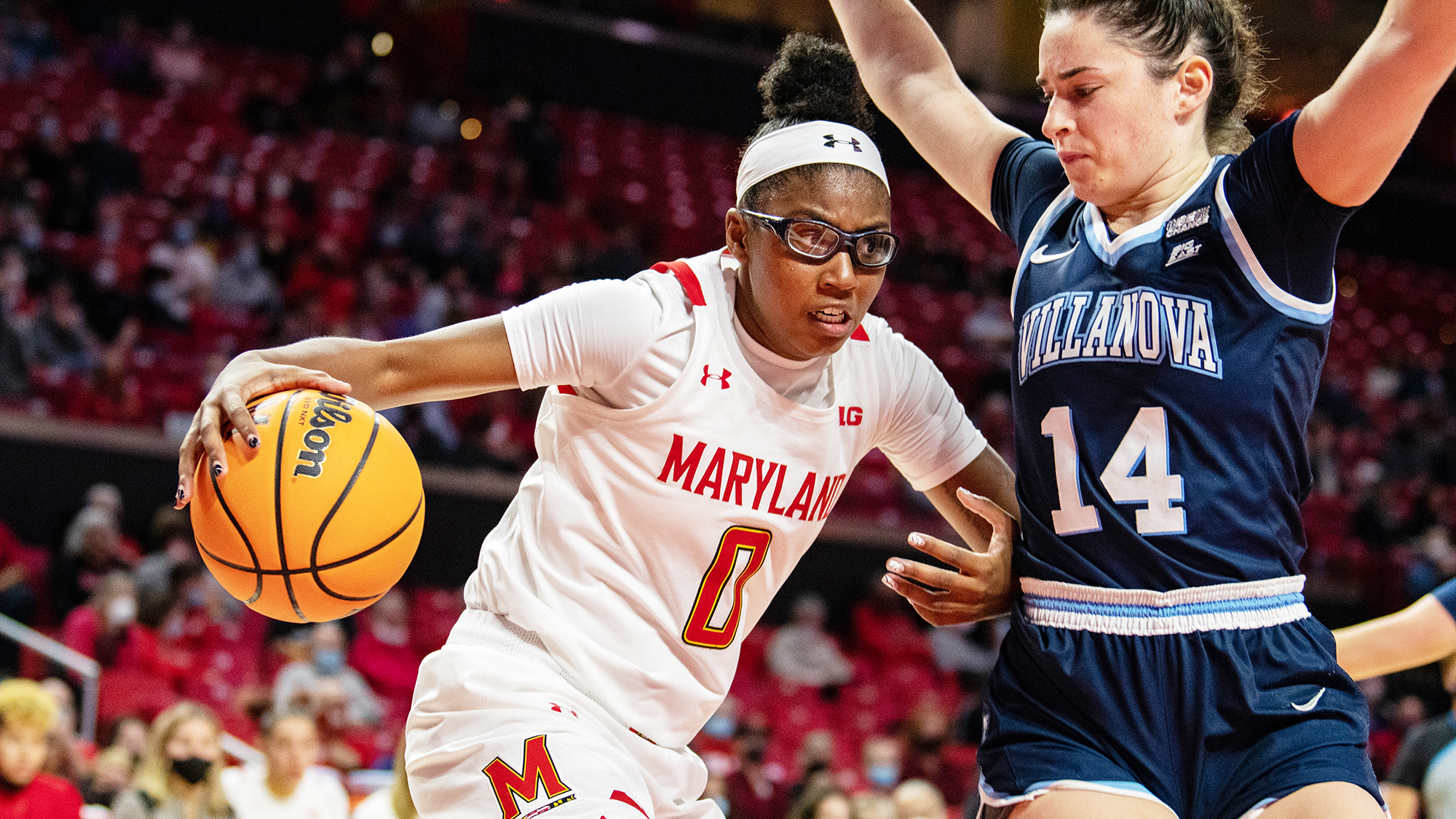 Maryland’s Shyanne Sellers dribbles past Villanova’s Brianna Herlihy during the Terps’ 88-67 win over the Wildcats on Nov. 12, 2021. (Joe Ryan/The Diamondback)

In Tuesday’s game against Mount St. Mary’s, Angel Reese and Shyanne Sellers kept their feet on the gas for Maryland women’s basketball.

Hovering around a minute to go in the fourth quarter, Reese got a steal at the 1:24 mark and heaved a full court outlet to Sellers on the fast break.

The freshman caught the pass in stride as she finished the easy layup on the other end. Fast forward to the next possession, and another steal by Reese set up the very same play — as Sellers sped down the floor for another easy lay-in, this time assisted by Katie Benzan.

While the garbage time effort from the two young guns in the Terps’ rotation may have been a tad excessive, they still made their impact known throughout the contest as the two racked up quiet double-doubles.

Reese finished with a dominant 18 points and 15 rebounds — her third double-double of the season but easily the most low-key. Sellers, meanwhile, got the attention of coach Brenda Frese for her stat line. She collected 11 boards to go along with 12 points across a team-high 33 minutes.

“She’s just building really good, consistent habits,” Frese said. “She doesn’t have to do as much but she wants the big moment … She’s competitive. She’s high motor, high energy. She belongs, and I think that’s the biggest compliment you can give.”

Sellers has acted as the sixth-woman for Maryland this season, being the primary ball handler in non-Owusu and Benzan minutes. When she shares the court, often with Benzan, Sellers plays the role of Owusu — an aggressive slasher and menace off the dribble.

Her role on offense has led the freshman to average 13 points per game, good for fourth on the team.

Reese, on the other hand, has filled in admirably during Diamond Miller’s absence. Her averages of 18.5 points and 12 rebounds lead the way for the Terps.

As a back to the basket center, it’s all about letting the game come to her.

“Just trying to let my rebounds get to my points,” Reese said. “My teammates were feeding me and [Mount St. Mary’s] was much smaller than us, so taking advantage of the inside-out was a big thing that we could do this game.”

Sellers and Reese figure to be key cogs in Maryland’s system for the next few years. Their development thus far has been a welcoming sight to a Terps team looking to compete for a national title.

Their first real test comes Sunday against No. 6 Baylor, but Maryland will first host UNC Wilmington on Thursday.

The Seahawks enter with a 1-1 record after losing their most recent game to Duke, 87-45.

The No. 3 Terps should have no problem corralling UNC Wilmington early. While the Terps struggled to gain separation in the first quarter of their first two games, the last two matchups have seen Maryland outscore its opponents 52-17 in the opening 10 minutes of play.

Part of that is due to Reese and Sellers.

“I loved our start,” Frese said of the effort against the Mountaineers. “That was something that we’ve been talking about just getting out to a hot start. I love that first quarter when you talk about holding them to seven points.”