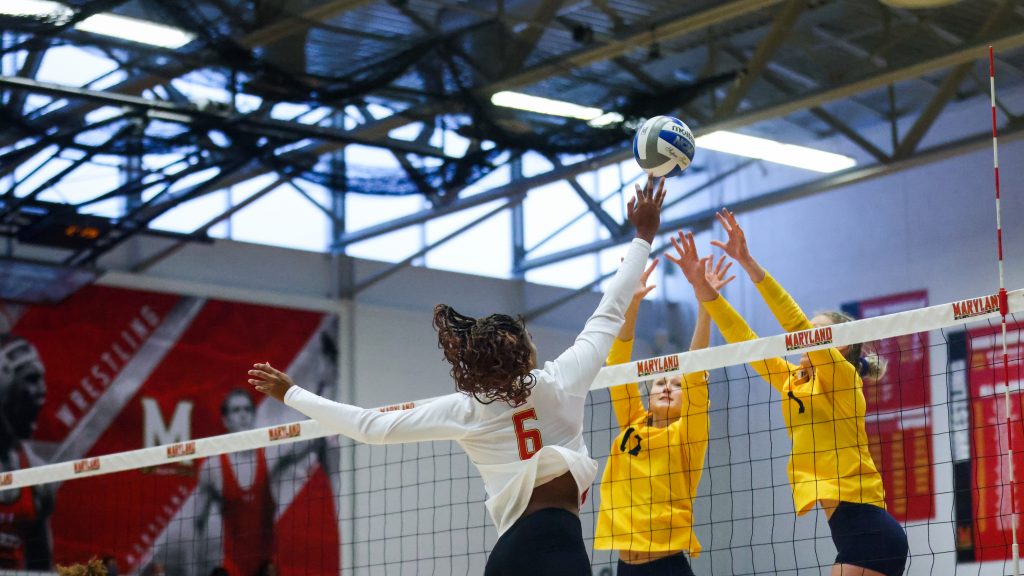 After Mari Hinkle fielded a sizzling Sam Csire serve in the back row, middle blocker Hannah Clayton sent a pummeling spike back at Maryland volleyball’s back row.

Clayton’s kill attempt careened off of Csire’s arms, falling foul for Iowa’s 69th and final kill of the match to the delight of the Hawkeyes’ bench.

“Really disappointing result tonight obviously,” coach Adam Hughes said following the loss. “[We] lost a little confidence, I gotta find a way to get some more confidence back in the group because when they play really well they’ve shown that they can beat anyone.”

The Terps and Hawkeyes went blow-for-blow early in the first set of Saturday’s battle, as each team was hungry to reenter the win column.

Right side hitter Buzzerio parried Rainelle Jones’ offense with two early kills of her own, helping the Hawkeyes keep up with the Terps’ energetic attack.

[Maryland volleyball unable to keep up with No. 11 Nebraska, takes third straight loss, 3-0]

With both teams playing at an aggressive pace, the first set came down to the wire. Iowa landed the first gut punch, rattling off three straight points to force Hughes into burning a timeout.

The Terps quickly responded, digging out of their late hole after an array of spikes from outside hitter Csire. With the match suddenly knotted at 21, it was acting head coach William Tatge that needed to talk things over with his squad.

While both teams exchanged two-point runs following the break, it was Maryland that emerged victorious to take a 1-0 lead.

After Buzzerio’s fourth kill of the set fended off the Terps’ first set point, Rainelle Jones responded with a putaway of her own to push the set to 25-24. On the following point, a Buzzerio spike was blanketed by two Terp blockers to clinch a hard-fought first set win.

The competitive fire of the first set spilled over into the subsequent frame, as neither squad wished to budge in the Big Ten battle.

But this time, the Hawkeyes wouldn’t be denied late.

Spurred by Buzzerio’s dazzling play from the wing, Iowa clocked a .390 hitting percentage in a 25-19 second set victory. The Hawkeyes out-killed the Terps, 20-11, knotting the back-and-forth slugfest at one set apiece.

“I think this time of year people are playing for different things,” Hughes said. “This was senior night for those guys, and we talked about it, we knew that was going to be a challenge… seniors are gonna play as hard as they can.”

And while Hughes’ squad quickly put the loss to bed in the third frame, rushing out to an early five-point advantage, it wasn’t enough to stall Buzzerio and the Hawkeyes.

The Terps looked to be in control of the set deep in the frame, at one point holding multiple set points with a 24-22 advantage. However, Buzzerio and middle blocker Amiya Jones each clocked multiple kills in return to eviscerate Maryland’s once-comfortable advantage.

With the third set knotted at 25, Amiya Jones’ fourth kill of the frame gifted the Hawkeyes a set point of their own. And while Hughes called an emergency timeout to try and stop the bleeding, a Buzzerio service ace on the subsequent point clinched an improbable 27-25 victory for Tatge’s squad.

“They play very scrappy,” Rainelle Jones said. “I feel like [their] setter spread the ball very well, I feel like the middles also did well on their part offensively.”

And while the Terps showed heart to close out the match—going point-for-point throughout the frame— Iowa couldn’t be stopped. Clayton finished Maryland off, converting two kills in the final three points to send Hughes’ squad packing with its fourth straight loss.