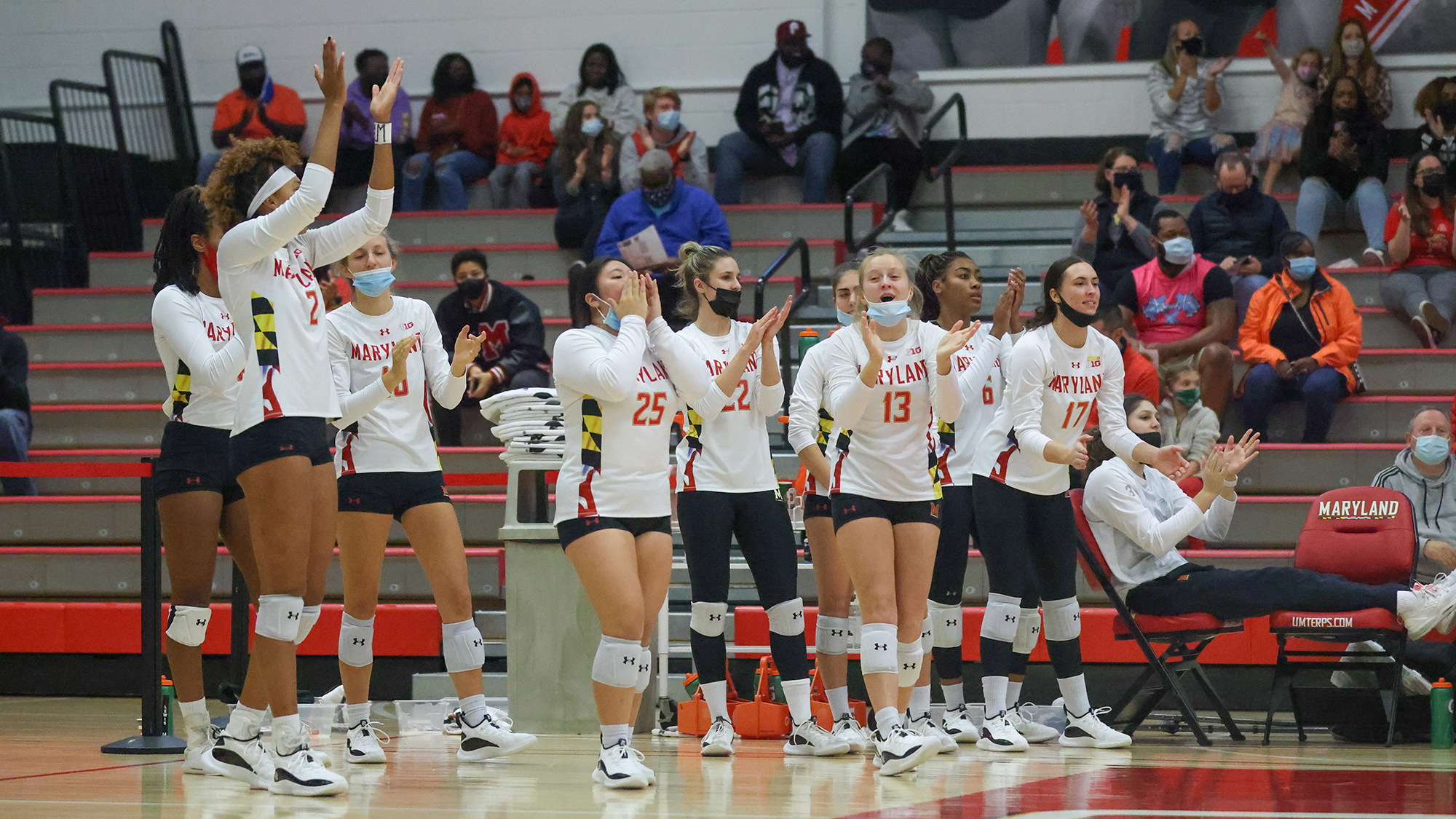 The Maryland bench celebrates a point during the Terps’ 3-0 loss to Michigan on Nov. 7, 2021. (Collin Riviello/The Diamondback)

“We know we [have] to put together a full weekend and be a little bit more consistent,” coach Adam Hughes said. “No excuses by us.”

Hughes’ squad was dealt a tough hand in its latest two-match homestand, playing host to a feisty Michigan squad just days after a Friday evening battle with then-No. 8 Purdue. The Terps won just one total set in their last two matches and will look to rebound on the road following a week of rest and recovery.

Unfortunately for Maryland, the road doesn’t get much easier.

A Friday night date with No. 11 Nebraska will kick off a four-game road trip for Hughes’ squad. The Terps will head to the Devaney Center in hopes of pulling an upset of the touted Cornhuskers before traveling to Iowa to take on the Hawkeyes the next day.

The Devaney Center, which seated more than 8,000 fans in Nebraska’s last home match, adds another element to Maryland’s preparation — most of the Terps have yet to play in front of Nebraska’s raucous fans.

But for Hughes, the challenge of playing in a packed arena is more exciting than daunting for his players.

“I don’t think there’s any tricks to it, just gotta gain that experience,” Hughes said. “I actually feel like [we’d] rather there be people there and have the full experience so that we can learn how to adapt and how to play with it … I think some of the group’s excited because it’s why you play in the Big Ten, you want to play on the big stage.”

The Cornhuskers are fresh off a 3-0 loss to No. 7 Ohio State, hungry to reenter the win column as the NCAA tournament draws near. Legendary coach John Cook’s squad boasts one of the most potent defenses in the country, currently holding opponents to a measly .156 hitting percentage on the season.

While Nebraska poses a sizable threat for a Maryland team desperate to make its first NCAA tournament since 2005, the Terps have taken an introspective approach in preparation for their upcoming slate.

For middle blocker Rainelle Jones, her success hinges on continuing to be a factor on both sides of the ball.

“[I need to] continue to be an offensive threat to the team a lot more,” Jones said. “I feel like defensively, it’s been going very great, and I feel like I need to keep that up. But [offense] is definitely a big goal for us right now.”

Jones, who currently leads the NCAA with a stifling 1.72 blocks per set, will look to captain a Maryland team with tournament aspirations of its own.

The Terps are currently on the outside looking in with about a month left in the regular season, but an upset win over the Cornhuskers would help change their season’s course.

Jones is well aware of that heading into the match.

“This is a big match, we gotta win these in order to make the tournament,” Jones said. “Just gotta get down those points, get down those sets to hopefully make it.”