‘Unheard of’: Gwendolyn Zeckowski’s road back to pole vaulting after Moyamoya diagnosis 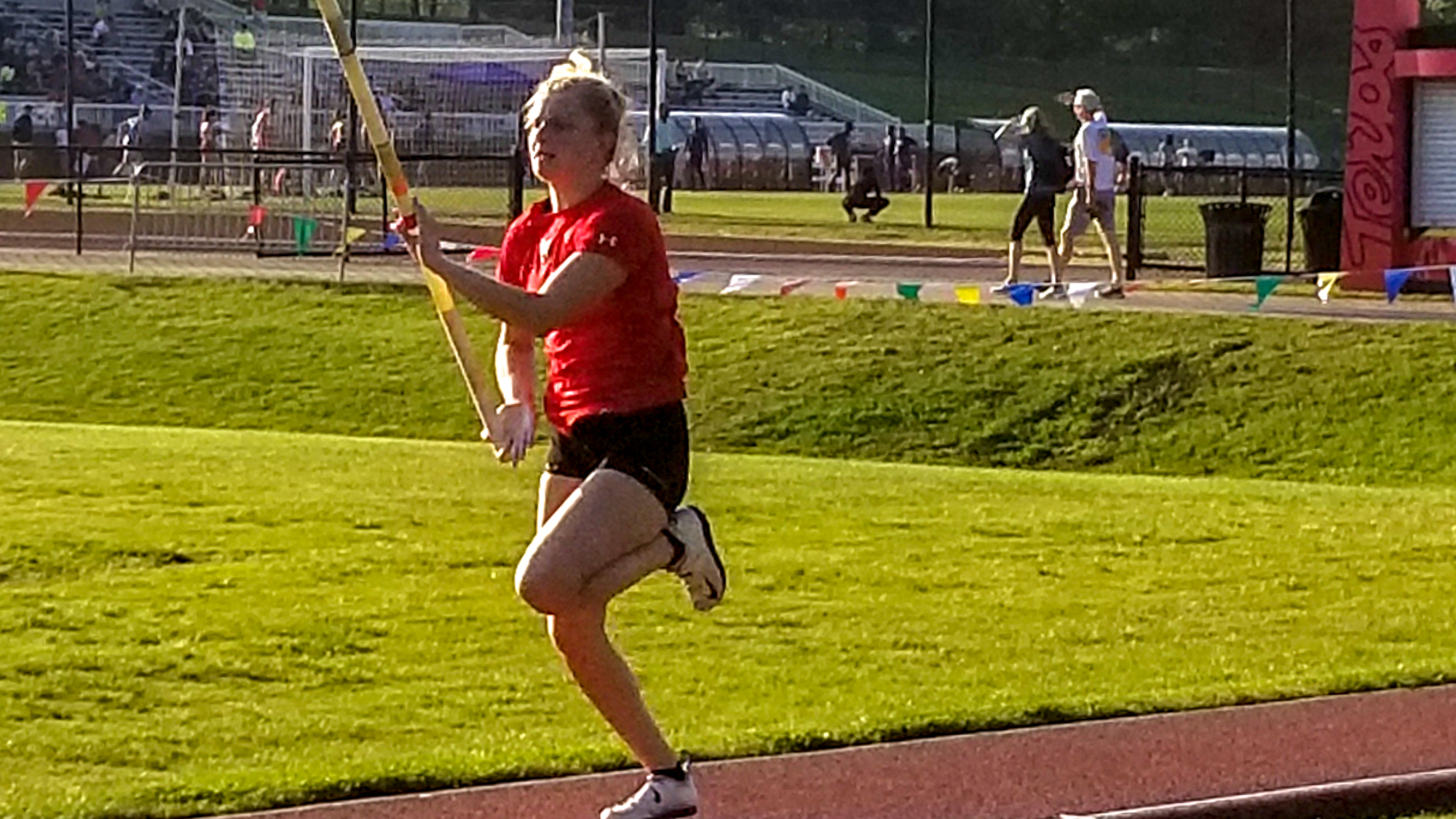 She had been feeling ill, tired and out of sorts throughout the day but pushed through and went to her night physics class like normal.

But when she got there, she started to feel worse. That’s when she knew something was wrong.

“My hand was so numb, and it was completely dropping to the ground,” Zeckowski said. “My whole right side of my body was going numb.”

When she got home, her roommates called her boyfriend, and he took her to the emergency room at the University of Maryland Laurel Medical Center. Zeckowski’s mom, Megan Sennett, then got a call from Zeckowski’s boyfriend.

“As soon as we heard that, my husband and I jumped in the car and drove out,” Sennett said. “We didn’t know what was going on.”

When Sennett arrived at the hospital in Laurel to see her daughter, she noticed she was showing symptoms of a stroke. Knowing her family had a history with strokes, she worried through the night.

“My heart was in my throat the entire time,” Sennett said. “I could definitely tell that something was wrong with her.”

The emergency room didn’t have the equipment to diagnose her, so she was transferred to MedStar Georgetown University Hospital.

Zeckowski went through a series of tests, including a CT scan, an MRI and an EKG. But after receiving a cerebral angiogram, doctors determined Zeckowski had suffered a minor ischemic stroke, and she was diagnosed with Moyamoya disease.

Moyamoya disease is a progressive, noninflammatory disease of the large blood vessels in the brain, according to Dr. Douglas Mayson, an assistant professor of neurology at MedStar Georgetown University Hospital with a subspecialty in stroke and vascular neurology, who helps treat Moyamoya patients.

“It’s pretty serious,” Mayson said. “Most younger people who are otherwise healthy … it’s usually not life threatening. But every time [strokes] happen, there’s some risk of the patient acquiring a really significant disability, and the more strokes you have, the higher that risk goes.”

When Zeckowski’s family learned the news, they couldn’t believe it.

“Our first reaction was that she was only 20 … she’s just starting her life. She’s an elite athlete. How could this be possible,” Sennett said.

Zeckowski began to realize how serious this was, and her athletic career was suddenly in jeopardy.

“I thought that [pole vaulting] was over because I had a stroke and [the doctors] were like, ‘Well, you’re not going to be able to do sports ever again,’” Zeckowski said. “I was like, are you kidding me, this can’t be real.”

Zeckowski and her family then met with doctors at The Johns Hopkins Hospital to get some clarity on the situation in April 2020.

After running another cerebral angiogram, doctors determined that Zeckowski was at risk of another stroke and subsequently admitted to Hopkins. As the doctors predicted, Zeckowski had another stroke.

After running more tests, doctors at Hopkins believed Zeckowski may have had central nervous system vasculitis instead of Moyamoya.

According to Mayson, CNS vasculitis predominantly affects small and medium sized arteries of the brain tissue and spinal cord. It also causes inflammation, primarily of arteries in the brain.

“Generally the treatment for [CNS vasculitis] is medical — usually a high dose of steroids, basically to try to cool off the inflammation,” Mayson said.

Zeckowski and her family needed to choose between treatment options or brain surgery. They decided to give any potential treatments at least one month to work.

So, doctors tried antiviral medicine and gave Zeckowski a high dose of steroids, but there was no change in her brain or signs that she was getting better.

After consulting with doctors at four different hospitals, they confirmed Zeckowski had Moyamoya and determined she needed to travel across the country to get brain surgery at the Stanford Moyamoya Center in California. But this was during the first few months of the COVID-19 pandemic.

“I was like, how are we going to travel? Are we going to have to wear face masks or multiple masks because we’re traveling during a pandemic?” Zeckowski said. “I’m immunocompromised because I’m on steroids. So I was very nervous for that also.”

But taking the risk of traveling across the country during a pandemic and deciding to get brain surgery was worth it to Zeckowski because of the chance to pole vault again.

“[Dr. Gary Steinberg at Stanford] reassured Gwendolyn over and over again that she would pole vault again, and we could not believe it,” Sennett said. “When Gwendolyn heard that, she was just sold, and was convinced that there was no other option than Dr. Steinberg.”

On June 9, 2020, Zeckowski had successful brain surgery, and she was discharged from the hospital two days later.

She had a brief scare the weekend after the surgery when she thought she was having another stroke, but Steinberg assured her that her brain was just getting used to new blood flow, Sennett said.

Later in June, Zeckowski returned home from California where her road to recovery began.

One month after her surgery, Zeckowski began working out again. She started running and walking in intervals and using light weights. After returning to school in August, she slowly progressed and was cleared to begin pole vaulting again in December.

But there were obstacles in the classroom for Zeckowski. She studied hard for tests, only to fail once she took them due to her memory loss. She wasn’t used to that feeling.

“She would come downstairs and just be in absolute tears,” Sennett said. “That was really hard for me to watch because being a student had always come so easy to her.”

But through her persistence, Zeckowski has been able to adjust to the challenges of school thanks to having accommodations such as extra time on exams. She was rewarded for her perseverance, receiving the 2021 Wilma Rudolph Student-Athlete Achievement Award.

Now, Zeckowski is set to return to her sport, too.

During the upcoming indoor track and field season, she’s planning to compete in the pole vault for the first time since her surgery. It was something that didn’t seem possible when she had her first ischemic stroke in February 2020.

“If somebody could rewrite the script, it wouldn’t probably read this way that you would actually end up having brain surgery and come back to the sport like that,” Maryland track and field head coach Andrew Valmon said. “That’s a story that’s kind of unheard of.”

Zeckowski has slowly eased into pole vaulting in the lead up into the season, and said she could not have gotten to this point without her mom.

Sennett was always there for her daughter, whether it was caring for her after surgery or being an emotional backbone to keep her going.

“I don’t think that I could ask for a better friend,” Zeckowski said. “She’s my friend. She’s my mom. She’s my everything.”

The whole experience changed Zeckowski. She used to be more isolated from her parents and would typically only focus on herself.

Now, she’s more appreciative of the life she has. And with this new opportunity comes new goals — graduation, a potential pursuit of a master’s degree and pole vaulting 14 feet.

“I think about before I had this stroke and how I was and how I acted,” Zeckowski said. “I don’t think I would ever want to go back to how I was before the stroke.”