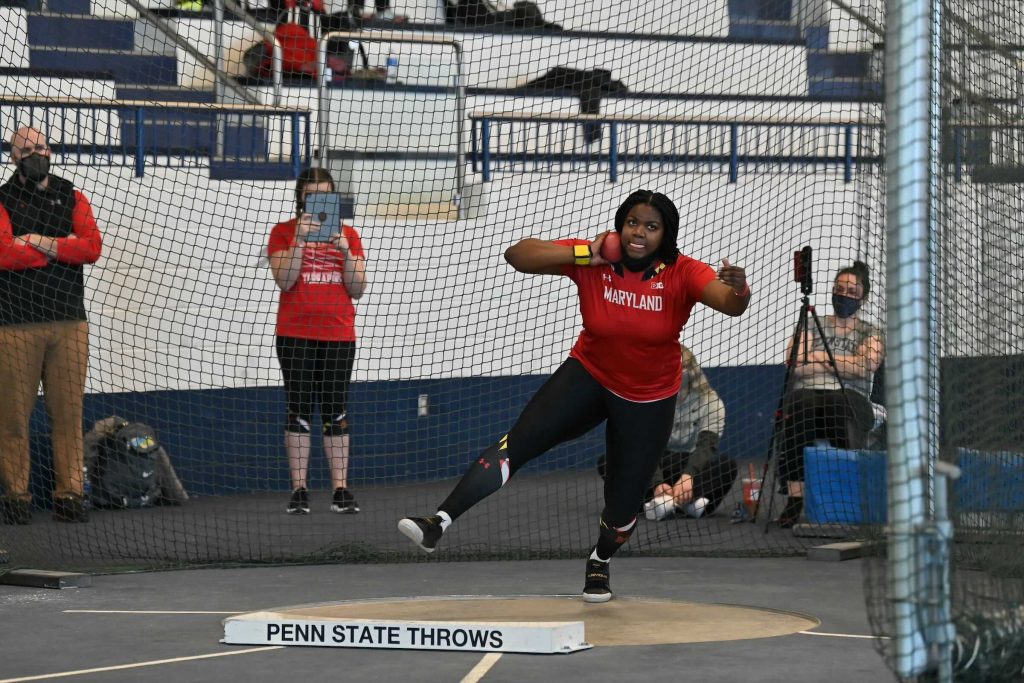 For the first week of Maryland track and field’s season, Angel Nkwonta was the star performer, breaking the Maryland program record in the weight toss with a distance of 20.62 meters.

In the second event, it was Nkwonta again, who made headlines by shattering her own weight toss record from the week prior — a second consecutive strong showing off the track for the Terps.

But at the Penn State Tri Meet Saturday, all the attention was on the track.

And after dominating in the air all season, Maryland showed its game on the ground is just as potent.

It was as if distance didn’t seem to matter for the women’s team, which delivered strong performances in nearly every race.

The Terps were headlined by junior Jaida Smith, who edged the competition in the women’s 200m with a time of 24.75 seconds. Bria Mack was on the opposing side of a razor close finish, placing second in the women’s 60 meter dash with a time of 7.62 seconds — less than a tenth of a second from a victory.

In what’s been typical Maryland fashion this season, the Terps made history. Kami Joi Hickson followed up with a third place finish in the women’s 600m, posting a time of 1:34:68 — earning a place in the program record books with the sixth-best finish ever.

The Terps also had a strong showing in the women’s 60m hurdles, with Nadia Hackett capturing third place with a time of 8.61 seconds.

While the story of the day was Maryland’s performance on the track, it was as equally dominant in the air as it had been all season.

Although it was an uncharacteristically off day for Nkwonta — who whiffed all but one of her throws in the weight toss — one was all she needed as she threw her lone weight for a distance of 19.43 meters, good for first. Kamryn Henderson and Alice Barnsdale finished fourth and fifth with distances of 17.25m and 16.61m, respectively.

Despite missing on four out of her six attempts, Nkwonta also delivered a strong performance in the shot put, finishing in second with a distance of 15.32 meters, almost exactly an inch away from a first place finish.

The Terps’ stellar performance on the track continued with several strong showings from the Maryland men’s team.

However, Ewan was far from finished. The sophomore also placed second in the men’s 200m dash with a time of 22.33 seconds — less than a fraction of a second from first.

History was made on the men’s side of the track as well as Brian Evans’ time of 48.01s in the men’s 400m – placing him third – ranked as the sixth-best time in program history. Joining him in the record books was senior Brady Snelson, who placed second in the men’s 800m with a PR of 1:53:43, giving him the 11th-best time in school history.

Off the track, sophomore Gerald Norgbe delivered a strong performance in the triple jump, leaping for a distance of 14.28m to finish second.

Meanwhile, Chris Spiess showed no signs of rust competing in what was Maryland’s first pole vault event of the year. The event went into a three-way sudden death with the Terps’ senior coming in second, leaping for a height of 4.66m.

After a third straight strong showing in State College, Maryland will look to keep their hot streak moving as they head to Geneva, Ohio, to compete at Spire Institute next weekend.

CORRECTION: Due to a reporting error, a previous version of this article misspelled Angel Nkwonta’s last name. This story has been updated.