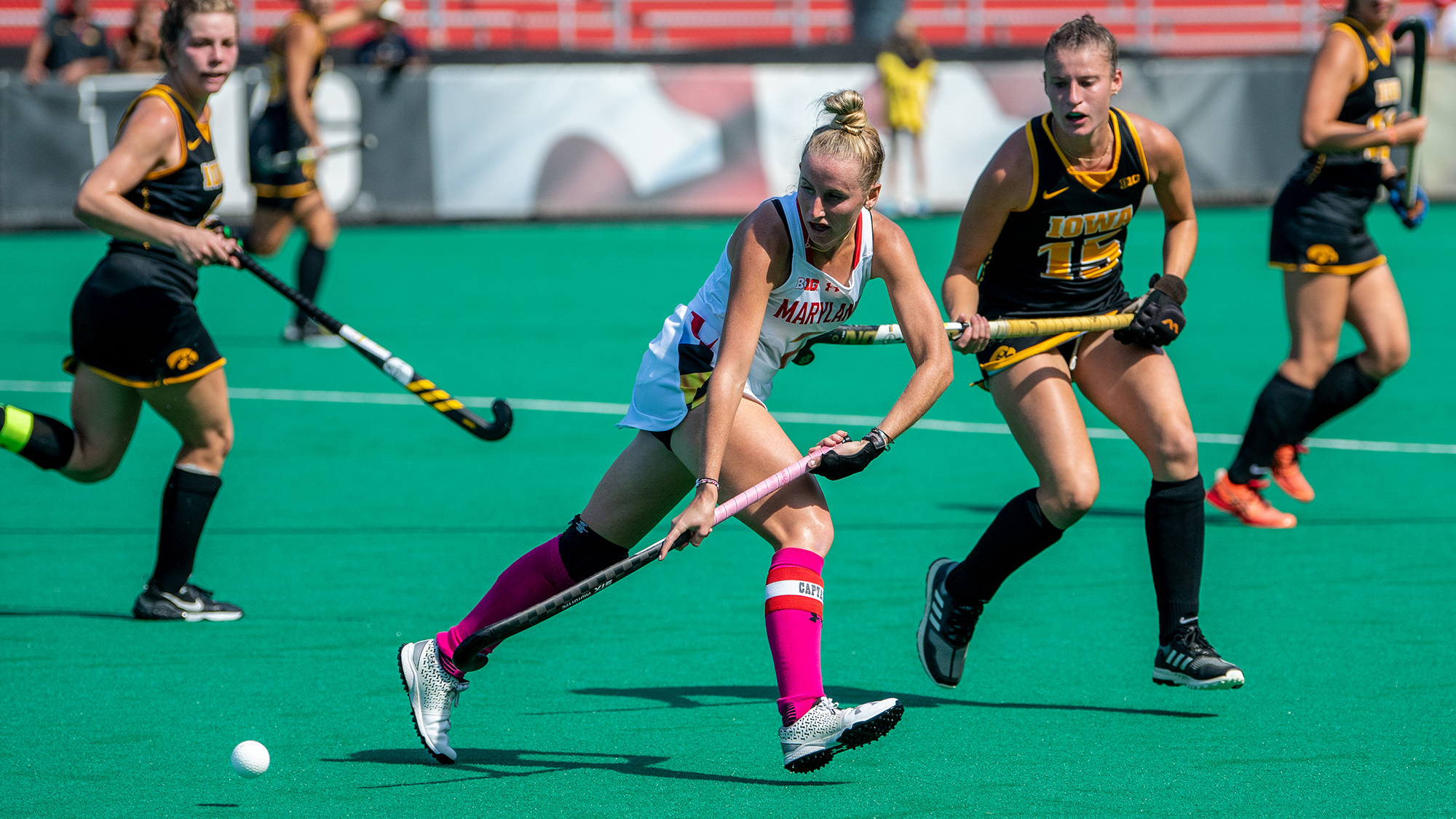 With heavy rain pouring down on her, Mayv Clune moved on the damp field toward the goal and found open space right in front of Ohio State’s keeper during the second quarter of Maryland field hockey’s 6-0 shutout of the Buckeyes.

Margot Lawn noticed and sent a deep pass toward her, all the way from behind the 23-meter line. Clune laid down her stick and flipped the ball into the air — and it dropped into the back of the goal.

Clune raised her arm and smiled.

She hadn’t scored all season. And on her senior day — possibly her final game at the Field Hockey and Lacrosse Complex after five seasons with the team — with her whole family in the stands, she got to experience that feeling one more time.

“I’m just grateful for the opportunity to be out on the field, no matter what happens,” Clune said.

Clune was one of six different goal scorers for the Terps on Friday — four of whom are seniors.

That’s not unusual for coach Missy Meharg’s squad. They’ve spread the wealth all year, as 14 different players scored over the 18-match regular season.

The array of goal scorers Friday — and all season long — can be attributed to Maryland’s selfless style. Meharg’s players are always looking to help the team win instead of padding their own numbers.

They don’t lock themselves into certain positions — they can move up and down the pitch and go wherever needed.

“It means that you are willing to move from the front line into the midfield, and the [midfielders] into the front line,” Meharg said. “A lot of different people scoring goals.”

The Terps took 322 shots — 200 of which were on goal — over the regular season. That ranks second in the Big Ten, trailing Northwestern’s 350. But all those shots only turned into 57 goals, placing them at a tie for third in the conference.

[No. 4 Maryland field hockey has newfound confidence after beating No. 2 Michigan]

This offense amounted to a 13-5 finish in the regular season, and a 4-4 record in Big Ten play. That conference split made the No. 4 Terps just the No. 6-seed in the Big Ten tournament, giving them another showdown with No. 3-seed Penn State after the Nittany Lions bested them in overtime in College Park during the regular season.

Still, Maryland couldn’t have ended the regular season on a much better note. The most recent addition to its current four-game win streak was an all-around offensive performance where 12 shots on net turned into six goals.

“We’ve looked at our numbers … in terms of shot attempts. And today we hit our markers on it,” Meharg said. “We do it in practice, so it’s nice to see it in a match.”

Maryland will now head to Piscataway, New Jersey, to compete in a tournament with the majority of the nation’s top-10 schools.

“We’re playing better and better every week, but there’s still so much room for improvement,” Riley Donnelly said. “The Big Ten is such a strong conference, and it’s going to be a really great tournament.”