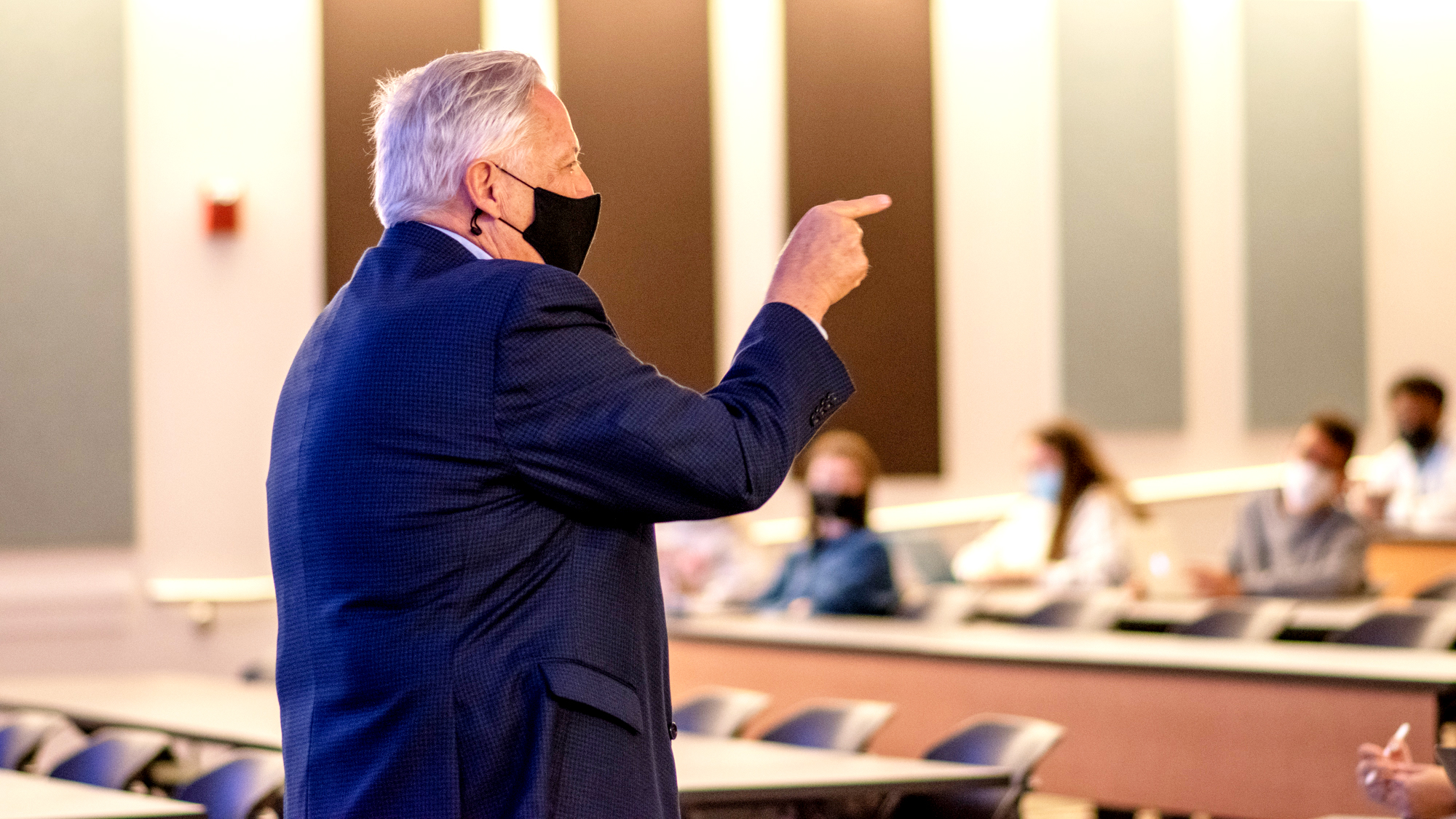 Gerard Evans teaches his Advocacy in the American Political System class in Tawes Hall on Oct. 11, 2021. Evans is a lobbyist and lawyer who advocates for a range of interests in Maryland. (Autumn Hengen/The Diamondback)

By Maxine Friedman
For The Diamondback

As Gerard Evans sat casually on the steps by Tawes Hall’s pillars, with one knee up and an arm laying right on top, he reflected on his long and storied past at the University of Maryland. He looked up at the building and began to laugh.

“Tawes didn’t look like this,” the lecturer recalled, still smiling.

Evans had visited the building more than just a few times over the course of his academic and professional life.

Evans had attended the University of Maryland as a graduate student to receive his masters in public policy. He later became one of the longest-running and most successful lobbyists in the state of Maryland and has had over 40 years of experience in the Maryland General Assembly. On top of that, he serves as a public policy lecturer at this university.

Evans’ long career in policy making, lobbying and politics has shaped his teaching style, telling students stories from his career to inform lectures, some of his students and colleagues said.

“We’re learning about the General Assembly, and he’s worked with them so much. So [for] everything we learn [about], he has some kind of story or some kind of experience that he talks about,” said Simone Volman, a sophomore government and politics and public policy major, as well as a student in Evans’ public policy class. “It’s interesting.”

He returned to Tawes Hall, which was once Tawes Theatre, in 1992 when Clinton participated in a Democratic debate for that year’s presidential election, Evans recalled.

“It was quite a to-do here when we had a democratic debate here on campus,” Evans said. “It was a lot of fun.”

Evans soon returned to this university, teaching public policy to graduate students under the education department. The public policy school, now located in Van Munching Hall, had yet to exist.

In 1999, just a few years into teaching at the University of Maryland, Evans, along with the late Maryland State Delegate Tony Fulton, was charged with 11 counts of mail and wire fraud by a federal grand jury.

Evans was indicted on nine of 11 charges “out of his lobbying activities,” the case said. He was sentenced the following year to 30 months in prison, was fined, and was required to pay restitution.

“It was the best thing that ever happened to me,” Evans said. “Unless you go through the fire of challenge, you don’t really know yourself, and you don’t know your friends and your clients.”

Yet, even in his worst of moments, Evans remained positive and willing to help others who needed it, working as a law librarian and a GED teacher during his time in prison.

Evans said he got a perspective he would have never been able to get had he not been to prison.

“Our criminal justice system is completely broken. And if you’re a person of color — like if you look at the camp I was in, it was 250 people, most people [being] of color — they had no business being up there,” he said.

As soon as his sentence was over, he went straight to work. He returned to this university and began teaching pro-bono.

Now, 22 years after serving his sentence, Evans has continued teaching public policy to nearly 100 students in all majors at this university, right back in Tawes Hall.

“I’ve heard nothing but positive things,” said Dr. Nina Harris, the associate dean of academic programs and student services. “Anytime you have a long-term adjunct in a higher education environment, that means that they’re good.”

Some students have noted Evans’ openness and willingness to share stories of both his professional and personal life — giving them a full insight into his life.

“He’s very knowledgeable. He’s probably one of the smartest professors I’ve had. He is very funny — has a very good sense of humor. He’s very, very easygoing,” Volman said. “And he definitely treats his students like adults, and like someone you can actually have a conversation with.”

For Andrew Friedson, a former student of Evans and current Montgomery County council member, taking Evans’ class gave him an experience different from any other.

“It was an interesting opportunity to hear from, and learn from, somebody with a lot of practical experience,” Friedson said.

In recent years, Friedson, who studied government and politics at this university and graduated in 2008, came full circle with Evans.

Before becoming council member, Friedson was working as the deputy chief of staff and senior advisor for the comptroller of Maryland while Evans was advocating and lobbying for his clients. Friedson said he worked with Evans “fairly regularly” on many policy issues.

“[Evans’ class] certainly has been a positive influence on my professional career, and partially because of the relationship that we’ve been able to build,” Friedson said.

In the classroom, some students have found a similar positive experience.

“Every student I know who’s had him loved him. Everyone I talked to is like, ‘Please take his class, he’s amazing.’ And I agree,” Volman said.

Evans continues to walk into class at the start of every work week knowing what he has overcome and what he has achieved was not all “for nothing.”

In fact, it was all for something: his students.

“[Undergraduate work] is supposed to be about awakening motivations and ideas,” Evans said. “I hope I’m provocative and that they begin to look at the world around them in a different way.”