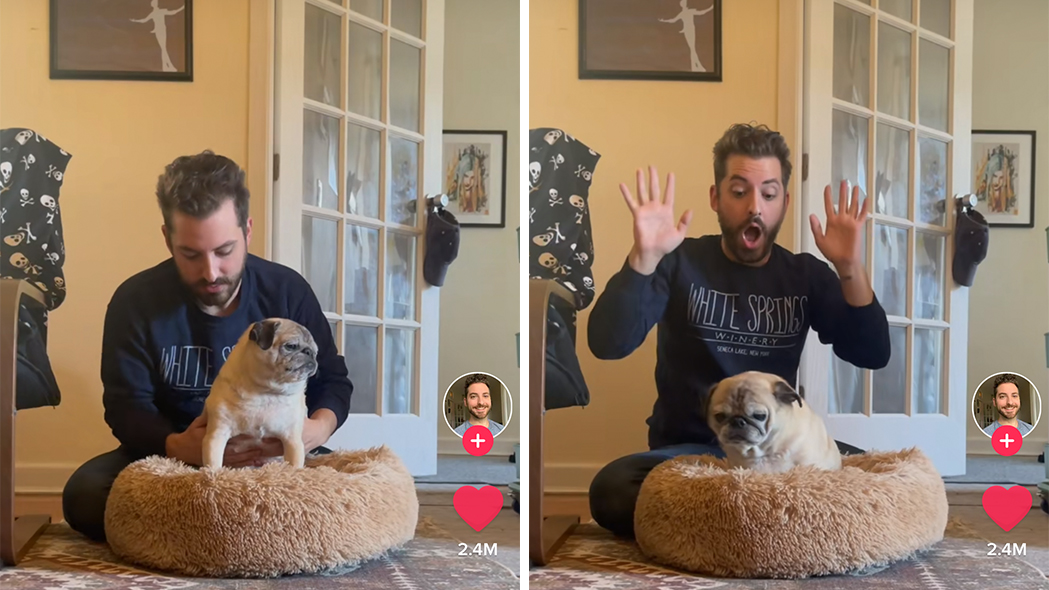 When some people wake up in the morning they check the news. Others read their horoscopes or go on a walk. But TikTok user @jongraz has a very special routine each morning: checking to see if his dog has bones.

Well, not literally. Of course his 13-year-old pug, Noodle, does have bones, but it’s rather a question of whether his dog will be semi-active each day.

Most mornings, Jonathan Graziano attempts to stand up his dog Noodle to determine if it is a “bones day,” or a “no bones day.” The test is quite simple. He sits Noodle up and depending on whether Noodle can maintain his balance for a few seconds determines whether it’s a bones or a no bones day. If he remains standing, it’s a bones day, if he simply flops back into his bed, it’s a no bones day.

In recent weeks, Noodle has gone viral beyond proportion. Each day, over a million people have checked in to see whether or not it is a bones or no bones day.

Graziano’s videos started as a fun trend for him to do each day with his dog. In a recent video, he explained how the bones versus no bones phenomenon started.

[A night out in Old Town: A tell all of College Park nightlife]

Graziano adopted Noodle when the pug was seven years old. Graziano said it became very apparent after adopting Noodle that, “when he doesn’t want to go on walkies, he will not go on walkies.”

Now, no bones versus bones days are almost like a horoscope. They’re symbols that are essentially meant to represent the type of day you’re going to have.

A bones day is a day to celebrate. When Noodle has bones, it means it’s a day to treat yourself and be engaged with life, school and the world around you. Get done what you need to get done and triumphantly jump over every hurdle in your way.

Noodle and Graziano like to use bones days to encourage their fans to make the moves they need to make such as asking for the raise you deserve, buying an expensive candle you’ve been eyeing or even buying a jet ski.

A no bones day is a day where things just don’t seem to go right. It’s not a symbol of misfortune but rather a time of reflection. It’s meant to have you take a step back from the hustle and bustle of the world and just relax sans-bones.

No bones days can be used for many things. They cite real world scenarios such as canceling going out for drinks with your imaginary co-worker Liz and her boyfriend you don’t like, avoiding telling your sister you hate her husband and just avoiding risks in general that day.

[Review: PinkPantheress’ debut album ‘to hell with it’ defines her sound]

Noodle has become a viral phenomenon because of the sense of relatability — the universal feeling of knowing when it’s just one of those days where nothing feels right and all you want to do is lay down like you have no bones.

At the same time, it’s a universal feeling when you have a day where you triumphantly stand and just feel like you can take on the world and want to reward yourself.

Noodle has become such a fun staple of many people’s everyday life recently because of commonality. So whether it’s a bones day or a no bones day, I can only assume Noodle wishes a good day to us all.