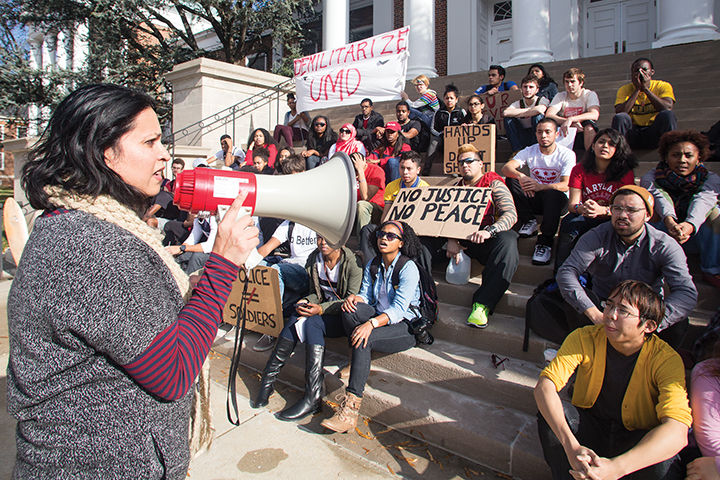 Despite the critical mass of both groups, the student population does not reflect the state’s diversity. Black students at this university are a much smaller proportion of our student body than the 33 percent of Maryland public highschoolers identified as Black, and Latinx students are also underrepresented.

Still, the university’s unique demographics present an opportunity for building solidarity. And the current moment underscores the need. Over the past year, much of the nation’s attention was on a wave of COVID-19-related violence against Asian Americans powered by false narratives saying Chinese people and others of Asian descent spread the virus. Over that same period, hate crimes against Black Americans rose as well. The most recent data show that in 2020, the FBI recorded 274 anti-Asian hate crimes and 2,755 anti-Black hate crimes. These trends show that both Asian and Black Americans face racial discrimination, but their experiences are also distinct.

Our campus history reflects the stories of Black and Asian American communities more broadly. The first Asian student to graduate from our campus was Pyon Su in 1891 and in 1915, Chunjen Chen, another Asian student, enrolled. Both attended the university during a period of “Asian Exclusion,” when the United States’ laws specifically barred people from Asia from immigrating, with the exception of diplomats like Su and scholars like Chen.

The legacies of this past remain. Black students are underrepresented in large part because of residential and educational segregation in the state. Prince George’s County is home to some of the wealthiest Black neighborhoods in the nation, but the value of homes in those neighborhoods remain depressed when compared to those in mostly white and Asian neighborhoods in Montgomery and Howard counties. The wealth associated with these homes is a major predictor of educational attainment and access.

Maryland schools remain stubbornly segregated with dire consequences for educational equity. Studies conducted within the last decade show the majority of Black students in our state attend schools that are 90-100 percent non-white. And highly experienced teachers with more training are much less likely to be teaching at certain schools. Further, a recent study shows even within more integrated schools, low-income Black and Latinx students are more likely to be assigned less effective teachers than white and Asian American students.

The proportion of Black students at this university has never reached 16 percent and fell to a three-decade low of 7.3 percent in 2018. But lack of access to our flagship university should not be treated as a problem that only affects Black students. Barriers to higher education that affect Black student enrollment also negatively impact many Latinx, Native American and smaller Asian American groups, such as Cambodian, Hmong and Bhutanese students. Understanding and advocating to remove these barriers should be the charge for all students on our campus, and today an increasing number of those students are Asian American.

A coalition that includes Black and Asian American student leadership with other marginalized students could be an especially powerful one and would build on promising past examples of cross-racial solidarity among students. In 2020, more than 20 student organizations — including the Asian American Student Union, South Asian Student Association, Black Student Union, Political Latinxs United for Movement and Action in Society and Black Honors Caucus — called on the university to eliminate standardized tests in admissions because these tests pose an unfair barrier to educational access for Black, Latinx and Native American students.

Black and Asian American students have been working together in less formal ways to address the campus’ investment in policing policies with disproportionately negative effects on Black people, such as the militarization of campus police and purchasing relationships with the Maryland Correctional Enterprises, and to address hate incidents.There is work to do. Some of the most visible opponents of efforts to increase access to magnet school programs in Montgomery County and to integrate public schools in Howard County have been Asian American. But, this only makes the case for solidarity more critical. The Asian American Studies Program and African American Studies Department can offer courses that focus on race and racism affecting both communities. Asian American and Black student organizations can develop joint programs to address educational access to our university and demand departments hire more faculty of color. The Asian American Studies Program, African American Studies Department, with other co-sponsors, will engage in a community forum to explore and deepen Black-Asian American solidarity further this fall semester. Let’s not let this opportunity pass us by.

Dr. Jason Nichols is a senior lecturer in the Department of African American studies. He can be reached at jan@umd.edu.

Marshal Washington is an academic advisor in the African American Studies department. He can be reached at lahsram9@umd.edu.

Dr. Rossina Zamora Liu is an assistant clinical professor in the College of Education. She can be reached at rzliu@umd.edu.

Jennifer Enriquez is the coordinator for Asian Pacific Islander and Desi American Student Involvement and Advocacy. She can be reached at mge@umd.edu.

Dr. Julie Park is an associate professor of sociology and the director of Asian American Studies. She can be reached at juliepar@umd.edu.

Due to an editing error, a previous version of this column’s byline misstated Jennifer Enriquez and Marshall Washington’s jobs. Enriquez is the coordinator for Asian Pacific Islander and Desi American Student Involvement and Advocacy and Washington is an academic advisor in the African American Studies department. The byline also misstated Dr. Rossina Zamora Liu’s name and misidentified Dr. Julie Park’s position at this university. This column has been updated.