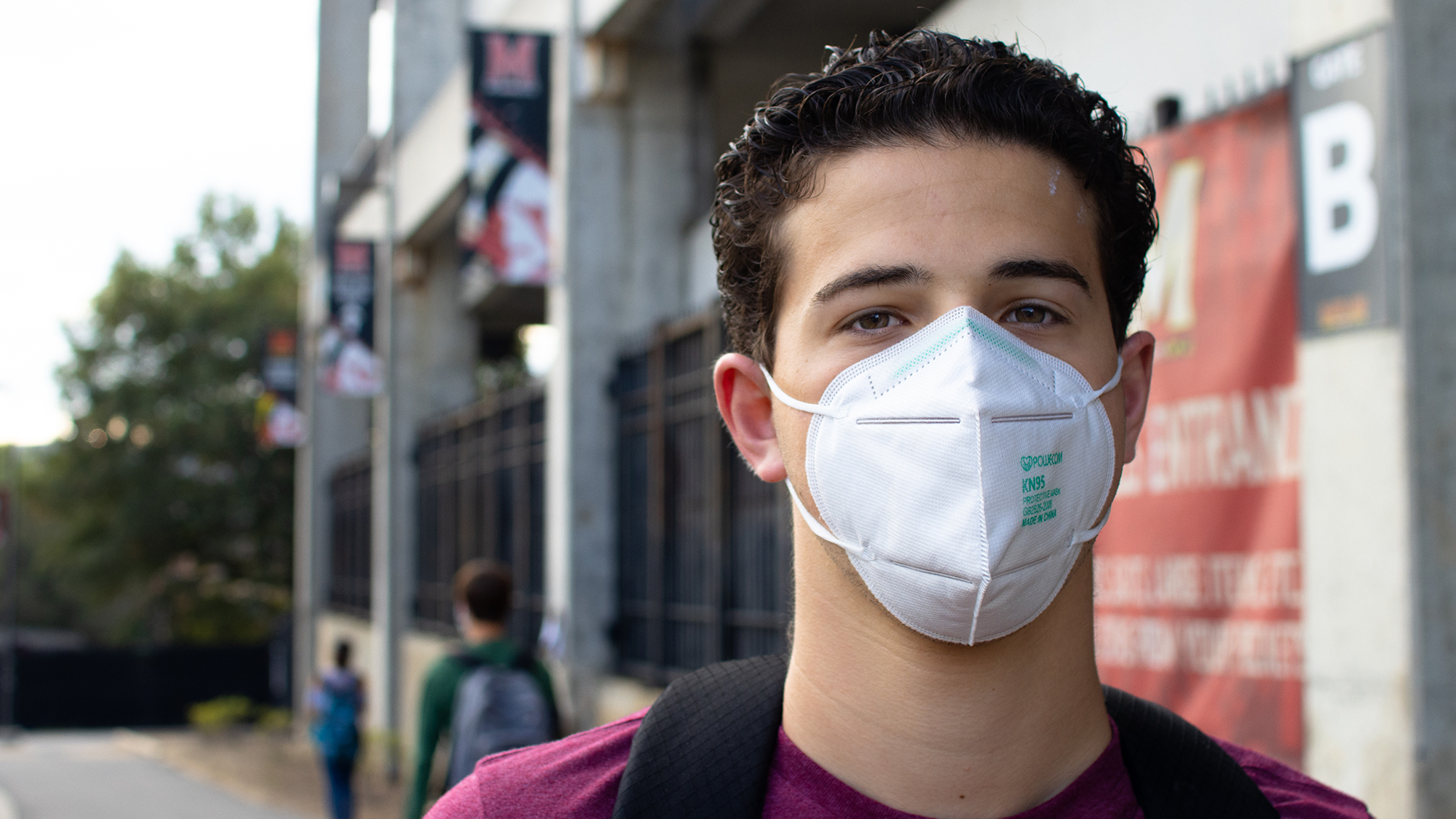 Student Teddy Britton outside of the testing center at Maryland Stadium on Oct. 4, 2021. (Kurt Leinemann/The Diamondback)

Out of the 50,000 University of Maryland community members, about 868 people have medical or religious exemptions that allow them to return to the campus unvaccinated, according to a university statement on Sept. 29.

Unvaccinated students, regardless of exemption, are required to get tested twice a week and wear masks indoors and in crowded outdoor spaces. For students who have religious beliefs or medical conditions that prevent them from immediately getting vaccinated, the requirements have brought mixed feelings of ease and stress.

The medical exemptions are largely for people who are allergic to ingredients in the vaccines, or have a physical condition “such that immunization is not currently considered safe,” according to the university’s medical exemption application. As of Sept. 29, 81 students have been granted a medical exemption by this university, the statement read.

Teddy Britton, a junior government and politics major, said it wasn’t a “big deal” to adhere to the testing requirements.

“I just wake up a little earlier than I expect to,” Britton said. “You just get a routine.”

As of Sept. 2, 79 students were disenrolled for noncompliance of the vaccine mandate.

Religious exemptions require a statement explaining why immunization goes against the applicant’s “sincerely held religious belief” and whether that applies to all immunization, according to the university’s medical exemption application. But they may not be granted an exemption if “it creates an undue hardship for the University,” according to the application. As of Sept. 29, the university has granted 787 religious exemptions.

Andrew Cubbler, a freshman criminology and criminal justice major, said he accepted that he would have to adhere to the testing requirement when he applied for a religious exemption.

“I have my own reasons, everyone has their own reasons,” Cubbler said. “I knew the position I was in.”

Even though he was unvaccinated, he said he was okay with people on the campus who chose to go maskless around him, “as long as it makes you happy.”

“I’m very big on everyone just living their own life,” he said. “Everyone has their own beliefs, their own morals, whatever.”

The university’s main testing site is at Maryland Stadium, where asymptomatic campus community members can receive PCR coronavirus tests, according to the university’s testing schedule.

Kappes said he would’ve gotten vaccinated if not for “a really serious condition,” leaving him to get tested between wrestling practice and class.

“It just makes my day really cramped,” the sophomore kinesiology major said, still sweating after practice and late for his class.

As a college athlete, Kappes also has to get tested with his athletic trainers once a week. While he said Maryland Stadium was the best location for testing for the general population, “it would be nice if I didn’t have to come here.”

As of Wednesday, 98.1 percent of the campus population was fully vaccinated. This is overwhelmingly higher than the 72 percent vaccination rate of Prince George’s County adult residents and is one of the highest in all Big Ten schools that have made their vaccination rates publicly available.

“I think that, in general, people that I’ve talked to are relieved that now our campus vaccination rate is extremely high,” Deng said. “98 percent is definitely enough to reach the herd immunity threshold.”

Compared with last year, before vaccines were widely available in the United States, Kappes said it was nice to see a return to normal.